← The Billionaire’s Battle!
Dogs ate a drone that landed in their backyard, here’s a refresher on where you can fly →

Bags of Gold for Our Pollies? Na don’t be Silly! – ConspiracyOz 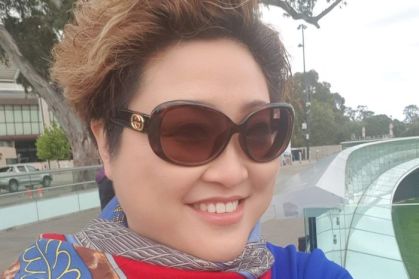 Photo: AusGold director and owner Sally Zou is a major donor to the Liberal Party. (Supplied)

Opposition Leader Steven Marshall has admitted Chinese mining magnate Sally Zou has been to his house, but stressed he had not received any personal gifts from her.

This morning Mr Marshall faced further questioning over a potential $1.2 million donation from Ms Zou, which she tweeted about last week.

Now, more information about the $1,212,018 cheque has emerged — it appears to be the same date as Mr Marshall’s birthday.

In a tweet, Labor Treasurer Tom Koutsantonis pointed out the exact amount of the donation spelled out Mr Marshall’s birthday this year, January 21, 2018. 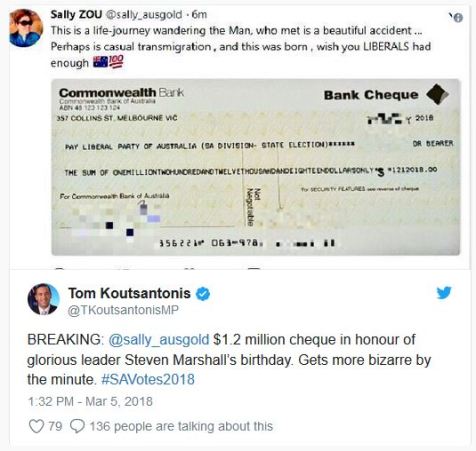 Earlier today, Mr Marshall told ABC Radio Adelaide the party had not received the cheque, but there had been previous donations.

“All of that has been disclosed, she’s made past donations, last year and the year before in the lead-up to the federal election and other donations,” he said.

“All of those donations have been reported as per the legislation.

“The Liberal Party has absolutely nothing to hide here.”

Mr Marshall said Ms Zou had attended functions at his house and had not received any personal gifts from her.

“Everything that we need to do legally is done legally.”

Mr Marshall said the “Liberal Party’s policy agenda is not up for grabs” and no undertakings had been given.

“Absolutely not … I can’t make this any clearer,” he said.

Zou was invited to Labor fundraiser

Premier Jay Weatherill this morning denied he or the Labor Government had any dealings with Ms Zou in relation to donations.

But the Liberal Party has provided the ABC with a letter showing Labor’s fundraising arm, SA Progressive Business, invited Ms Zou to a fundraising dinner in October last year.

It is understood Ms Zou did not attend the function.

Mr Weatherill said he could have met Ms Zou at a function, but had spoken only a few words with her.

Ms Zou is one of the state Liberal Party’s biggest donors, with her AusGold Mining Group providing the party with hundreds of thousands of dollars within the past year alone.

Little is known about Ms Zou, who closely guards her public profile and has an enigmatic social media presence, often tweeting then deleting.

She has a penchant for running full-page advertisements in newspapers on subject matter ranging from real estate to food.

Ms Zou is also a key sponsor of the Port Power AFL club, and last year provided $88,888 in a single donation to the Liberals — eight is considered a lucky number in China.

Ms Zou made headlines last year after setting up a company named after the Foreign Minister, called the “Julie Bishop Glorious Foundation”.

Ms Bishop was quizzed in Parliament, and insisted she had never heard of such a foundation until the matter was raised with her by the media.

He said the Labor Party received $1.5 million from the Shop Distributive and Allied Employees Association (SDA) and the union did that to influence the Government’s position on shop trading hours.

“Cue the smear, two weeks from the election you knew it was always going to happen,” Mr Marshall said.

“Labor love the fear, the smear because they have nothing left.”

Mr Weatherill said any money the Labor Party received from unions would be used to “advocate for working people”.

“That’s what they want us to do with that money and that’s what we do,” he said.

“The real question is what is Sally Zou buying for a $1.2 million donation.

“That’s what the Liberal Party needs to answer.”

Posted on March 11, 2018, in ConspiracyOz Posts. Bookmark the permalink. 1 Comment.

← The Billionaire’s Battle!
Dogs ate a drone that landed in their backyard, here’s a refresher on where you can fly →