Dogs ate a drone that landed in their backyard, here’s a refresher on where you can fly 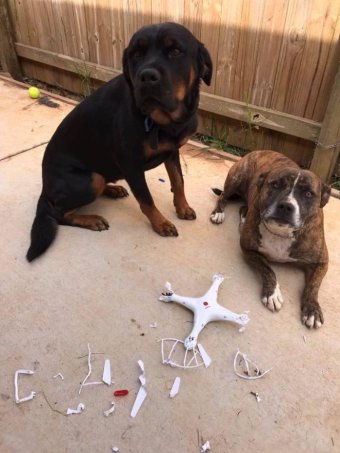 Photo: The two dogs chewed up this drone after it landed in their backyard. (Facebook)

This drone’s certainly gone to the dogs — in more ways than one.

Pets Layla and Jed made mince meat of the plastic contraption after it landed in the backyard of the family home at Kallangur, north of Brisbane, over the weekend.

Tongue firmly in cheek, their owner posted a photo of the destroyed copter to Facebook, writing:

“If this was your drone flying around Kallangur thanks for the new toy for our dogs … Safe to say you won’t be getting it back.”

It got a good laugh from some.

It also raised the question — where are we allowed to fly drones?

It depends on many things — where you are and who’s around you, for starters.

“You must stay 30 metres away from other people, must not fly around crowds or groups of people, must not cause a risk or hazard to people, property, or other aircraft,” Civil Aviation Safety Authority (CASA) spokesman Peter Gibson said.

“So flying your drone in any way that breaks any of those rules is an offence and you could end up with a big fine of more than $10,000.

Mr Gibson said without having an exact location, it was hard to say whether any rules were broken in this case.

But he didn’t say it was a good idea, either.

“I think this incident with the dogs and the drone shows that flying drones around built-up suburban areas is just a really dumb idea,” Mr Gibson said.

“Keep your drones to open areas and keep it away from where there’s lots of people or pets.”

CASA receives about 100 complaints about drones per week

The most common complaint — drones being flown too closely to other people.

“We investigate quite a number of these where there’s evidence of potential breaches, and issue fines when it’s appropriate. We also do a lot of warning people about their drone behaviour,” Mr Gibson said.

Photo: There are rules surrounding the operation of drones. (Pixabay: succo, CC0)

He said evidence was key.

“The most important bit of evidence we need from people when they’re making complaints about drones is of course to identify who was flying the drone. That often can be difficult, but we really do have to have that sort of information,” he said.

“Videos or photos are really useful as well.”

Mr Gibson said those flying drones for fun should download the Can I Fly There? app.

“It’s free, it tells you whether it’s safe to fly in your location. It also gives you the safety rules. It’s an essential tool for flying your drone.”

Rules for flying a drone

Posted on March 18, 2018, in ConspiracyOz Posts. Bookmark the permalink. Leave a comment.