To Flood or Not to Flood? – ConspiracyOz

Why no more Rain making News from Atlant since then? – Mick Raven

Australian Rain Technologies (ART) has completed four rainfall enhancement trials
within Australia, using a ground-based, ion-emitting technology known as Atlant.
The first two trials were located in Queensland, Australia. The third trial, which is the
subject of this report, was conducted in South Australia in the Mt. Lofty Ranges,
which are located south east of the Adelaide metropolitan area. The trial was operated
from August to November 2008 inclusive. A fourth trial with Atlant devices in the
southeastern and northeastern Mt Lofty Ranges ran from August to early December
2009.

The first Atlant trial was conducted near the Wivenhoe Dam, which is the main
catchment area that supplies the city of Brisbane. This Wivenhoe Trial took place in
the months of May and June 2007.

The second trial was located at Paradise Dam,
which is 80km southwest of Bundaberg in the Wide Bay and Burnett River
catchment. The duration of this trial was from January to May 2008. Both trials were
conducted with the aim of measuring and comparing rainfall in a target area under the
influence of Atlant with rainfall in geographically distinct control areas, and both
trials were supervised by the University of Queensland.

Average monthly rainfall was substantially higher in the target areas in both trials.
However, the historical variability in rainfall between target and control areas made it difficult
to reach a conclusion regarding the statistical significance of the results.

In the Paradise Dam trial the rate of formation of ions and their dispersion from the
Atlant device was also measured to try to establish a physical link between ion
generation and precipitation. The observations allowed the calculation of ion
densities in the immediate vicinity of the generator.

However, the process of ion formation, recombination, attachment to aerosols
and subsequent dispersion was acknowledged to be complex and difficult to measure.
Demonstrating a causal physical link between the operation of the Atlant system
and increased rainfall would require a major research effort.
Demonstrating a statistically significant relationship between Atlant operation and rainfall
was seen as a prerequisite to such an undertaking.

ART is committed to developing experimental designs and statistical methods for
measuring the effects of ion generation and other enhancement technologies, more
generally, on rainfall. This effort has focused on the use of spatial statistics to exploit
correlations in observed rainfall between individual gauges on a daily or even higher
frequency basis and the application of dynamic control areas defined on the basis of
prevailing meteorological conditions.

These spatial statistical techniques were applied retrospectively to the Bundaberg trial
data. It was found that there was a statistically significant elevation in rainfall
downwind of the Atlant site. This is consistent with the hypothesis that ions
generated by the Atlant system were carried to the cloud layer through wind and
turbulence.

The experimental design of the trials and statistical methodology has been the subject
of ongoing exploration and refinement. The decision to conduct the third trial in the
Mount Lofty ranges was a reflection of two factors, First, the trials had been
conducted in Queensland under subtropical and tropical climates, and the Mount
Lofty range trial area allowed the technology to be evaluated under mid-latitude
weather systems, including regular frontal activity. Second, the results from the
Bundaberg trial indicated that a successful trial could potentially generate a substantial volume of rainfall.

The South Australian trial region had experienced an extended period of well below average rainfall,
creating water shortages for commercial and urban users as well as the environment.
A successful trial had the potential to significantly augment supplies in the region.
The results from the first South Australian trial are detailed in the balance of this report.

The Atlant Site in South Australia.

Land and water mass within a 100km radius about the trial site.

Melbourne hit by rain, wind and hail in dramatic weather change, with another cool spell forecast for next week

Urandangi, north-west Queensland, evacuated ahead of biggest flooding since 2009

How an extreme flash flood wiped out Eugowra in NSW

Residents of Wyanbene struggling to access supplies, medicine due to regularly high floodwaters

Just months before Lisa’s home was destroyed by floods, her insurer refused to renew her policy 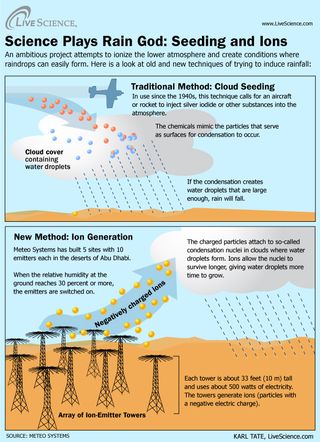 Just for the record – Mick Raven

OMG The Sky IS Falling…Literally

Climate and floods Flannery is no expert, but neither are the experts

Posted on January 5, 2023, in ConspiracyOz Posts. Bookmark the permalink. Leave a comment.