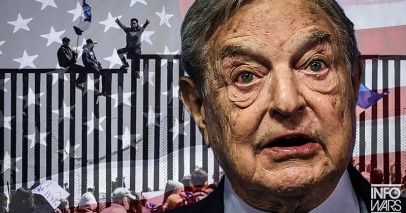 The 32 pages of records show the Obama administration sent U.S. taxpayer money to Soros-backed groups in Albania to fund his subversive political activity, and that he assisted the State Department in deciding how to allocate taxpayer funds for certain grants.

The documents obtained through Judicial Watch’s FOIA lawsuit reveal the mechanism by which Soros-backed groups are able to organize efforts like the migrant caravans through groups like Pueblos Sin Fronteras, and the leftist coalition known as CARA.

“IMI’s [Open Society International Migration Initiative] access to the Sutherland team’s discussions has allowed us to keep civil society partners up-to-date on the latest developments, in order to inform advocacy and campaigning strategies prior to the events and to plan follow up actions,” the leaked document states.

The Soros document goes on to claim the cozy relationship with Sutherland has “set the stage for institutional reforms to global migration governance, and to break new ground on protections for migrants outside the asylum system,” meaning unfettered protection for migrants regardless of asylum criteria.

Together, these documents paint a picture of how Soros-backed NGOs and the UN are quarterbacking the migrant caravans funneling their way to the U.S. southern border, such as logistics-planning, food and water distribution, and media outreach.

This is why the globalists pulled the “Lou Dobbs Tonight” episode featuring Judicial Watch Director Chris Farrell, resulting in his permanent ban from Fox News and an apology from the network, absurdly claiming his rhetoric was antisemitic.

Farrell clearly outlined how Soros, evidenced by the above documents, allocates taxpayer funds from the State Department to his NGOs to push his far-left political agenda of creating a borderless utopia.

And that’s why he had to be silenced.

Posted on November 17, 2018, in ConspiracyOz Posts. Bookmark the permalink. Leave a comment.