by Americans for Innovation

SES SERCO “WET-WARE” SOFT KILL PLAN IS HAPPENING, BUT CAN BE STOPPED: DEFUND THEM, NOW!

(May 16, 2018)—On Jan. 02, 2018, a British Crown-controlled company named Serco Inc. was awarded a $610 million contract to manage FEMA Region 9 that covers Arizona, California, Nevada, Hawaii and the Pacific Islands. On Jul. 16, 2013, Obama awarded Serco a $1.2 billion contract to run the Obamacare website. Serco also manages the air traffic control towers in 63 U.S. airports, and has been paid more than $95 million to run the U.S. Patent and Trademark examination processes. See substantiating evidence below.

Why have we not heard of them? More to the point, why are we outsourcing critical American infrastructure, ingenuity and private medical information on every U.S. citizen to sworn agents of the British Crown?!

Serco’s most recent 2016 annual report published at Companies House in London provides critical clues about Serco’s unstated mission. In looking at Serco’s bizarre collection of subsidiaries, one is left with the evident conclusion that something nefarious is afoot. 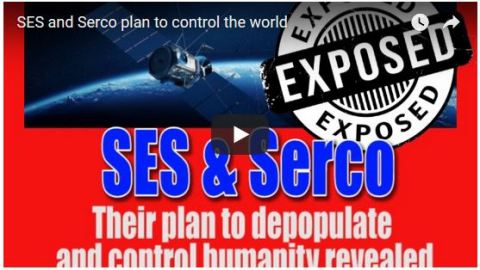 On the surface, Serco is the weirdest assortment of companies on the planet

This Serco list of 73 subsidiaries revealed a shocking correlation among; (1) Serco’s business interests, (2) the activities of the Senior Executive Service (SES), and (3) the monstrous “Internet of Things” patents filed by Richard C. Walker, Hewlett-Packard and Agilent Technologies.

Eureka! Serco is tasked by the SES to manage the global execution of The “wet-ware” internet of things 5G satellite system for the Deep State

In the Walker patents, human beings or people are labeled as mere “wet-ware.” “Wet works” is a spy euphemism for assassination. Tellingly, Obama’s chief of staff, John D. Podesta, used the term just days before Justice Antonin Scalia was found dead in Texas, after which Obama immediately began promoting SES gloabalist Merrick B. Garland to replace him at the Supreme Court.

The association of the spy tradecraft “wet” words is apparent. Walker does not even hide it, he states that his patents are intended to track and control everything and ever body in this world, even ino low orbit—The Internet of Things. It is apparent that neither Walker nor his SES handlers ever expected deplorables to read his work. We have.Bookmark: #ted-turner-depopulation-goal | https://tinyurl.com/yd6zehjc

The widely-promoted 5G wireless plan is very clearly designed to make Walker’s one-world government population control plan a reality. Elon Musk (SpaceX), Eric Schmidt (Google), OneWeb (Qualcomm, Amazon) have been working with the SES-controlled The Aerospace Corporation to put up a hundred satellites so far, with a planned 24,000 more in the 5G plan. 5G will enable the SES to eliminate people without harming plants and animals, so they think.

They’re wrong. Why do you think honey bee populations are collapsing? ANSWER: Electromagnetic smog. Something like eight billion different radio frequencies surround us at all times. Can you mitigate these harmful frequencies? Yes, but we digress.

Obama’s Net Neutrality pitchman FCC Chairman Tom Wheeler (2013-2017) told the National Press Club on Jun. 20, 2016 that the health effects of 5G will not be tested before roll out. Here are culture commentator David Icke’s observations on Wheeler’s 5G industry bullying.

Globalist eugenicist Ted Turner, CNN founder (now known as the C.I.A. News Network) was caught here on video calling for a 75% reduction in the world population (“I think 2 billion is about right right.“). According to the U.N. Agenda 21, the goal is to reduce populations in high tech rare earth mineral rich poor countries (many in Africa), and to reduce populations in the consuming nations to make more room for the genetically superior elites who will remain. (And we thought the world turned its back on such evil thinking after Adolf Hitler and WWII. No, we secretly imported those depraved Nazi eugenicists into the C.I.A. and IBM during operation Paperclip.)

It is no longer a secret that New World Order globalists are proponents of eugenics and world depopulation, as was Woodrow Wilson, Adolf Hitler and as are Hillary Clinton, Barack Obama and Planned Parenthood. Indeed, government data aggregator Deagel.com, Agenda 21 and Ted Turner’s Georgia Guidestones predict higher than 70% population reduction by 2025-30. It appears that Serco is being paid billions of dollars a year to get ready and make it happen.

As you can see, in the video below, eugenics has been promoted by self-styled “elites” for a very long time.

Posted on June 7, 2018, in ConspiracyOz Posts. Bookmark the permalink. 1 Comment.