The coming Chinese crackdown on Hollywood 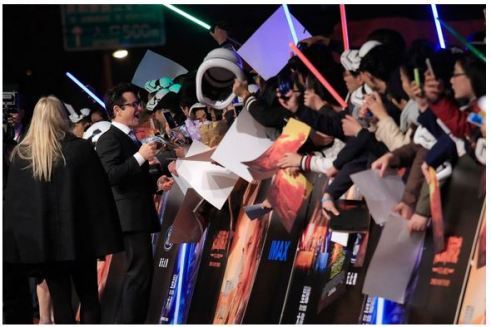 Isaac Stone Fish is an international affairs journalist and senior fellow at the Asia Society’s Center on U.S.-China Relations.

China has become a hugely lucrative market for American films — causing pushback from some in the ruling Chinese Communist Party, who fear the spread of ideas they find distasteful. And so Hollywood producers work with Beijing to ensure that their scripts won’t, in Chinese parlance, “hurt the feelings of the Chinese people.”

“World War Z” deleted a line in which characters debate whether the zombie pandemic sweeping the world originated in China.

The arcade game film “Pixels” lost a scene where aliens blast a hole in the Great Wall. And in the most absurd recent example, Marvel’s “Doctor Strange” featured the white British actress Tilda Swinton playing a Tibetan character, because the film’s screenwriter C. Robert Cargill felt that would be less controversial than casting someone who looked ethnically Chinese or Tibetan.

That grip is likely to grow tighter, and the censorship more absurd. In a little noticed shift at the recently concluded National People’s Congress — where the 64-year-old Chinese leader Xi Jinping successfully abolished term limits for the presidency of China, paving the way for him to potentially stay in office for life — the Party’s Propaganda Department got an important new responsibility.

Before March, it was a government body, the State Administration of Press, Publication, Radio, Film and Television (SAPPRFT), that managed China’s relationship with Hollywood. But as the party moves to reassert its control over China and the government, Xi assigned that control to the Propaganda Department, a much more powerful and conservative body.

To understand what the U.S. film industry will soon be facing, it’s important to comprehend the stark difference between the government and the party in Chinese political life. In the United States, the Democratic and Republican parties share control of the government, while existing independently from it.

In China, however, the government is subservient to the Communist Party, which wields far greater power. In Chinese provinces, the governor is the second most powerful official — behind the local party secretary, who oversees him. (And yes, both roles are almost exclusively filled by men.)

While government officials are often party members — and SAPPRFT serves the party’s interests — there are differences between government and party institutions. Party institutions tend to be more obsessed with how China is portrayed, and more sensitive to slights against the country. And because they are more powerful, their decisions tend to matter more, and they have more sway.

Moreover, the reorganization, according to a description of the plan released on China’s official news wire Xinhua, reflects the “especially important role of cinema in propagating ideas and in cultural entertainment.” Because the party will likely give more resources to domestic film producers, foreign and co-produced films might now face stiffer competition in China — meaning that Hollywood producers will have to tread more lightly around sensitive areas, so as not to put themselves at a disadvantage.

The quota system dictates how foreign films are screened in China. A 2012 bilateral deal caps the number of foreign films China imports at several dozen. Because China’s ticket sales hit $8.59 billion in 2017 — rapidly closing the gap with the United States, which saw a $11.12 billion box-office take in the same period — competition for those slots is growing fiercer. And officials from the Propaganda Department will likely have higher censorship standards than their government counterparts.

With so much shifting in the U.S.-China trade relationship, it’s difficult to predict what will happen. Currently, the United States and China are negotiating over the quota system. Could the potential for a trade war cause Beijing to retaliate against Hollywood, forcing the studios to grow more supplicant? It’s possible. Yet as film expert Stan Rosen points out, “They know that if they go after Hollywood, no one will give a damn, because no one there likes” President Trump.

Could the shifting political climate toward China cause Hollywood to produce films more critical of the country? Possible, but unlikely. Although many in Washington and the Pentagon seem to have concluded that China is a threat, Americans as a whole have not:

And there are far more moviegoers in China than in Washington. In 2016, screenwriter Cargill explained why “Doctor Strange” censored itself: “If you acknowledge that Tibet is a place,” he said, “you risk alienating one billion people.”

Posted on May 1, 2018, in ConspiracyOz Posts. Bookmark the permalink. 1 Comment.