Another Interesting Take on The Sydney Siege – ConspiracyOz

If you search Google images for Man Haron Monis, there appear to be different people playing the part. The faces are not all good matches for each other which in my opinion needs an explanation. Remember that with Osama we got many variants, one real, the rest all actors. In looking over the photos of Man Haron Monis, it appears that the same may be true of him as well, and if he is a fiction played by several people it needs to be made known.

Here are some different photos of the “same guy”. Something is amiss, for example, why is his beard totally gray in the top photo and black in all the others? Why is the face so different? We saw this type of difference with the fake Osamas. All from Sydney are reasonably recent photos, how could the beard be gray in the top one? Heck, I think I will post that comparison photo again, because I think with a google image search I answered why the top photo looks like one of the photos of this guy – there may be several actors here.

Take a look at these photos, and then the final comparison. Are we dealing with actors and a fiction as bad as Osama getting buried at sea? It would not be the first time.

Here is the original comparison. Something looks fishy to me.

Someone put up signs during the event that said DECEPTION, FRAUDULENT! Holy cow!

Quotes from Australia regarding Sydney

These are quotes from readers of this web site that show what aware Australians noticed about the “ISIS” event in Sydney:

Media coverage so excessive it made unaware people question what was going on: “I live in Australia and the media coverage was off the charts. Talk about psychic driving a message. All day and all night on every channel, images shown of a cafe with reflections in the glass of a Muslim flag and people with their arms up. Even my relatives who are not awake to the evils of the NWO were questioning the rationality of the constant coverage. All of the politicians stood up and did their speeches. The next morning the news casters were wearing black and white and were speaking in a caring tone as if they were at a funeral. I wonder what the psychological impact will be on the city of Sydney’s massive coffee culture?”

“Maybe the standard war propaganda psychology for the 7.125 billion earthlings not reading this forum should work by generating hatred by seeing an Islamic sign above the word Christmas.”

– – “I’m in Melbourne and I have no doubt this operation was controlled from ASIS/Australian Secret Intelligence Service through and through. This nonsense was definitely no where near as good as port Arthur where our country was disarmed through a national buy back program and the sheeple gave up their guns. 410,000 guns were bought back and destroyed and an intellectually challenged patsy who was subjected to MK ultra brainwashing took the fall. As for this one I hope next time the donkey kicking ISIS scumbags set up a psyop maybe they will spend more than a dollar fifty on it and get it right next time.”

Got more Sydney discoveries? Put them on the Forum

It has to be a hoax, but they did have their cover story. First for the hoax part –

I received lots of input from readers on this one, and one glaring problem with the entire scene was the fact that the police threw stun grenades (a large number of them) after they entered the chocolate shop. That makes no sense at all, stun grenades are always thrown before entering. Why were no cops knocked out by their own grenades? To the best of my knowledge there were no cops knocked out by this. That says hoax, there are two types of stun grenades, one makes a loud pop and is for practice, the other is an actual weapon. Both would look good for the cameras. What gives with that?

Another big glaring issue is how the cameras got better shooting angles than the police. That was very odd.

They had the cover story – that this guy was a sexual predator with tons of stuff on his record and he was out on probation/parole, WHATEVER. BIG PROBLEM – this does not fit the image of “radical Muslim Cleric” that they tried to present, such types have squeaky clean behavior no matter what lies the ziopress spins and that is a gaping hole in this entire charade. I guess when liars lie they go for the intellectual bottom feeders who think things like “Islamic cleric” and sexual predator go hand and hand, but it is a cold hard fact that they do not. That is a massive gaping wound in this story.

Probable reality? If this was real, it was a brainless patsy with a long record that was set up to do this. In prison or wherever he was prior, it would be a prime time to brainwash the living * out of him with drugs, flashing lights, the whole 9 yards and then release him with him thinking he was a cleric on a mission. If anything fits, THAT is what fits. If anything happened at all, that is where the chips lay as far as I see it, HOW ELSE could “Isis” show up and then need a flag? None of it makes sense, it all matches the profile of a mentally handicapped man on a brain wash mission.

Isis(tm) nabs a chocolate shop in Sydney, right across from Channel 7!

There will be continuous updates and discussion on the Forum

This report is updating frequently, scroll down the page for the latest.

As of 7 PM Central time on the 14th (which is the 15th in Australia) an “Islamic terrorist” has taken over a Lindt chocolate shop in Sydney Australia and held 50 people hostage. But there are serious problems with this story.

The first problem? A sign the hostages reportedly were forced to hold up against the windows which read “We sacrifice ourselves for you, O Mohamed” was shown via a blurry photograph and had incomplete text. This would be expected of a hack doing this, no Muslim would get the text wrong.

The second serious problem is that this is purportedly an ISIS action. But it appears to be a lone gunman doing it all, which reeks to high heaven of a pre programmed CIA drone doing this according to what ever script was washed into his head especially with the sign being apparently half baked in appearance.

The third serious problem? As of 10 PM CST, absolutely nothing about this has been released on anything other than twitter. Nada on Drudge, CNN or anywhere else. Only Australian papers have anything up and all they are doing is following tweets because tweets are all there is at this point. So they could be doing toe dips with a load of bunk and seeing where it goes. HOWEVER, Lindt Chocolate company has shut all other stores, that is for certain so even if it is all tweets at this point, something of substance has happened as a result.

This story may well be so fresh that no one has caught on yet in the MSM? Let’s see what posts on the 15th in the U.S., certainly if this is “their” next pet project they will do all they can to make hay with it. 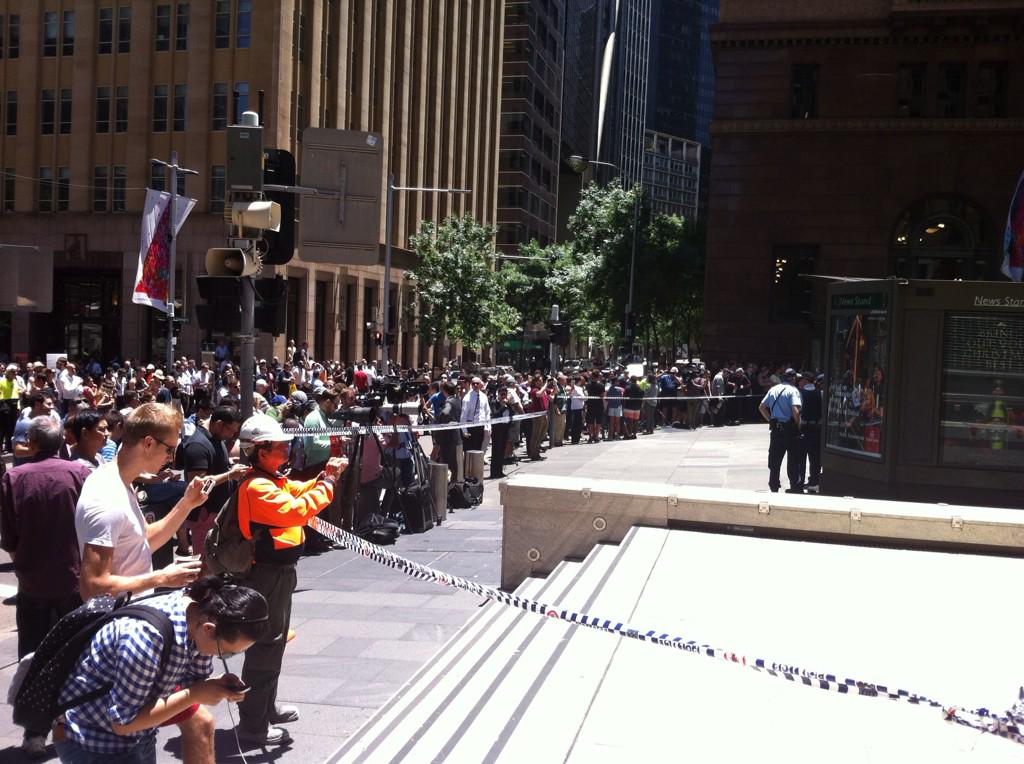 The location and timing appears to be too perfect to be real. Take a look at this photo – The location was obviously selected for huge media coverage with a perfect view of the hostage taking scene. The fact this was launched early morning on Monday gives them a full day of media coverage (just like 911) and a whole week to make hay. The ISIS sign was placed perfectly between “Lindt” and Merry Christmas” on the windows, perhaps a back stab because the Swiss asked for their gold back?

Update: Drudge still does not have anything up about this along with CNN and all others, why the delay in the American press? 5 hours into this now . . . . .

depending upon which report, AND, you do not get perfectly clear shots of police pointing guns directly at news cameras unless it is all set up to be that way for propaganda psy op purposes, this one is tough to believe. What on earth could that cop possibly be pointing his gun at other than a news camera to make a big show? What is between the cameraman and that cop that needs a gun pointed at it? So called “hostage” or escapee looking right at the news camera just like the cop is, WHY? Because it makes a great photo!

Because they know that the ISIS ruse is a risky fraud to uphold, and they are afraid of putting it up in front of Americans en masse before they know if it is going to actually fly in Australia. That is the only possible answer for this blackout in the American press. They have a few more hours for the toe dip in the truther piranha tank to prove itself out in Australia while people sleep in America before deciding whether or not to dip America in that tank as well. Obviously if it flops before evening in Australia, they will retire it where it sits.

UPDATE: They are testing the waters with various stories. For example, the unintelligible message about all of this being done for Mohammed has been replaced with “it was the Shadaha” which is too big of a leap for any real story. They are simply testing new things until they find a load of crap most intellectual carp will suck on and enjoy.

HA! Here’s a good one! Among their demands was that they be brought an Isis flag! If that is not a laugh I don’t know what is, YOU MEAN ISIS SHOWED UP WITHOUT A FLAG? NOT EVEN A LASER PRINTED ONE? Come on now, 11X17 laser print available at Kinkos would work JUST FINE! No flag??!!?? what a joke! That demand was apparently made at the request of a few intellectual carp who will believe said demand “proves” it has to be ISIS!

Update: Now the guy is a Muslim cleric! Here is a nice little tidbit regarding that subject – anyone can call themselves a “cleric” in Islam. However, ALL the real ones have at least a master’s degree in Islamic studies and if they do not, they are just nutters claiming to be clerics! What does this guy have? A mop? If you forgot to bring your flag to an ISIS event you would have to be restricted to pushing a mop in real life, “cleric” my *ss!