There is speculation that that may have lead to his actions yesterday. 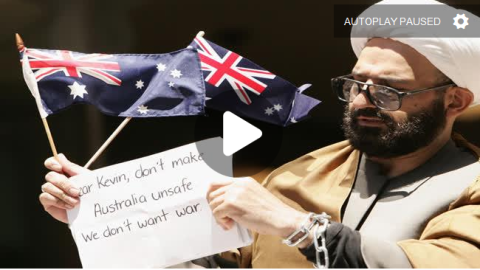 THE man who held several people hostage in a Sydney cafe for over 17 hours is a self-styled ‘sheik’ with a history of run-ins with law enforcement and a long-standing grudge with the Australian government.

Man Haron Monis, 50, died when police stormed the Lindt cafe in Sydney’s Martin Place in a hail of gunfire shortly after 2am this morning.

Monis, also known as Sheikh Haron and Mohammad Hassan Manteghi, published an anti-Australian rant on his on his personal website the day before the siege, railing against Australian

‘terrorism’ and vowing to fight the “oppression and terrorism of (the) USA and its allies including (the) UK and Australia”.

The gunman has previously been convicted of sending hate-filled letters to the families of Australian soldiers who died in Iraq and Afghanistan.

Monis instigated the siege while on bail on a charge of accessory to murder, relating to the death of his ex-wife, who was allegedly stabbed and set alight in a stairwell of her Sydney apartment

Monis’s current partner has been charged with murder over the incident.

On granting bail, Magistrate William Pierce saying the Crown’s noted the case against Monis was weak.

In March this year he was charged with more than 50 sexual offences including the 2002 sexual assault of a young woman which was allegedly carried out under the guise of ‘spiritual healing’.

His victim, 27 at the time, allegedly saw an advertisement for ‘spiritual consultation’ in a local newspaper and contacted him.

He told her he was an expert in astrology, numerology, meditation and black magic and advised her to visit his clinic.

As far back as 2008, Australia’s Muslim leaders distanced themselves from Monis.

Australia’s senior Shia leader at the time, Kamal Mousselmani, called on federal authorities to investigate the fake sheik, saying he did not speak for Australia’s Muslim community.

Mousselmani told The Australian there were no ayatollahs — supreme Shia scholars — in Australia and none of his fellow spiritual leaders knew who Ayatollah Boroujerdi or Sheik Haron was.

“We don’t know him and we have got nothing to do with him,” Sheik Mousselmani said. “The federal police should investigate who he is. It should be their responsibility,” he said.

Speaking on Sky News this morning, Monis’s former lawyer Manny Conditsis said his client often said he ‘loved Australia’, but fought furiously against our soldiers’ presence in Afghanistan in Iraq.

“He had an incredible passion for lobbying against the killing of innocent children — What he would call unjust wars”, Mr Conditsis said.

“Nothing in my observations of the man … would have led me (to believe) he was capable of anything like this.

“Everything I saw of him suggested he was very passive.”

Mr Conditsis said he saw Monis ridiculed on the street but he would “literally turn the other cheek”.

“He certainly had ideological passion but nothing to indicate he was capable of anything like this.”

Haron Monis was charged for sending hate letters to families of soldiers killed in Afghanistan. Appearing for sentencing at the Downing Centre. Source: News Limited

died in Iraq and Afghanistan.

In the letters Monis called one Australian Digger ‘the son to a dirty pig, and to a dirty animal’, and urged the Diggers’ families to call on the government to pull troops out of Afghanistan.

In court Monis claimed he was a ‘peace activist’ and that his rights to free speech were being trampled.

During the trial Monis chained himself to the steps of Sydney’s Downing Centre Court to ‘convery his message of peace.’

There is speculation that that may have lead to his actions yesterday.

Shortly before 9.45am yesterday morning Monis entered the Lindt cafe in the heart of Sydney, armed with a sawn-off shotgun and taking up to 20 hostages, several of whom managed to escape yesterday.

After a prolonged period of silence overnight, several hostages desperately fled the cafe before police stormed in shortly later.

Live images of the ensuing firefight were beamed around the world as one loud blast, possibly from Monis’s shotgun, was heard. It was followed by dozens of shots from automatic weapons and

Several ambulances rushed an unknown number of people to hospital as medical teams performed CPR on people in Martin Place. One police officer was seen with blood rushing from his head.

It’s believed three people, including Monis, have died as a result of the firefight.

Tony Abbott: Martin Place siege gunman was known to ASIO but not on terror watch list

Posted on December 16, 2014, in ConspiracyOz Posts. Bookmark the permalink. Leave a comment.