Is Australia going to become the New Saudi Arabia? Lithium Mining seems to point in this direction – Mick Raven

The Sonora lithium project, located in Sonora, Mexico, is the biggest lithium deposit being developed by Sonora Lithium (SLL), a joint venture (JV) of Bacanora Minerals (77.5%) and Ganfeng Lithium (22.5%).

The mine is estimated to hold proven and probable reserves of 243.8Mt, containing 4.5Mt of lithium carbonate-equivalent (LCE). The bankable feasibility study for the La Ventana concession, which will account for 88% of the mined ore from the project, estimates an initial mine life of 19 years.

The Thacker Pass lithium project is located in Humboldt County, Nevada, US. It is 100% owned and operated by Lithium Americas.

The mine is estimated to contain proven and probable reserves of 179.4Mt containing 3.1Mt of lithium carbonate equivalent (LCE). The mine is expected to have a life cycle of 46 years.

The pre-feasibility study (PFS) for the project was completed in August 2018, which proposed the two-phase mine development using open-pit methods. Phase one is expected to be commissioned in 2022 with a production capacity of 30,000tpa of battery-grade Li2CO3 while phase two will increase the capacity to 60,000tpa with a commissioning date of 2026.

The Wodgina lithium project is located 100km south-east of Port Hedland in Western Australia. The mine was earlier 100% owned by Mineral Resources. In August 2019, the company entered an agreement with Albemarle Corporation to form a 60:40 joint venture to develop the mine.

The open-pit mine is estimated to contain probable reserves of 151.94Mt grading 1.17% Li2O. Construction of the spodumene concentrate plant is currently ongoing with the first train being commissioned in June 2019 while the remaining three are expected to be commissioned in 2020. First ore from the mine is expected in the first quarter of 2020.

The Pilgangoora lithium-tantalum project is situated in the Pilbara region of Western Australia. The mine is 100% owned and operated by Pilbara Minerals.

The proven and probable reserves of the mine are estimated to be 108.2Mt grading 1.25% Li2O and 120 parts per million (ppm) Ta2O5 and 1.17% Fe2O3. The definitive feasibility study (Dfs) of the project was completed in September 2016 and commercial production was achieved in April 2019.

The mine is estimated to contain proven and probable reserves of 94.5Mt grading 1.5% Li2O. The PFS for the project was completed in December 2018 while the DFS is currently underway.

The mine is expected to produce 411,233t of spodumene concentrate a year over its 47-year mine life, upon commissioning in 2020.

The mine is estimated to contain proven and probable reserves of 86.4Mt grading 2.35% Li2O. It is installed with two processing plants, which produce technical and chemical-grade lithium concentrates.

The Whabouchi lithium project is located in the James Bay area in central Quebec, Canada. It is 100% owned and operated by Nemaska Lithium, a Canadian mining company.

The mine is estimated to contain proven and probable reserves of 36.6Mt grading 1.3% Li2O. It is planned to be developed using open-pit and underground mining methods over its 33- year mine life. Underground mining will be undertaken in year 26 upon depletion of the open-pit reserves.

Altura Mining’s 100%-owned Pilgangoora lithium mine is located in the Pilbara region of Western Australia. The mine is estimated to contain 34.2Mt of proven and probable reserves grading 1.04% Li2O. The mine is expected to have a life of 13 years.

The open-pit operation is being developed in two stages. The first stage was commissioned in early-2019 and is expected to produce 220,000tpa of lithium spodumene concentrate.

Altura has completed a DFS for stage two expansion of the mine, which will increase the annual production capacity to 440,000tpa. Stage two is expected to be undertaken upon securing long-term offtake agreements and necessary funding, following which first production is expected within 18 months.

The Goulamina lithium project is 100% owned and operated by Mali Lithium, a mining company based in Australia. It is located in the Bougouni region of southern Mali and planned to be developed using open-cut methods.

The mine is estimated to contain probable reserves of 31.2Mt grading 1.56% Li2O and indicated and inferred resources of 103Mt grading 1.34% Li2O. The estimated operating life of the mine is 16 years while the production capacity is 362,000tpa of concentrate.

Mali Lithium has completed the pre-feasibility study (PFS) for the project and is currently carrying out the DFS. The final investment decision on the project is expected to be taken in the second half of 2020.

The Arcadia lithium project is open-pit mine located 38km from Harare, Zimbabwe. It is owned and operated by Prospect Resources, an Australian mining company.

The DFS for the project was completed in November 2018. The mine is currently under construction and expected to be commissioned in the second half of 2020.

Mr McGoo (Mark McGowan) is now in a race to turn W.A. fully electric with the help of Globalists from China. – Mick Raven 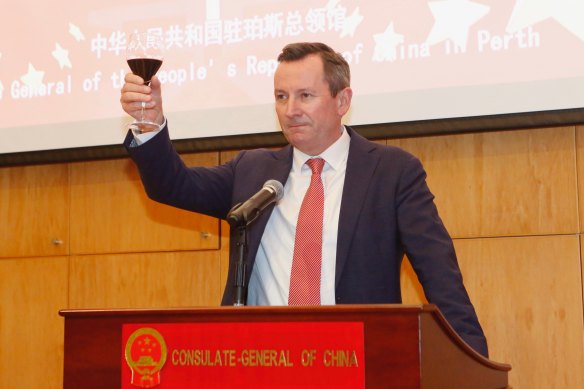 Posted on January 1, 2023, in ConspiracyOz Posts. Bookmark the permalink. Leave a comment.