← Died Suddenly….Say No More – ConspiracyOz
Paralympian Christine Gauthier claims Canada offered to euthanise her when she asked for a stairlift →

Baby W – Our Baby Has Just Been Medically Kidnapped

A video has emerged of the moment police intervened to allow Baby W to be taken away for pre-operation checks.

Four police officers in stab-proof vests were in the hospital room last night, as the baby’s father labelled them and medical professionals “criminals”.

The video shows an officer explaining to the parents that the baby needs the procedure as soon as possible, as another walks towards the baby to take him. 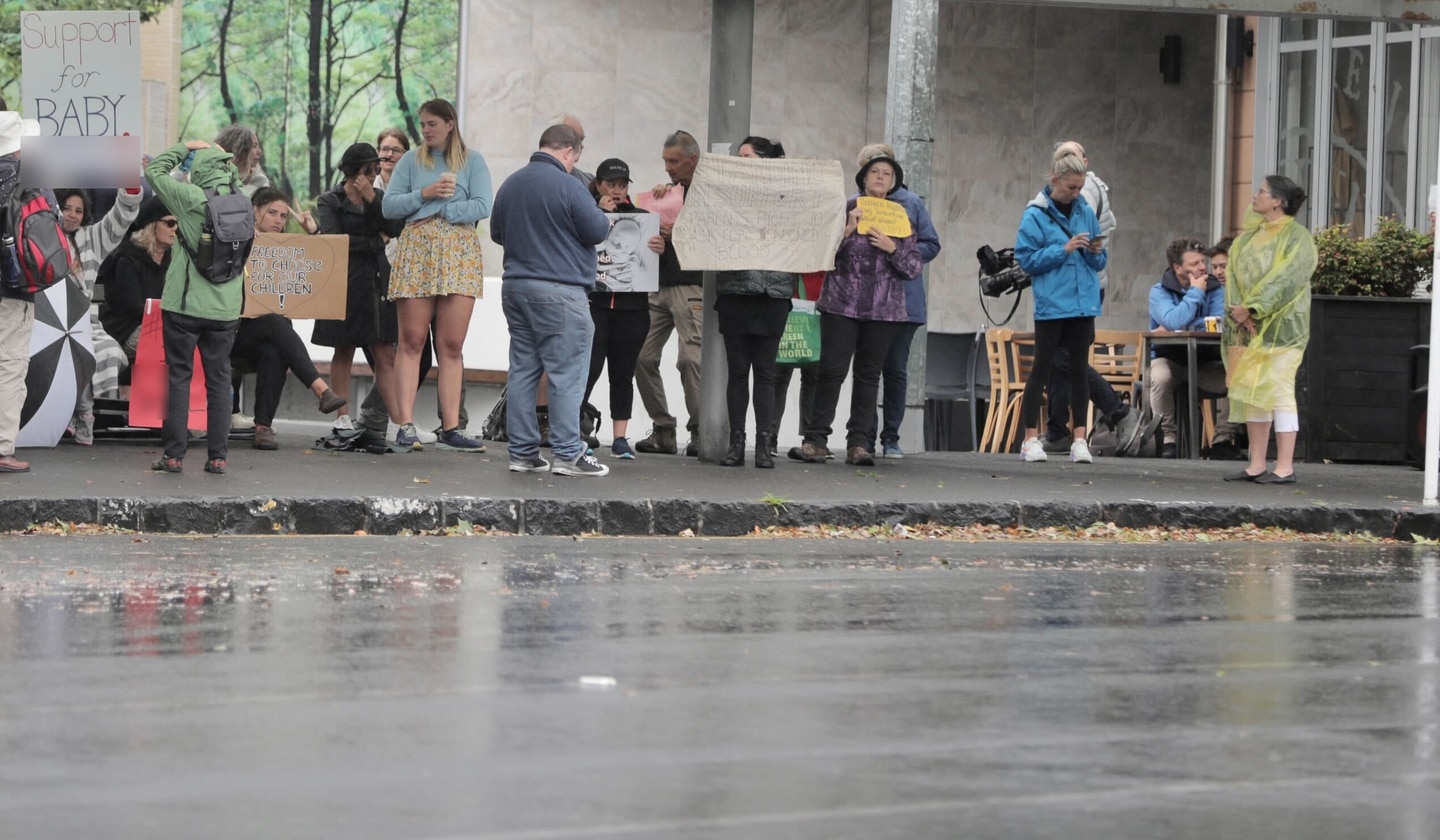 Protesters arrive for the vigil at Auckland City Hospital and the neighbouring Starship, with the baby’s heart surgery planned for today. Photo / Michael Craig

At this moment Baby W’s father can be heard saying “don’t do that boys”.

The mother crying says “please stop”, the dad then steps in and starts calling the officers “criminals”.

Officers in uniform continue to reason with the parents explaining that the pre-op tests need to happen before the surgery.

However, the father continues to argue.

“We have been talking to you like rational people and now you’ve just removed… you are criminals,” the father says.

Father shouts at the two officers, “move out… move out of the way”.

“You guys are acting like criminals,” he says pointing a finger at officers and hospital staff in the room.

“All of you are criminals,” the father yells at the officers and hospital staff present in the room. 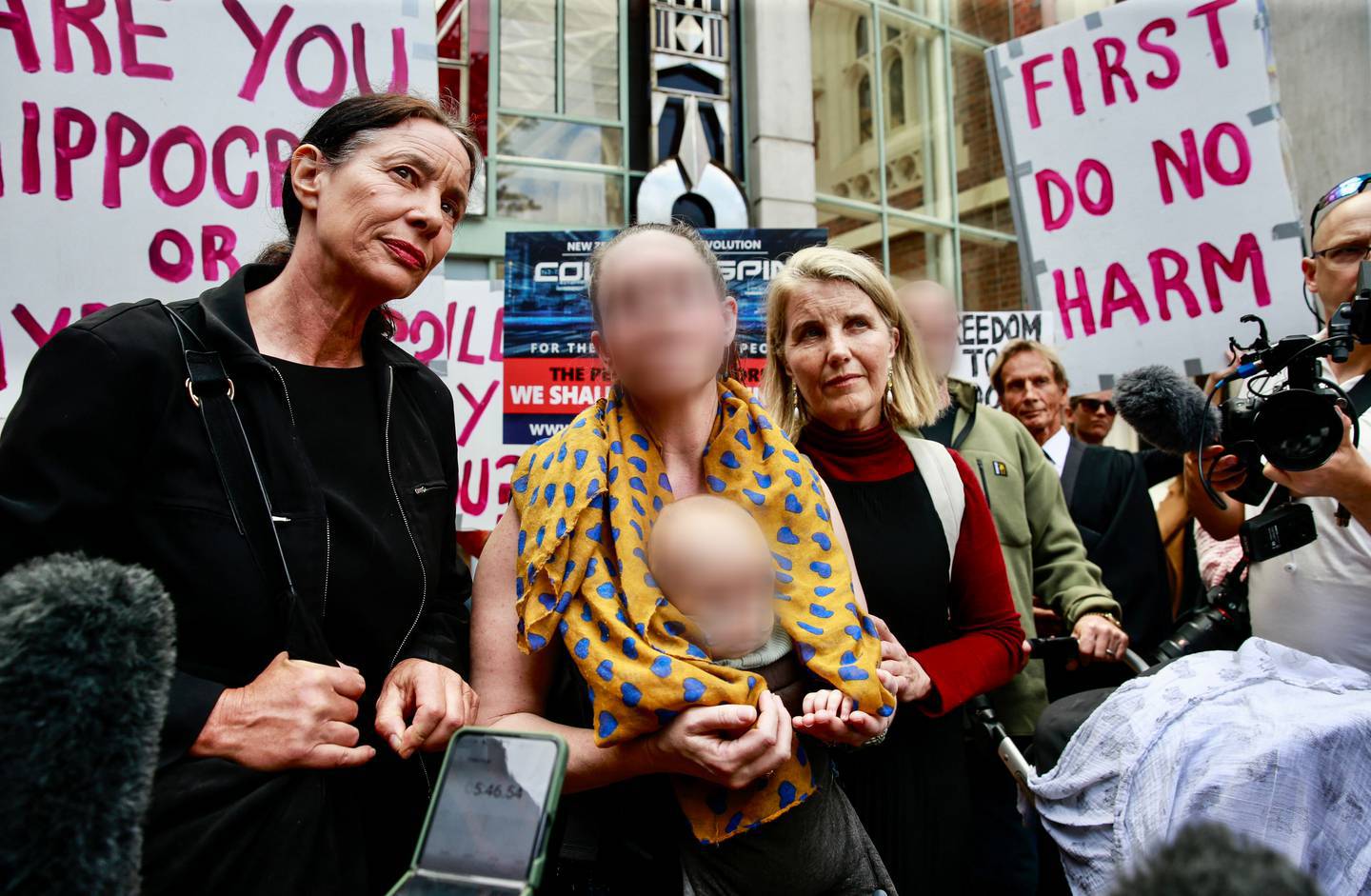 Father tells a hospital staff member, “you will not be a part of that surgery tomorrow, we did not authorise that”.

“No we are not listening to what you got to say,” he tells her.

The mother walks up to the staff member and asks “why did you do that?”

She tells her, “he is going to be okay”.

The father says, “no he is not going to be okay”.

The hospital staff member tells the mother they need to take him and do the medical procedures.

“You will be able to see him after the surgery,” she tells the weeping mother.

The father can be heard continuously shouting “you are criminals” at those present in the room.

“You will be recorded in time as criminals who come in here and take babies from their mothers,” he says.

“You guys understand you have just kidnapped a baby from his mother without the consent of their parents.”

The hospital staff member continues to tell the parents that they do need to do the operation as she walks out of the room. 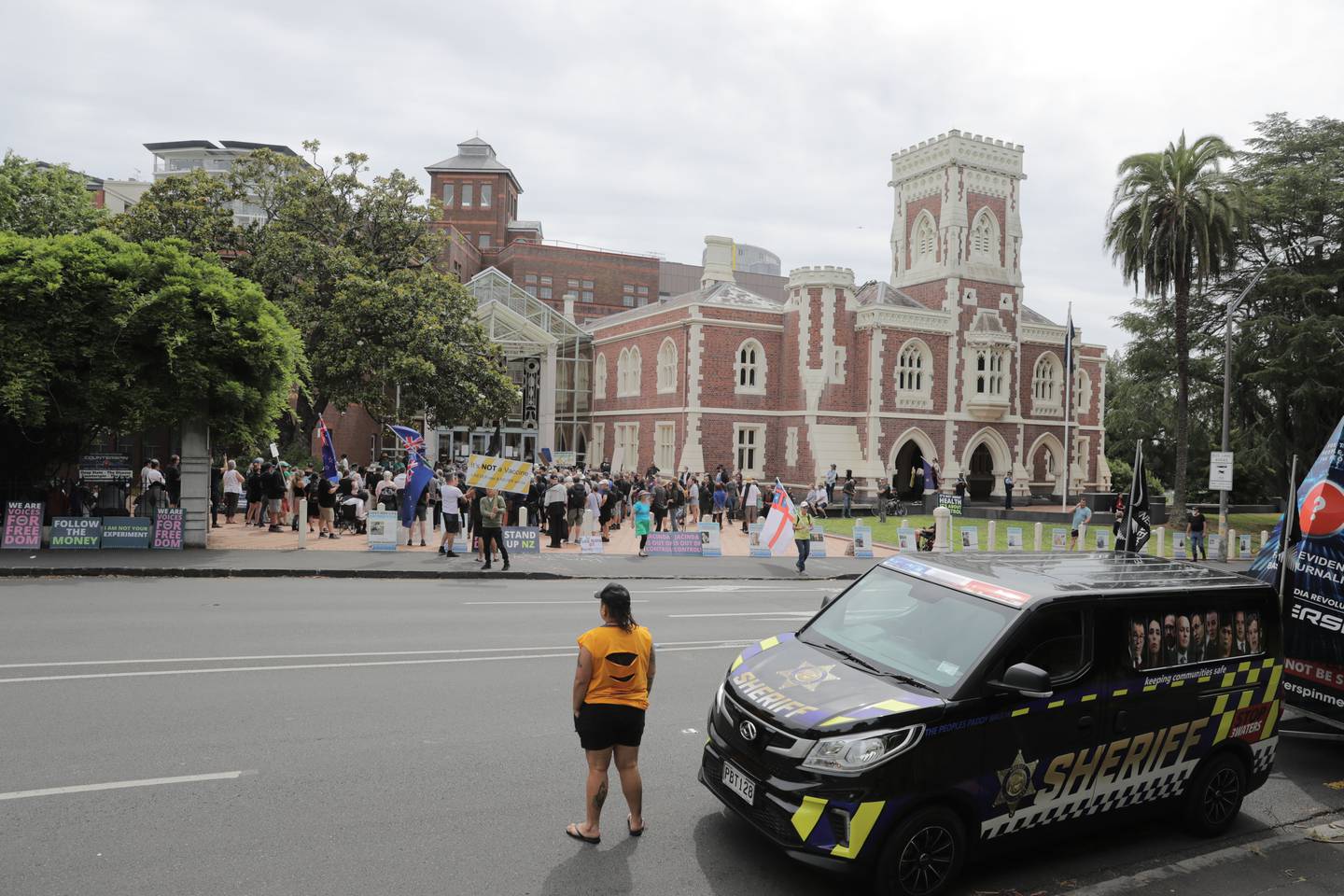 A crowd gathers outside the Auckland High Court as an urgent hearing takes place to decide the care of a baby whose parents refuse to use blood from vaccinated donors. Photo / Michael Craig

Police officers tell the parents, “we will give you some time”.

The mother tries to calm the father and tells the officers “you can’t do that I just need to be with him”.

The officer replies that they would talk to the hospital staff.

“The hospital staff has taken the baby for pre-operation checks it is in line with the order of the High Court and they are doing what they need to do tonight,” the officer explains to the mother.

The mother says she needs to be with him, the officer tells her that they are prepared to work with her for that.

“It is something we can negotiate with the hospital,” one of the officers tells the mother.

A support person of the family enters the room to calm the mother.

She says to one of the officers that “even a nurse is crying outside because you know this is so wrong”.

The officer says, “everyone involved in this room is upset about the situation, I don’t want to be here as much” before being interrupted by the father.

She can be heard saying “it’s f***ing ridiculous” as she walks out of the room.

The seven-minute-long video ends with police officers exiting the room.

And the family’s support person comes back into the room and tells the father she spoke to an officer telling him to chuck his badge in and come on outside, “and we will fundraise for you because he has a family to feed and I promise you we will get you enough money.”

But the officer told her he’s going to do better staying in that job.

She says “I hope it does mean something”.

The father says no it doesn’t. And the support person tells him “not right now, but let’s just hope he comes through”.

A police spokesperson said they were present at Starship Hospital on Thursday evening and overnight to assist hospital staff with a court order.

Protesters had started to arrive for a vigil at Auckland City Hospital and the neighbouring Starship, with the baby W’s heart surgery reportedly starting at 8am today.

A few dozen protesters holding signs and placards could be seen outside.

The NZ Freedom and Outdoors Party, of which the parents’ lawyer Sue Grey is co-leader, planned the vigil for 10am.

Prior to the vigil, it claimed on its social media page that police were last night guarding the baby’s room. 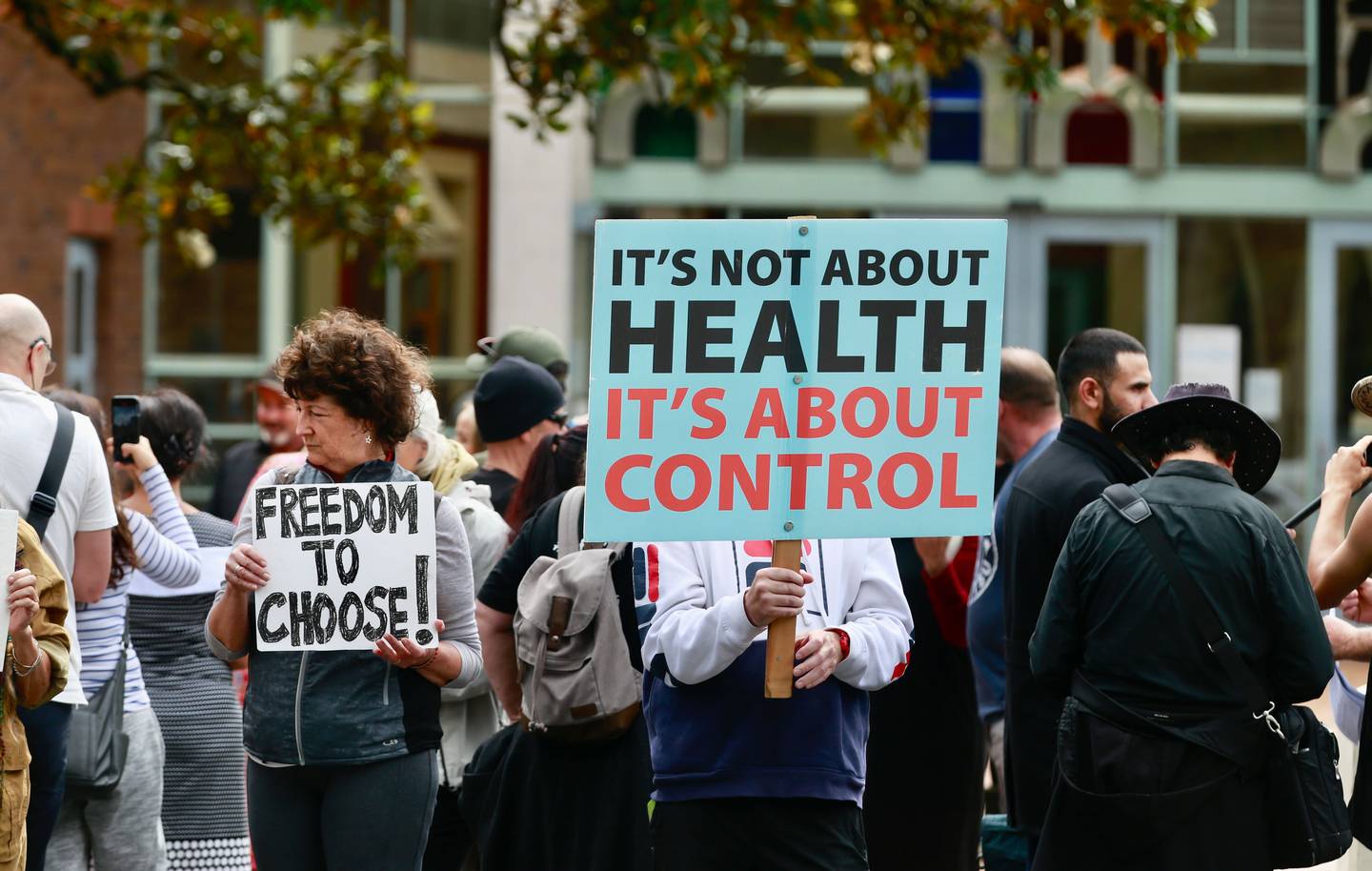 Crowd gather at Auckland High Court to support Waikato couple who refuse to use vaccinated blood to be used for their baby’s heart surgery. Photo / Alex Burton

The Herald understands hospital staff were given a safety briefing overnight, advising they should take care when approaching the building and its main entrances.

Yesterday a High Court judge ordered the Waikato couple to stop blocking doctors from carrying out the operation.

Justice Ian Gault made an emergency order last night after the baby’s parents allegedly told the doctors trying to prepare the baby for surgery this morning; “You touch our child and we will press criminal charges against you”.

The judge said Te Toka Tumai-Auckland Health sought an urgent court order clarifying “that the police are entitled to use reasonable force to remove Baby W from the parents and/or remove the parents in order to facilitate the steps necessary prior to Baby W’s surgery, including taking him to surgery when it occurs”.

A judgment said that yesterday afternoon, staff attempted to prepare the baby, whose identity is suppressed, for surgery, including taking blood tests, performing a chest X-ray and performing an anaesthetic assessment.

Te Toka Tumai-Auckland Health told the judge the parents had prevented this from occurring and threatened criminal charges, forcing the doctors to seek legal clarification.

Grey also sought advice from two United States experts who were seeking the opportunity to appear before the court or to discuss these issues with the Starship hospital surgeon, cardiologist and NZ Blood Service (NZBS).

They argued that the baby’s surgery could be delayed a week to “consider all options”. Grey referred to allowing time for the parents’ concerns, which she said were supported by new information and new expert evidence, to be addressed, and further submitted that there was “no urgency” for the surgery. He said it was previously common ground that Baby W needed surgery – the issue was in relation to consent to blood transfusion.

“Now that the parents evidently do not consent to the surgery or pre-operative checks, it is clearly necessary to make consequential ancillary orders to enable the surgery to proceed.

“Baby W urgently requires surgery and, as I concluded in my judgment, an order enabling the surgery to proceed using NZBS blood products without further delay is in Baby W’s best interests.

“I said in my judgment that it should not be necessary to make more explicit ancillary orders, but given the position being taken by the parents today, such ancillary orders are now required.”

He extended the authority of the doctors to enable the surgery and all pre-operative work to proceed and ordered the parents not to obstruct health staff.

On Wednesday Justice Gault ruled in favour of health authorities who had sought court guardianship of the baby boy after his parents refused a blood transfusion as part of life-saving heart surgery.

The parents wanted a court order to receive blood from exclusively unvaccinated donors.

Justice Gault delivered his ruling after a lengthy hearing on Tuesday, where Te Whatu Ora-Health New Zealand and Grey locked horns in the High Court at Auckland as anti-vax protesters gathered outside.

Justice Gault ordered the baby, who has automatic name suppression, to be placed under the guardianship of the court “from the date of the order until completion of his surgery and post-operative recovery to address obstruction to the outflow tract of his right ventricle and at latest until January 31, 2023″.

His ruling said the baby’s parents remain his legal guardians aside from the medical matters covered in the order.

The child has a heart valve disorder requiring urgent surgery and medical experts have said he would normally have received treatment a long time ago.

“His survival is actually dependent on the application being granted,” Paul White, lawyer for Te Whatu Ora, said earlier.

Justice Gault also declined an order sought by Grey for the NZ Blood Service to establish a tailored donor service for the boy to receive blood exclusively from unvaccinated donors.

A lawyer for the blood service, Adam Ross, KC, on Tuesday described the request for that order as exceptional and without precedent.

Ross said it would jeopardise the integrity of the donor service and open the door to ethically and clinically bankrupt requests regarding donor blood.

White said specialists believed the child’s heart was suffering damage because of the delay in surgery due to the build-up of blood resulting from pulmonary valve stenosis.

The parents and the baby, who was born two months premature, were in the packed public gallery for a short time on Tuesday morning – against medical advice.

In his conclusion of the 23-page judgment, Justice Gault said he accepted the parents of the baby had genuine concerns about the risk of using blood from vaccinated donors.

“However, the issue here is what is in [the baby’s] best interests.”

The parents’ alternative proposal was not viable, the judge said. “I cannot conclude it is a safe alternative that is in [the baby’s] best interests.

“For these reasons, and given that [the baby] needs urgent surgery, an order enabling the surgery to proceed using [NZ Blood Service] blood products without further delay is in [the baby’s] best interests.”

The ruling drew a furious reaction from the anti-vaccine movement.

Posted on December 10, 2022, in ConspiracyOz Posts. Bookmark the permalink. 1 Comment.

← Died Suddenly….Say No More – ConspiracyOz
Paralympian Christine Gauthier claims Canada offered to euthanise her when she asked for a stairlift →