Georgia Guidestones blown up and levelled

GEORGIA police are investigating a suspected bombing of the controversial Guidestones monument to globalism and population control.

A large part of the monument was shattered by an explosion in the early hours of July 6, Eastern US stardard time. A surveillance video of the explosion showed it occurred exactly at 3.33am, which could suggest occult numerology.

A poster on Twitter suggested the explosion also coincided with the 76th birthday of President George W. Bush, whose brothers were “graduates” of the Order of Skull and Bones elite masonic society at Yale University. Its symbol was 322.

A local TV station reported the remaining guidestones being leveled by an excavator later in the morning.

US patriots and others have long despised the Guidestones for their message proposing a world with a population maintained at 500 million “in perpetual balance with nature” and reproduction “guided wisely” – an oblique reference to population control and eugenics.

The message also proposes humanity united “with a living new language”, every nation protected with “fair and just courts” and a “world court” for resolving external disputes, balancing personal rights with “social duties”, seeking harmony with the infinite and not being “a cancer on the earth”.

The list of objectives is not sourced to anyone but aligns with Freemasonic, globalist and environmentalist ideals.

In 1979, a man using the pseudonym of Mr Christian hired Elberton Granite Finishing Company to build the monument. It was commissioned on behalf of a “small group of loyal Americans” who wanted to remain anonymous.

That may well be true, but the messages on the Guidestones have long been considered the work of the “Illuminati” and essentially anti-American, anti-people and anti-freedom. 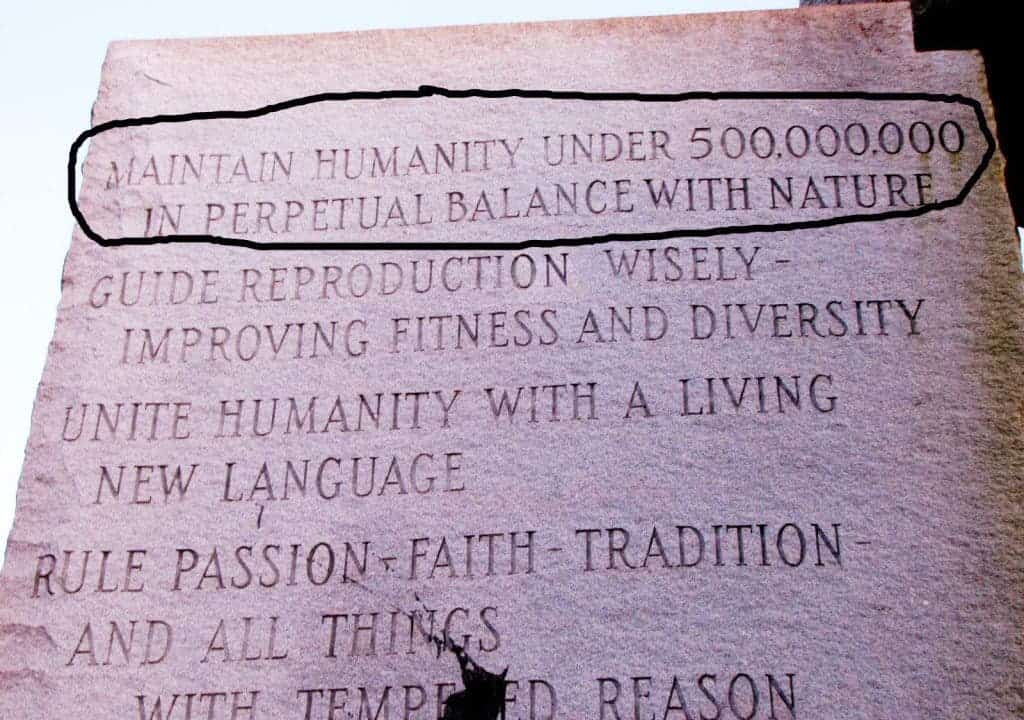 Posted on July 16, 2022, in ConspiracyOz Posts. Bookmark the permalink. Leave a comment.