← Still Trust your Government? – ConspiracyOz
Why is Canada Euthanising the Poor? →

Smith’s Weekly, in January 1939, reported on the scandal of the “organised starvation of the poor” by Australian governments.(ABC News: Gareth Hutchens)

I found an old Australian newspaper the other day, from 1939.

You should see the stories inside.

They touch on so many issues that concern us today that it makes you wonder: Have we been complaining and talking about the same things (and families) for more than 80 years?

If you’d like a break from coverage of the federal election, have a look at this.

The newspaper is Smith’s Weekly, a popular weekly paper published from 1919 to 1950.

Its hometown was Sydney but it was read around the country.

One of its founders was the journalist Robert Clyde Packer, the father of Sir Frank Packer, father of media baron Kerry Packer, and grandfather of James Packer.

Some famous people worked for it through the years.

Kenneth Slessor (the poet) edited it for a while. Henry Lawson, Dorothy Drain and Lennie Lower all wrote for it.

So, it comes from a time just before World War II officially began.

Have a go at its front page story.

“Organised starvation of the poor by Australian governments promises to leave on the political records of this generation the darkest stain in the Commonwealth’s history,” the story begins. “Denied the right of employment, 200,000 Australians, including adults and children, are being doled out food rations, which, even the BMA admits, are insufficient for the maintenance of healthy life.”

The story was written the same way as a modern news story.

Then they went to shops in three different suburbs (which they believed were representative of poorer suburbs in Australia’s capital cities) to see what food prices were like.

They wanted to see what groceries could be purchased with the food allowance.

They found the dole was set at “starvation rates”.

“With the single exception of Tasmania, every State in the Commonwealth has sentenced its unfortunate unemployed and many of its ‘fortunate’ employed to an apparent eternity of malnutrition,” the paper concluded.

As an aside, have a look at the graph below.

It shows how far the modern unemployment payment has been allowed to fall below the poverty line, in recent decades, by Liberal and Labor governments. 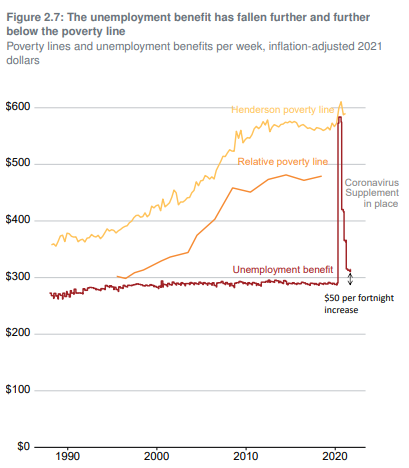 The unemployment benefit has barely increased in decades, and it’s well below the poverty line(Source: Grattan Institute, Orange Book 2022, page 35.)

It shows how hundreds of thousands of Australians were lifted out of poverty very briefly during the pandemic, when unemployment payments were increased temporarily, and how the federal government quickly pushed them back into poverty by taking those payments away again.

Australia, currently, has the second-worst rate of unemployment benefit in the OECD.

But let’s get back to the Smith’s Weekly story from 1939.

The paper’s journalists went door-knocking in Glebe and Woolloomooloo, two of Sydney’s poorest suburbs at the time, to ask people for their opinion of the food allowance.

In one house, in Norton Street, Glebe, a woman answered the door.

“Billy Hughes is always hammering away at more population, but he doesn’t tell us what to do when we do have children,” she said.

“I know they should have more milk, and this better balanced diet business, but keeping them from real hunger is an outsize job on its own.”

Another woman, in Woolloomooloo, scoffed at the idea that politicians would know how to survive on the dole.

“That’s about what some of these politicians and diet experts spend on one meal for themselves.”

The paper wrapped its story up with a message.

It said politicians seemed to have forgotten their responsibilities.

It said some were too busy pursuing ideological causes, such as trying “to impress Fascist methods on this Australian democracy”, or trying to conscript “the youth of the Commonwealth”.

It said politicians everywhere “must be forced to remember that the first responsibility of any government is to ensure that the people are properly fed”.

“Australia is a land of abundant food, but the fact, today, is that there are starved and semi-starved Australians,” it said.

“Politicians and military brasshats are shrieking from the house-tops for adequate defence.

“There is nothing better in the first place than filling the stomachs of the potential army.”

Jobs for the boys

There’s another familiar story on page 3.

It’s about Joseph Lyons, the conservative prime minister, handing a very well-paid job to a former colleague, and waiting until parliament was in recess before doing so.

Sir George Pearce, who’d been a cabinet minister in Lyons’ United Australia Party government, had been kicked out by voters at the 1937 election.

He’d served as a senator for 37 years and 3 months, which is the Australian record.

His term officially ended in 1938, after which Lyons gave him a three-year tenure with the Commonwealth Grants Commission, which paid handsomely. 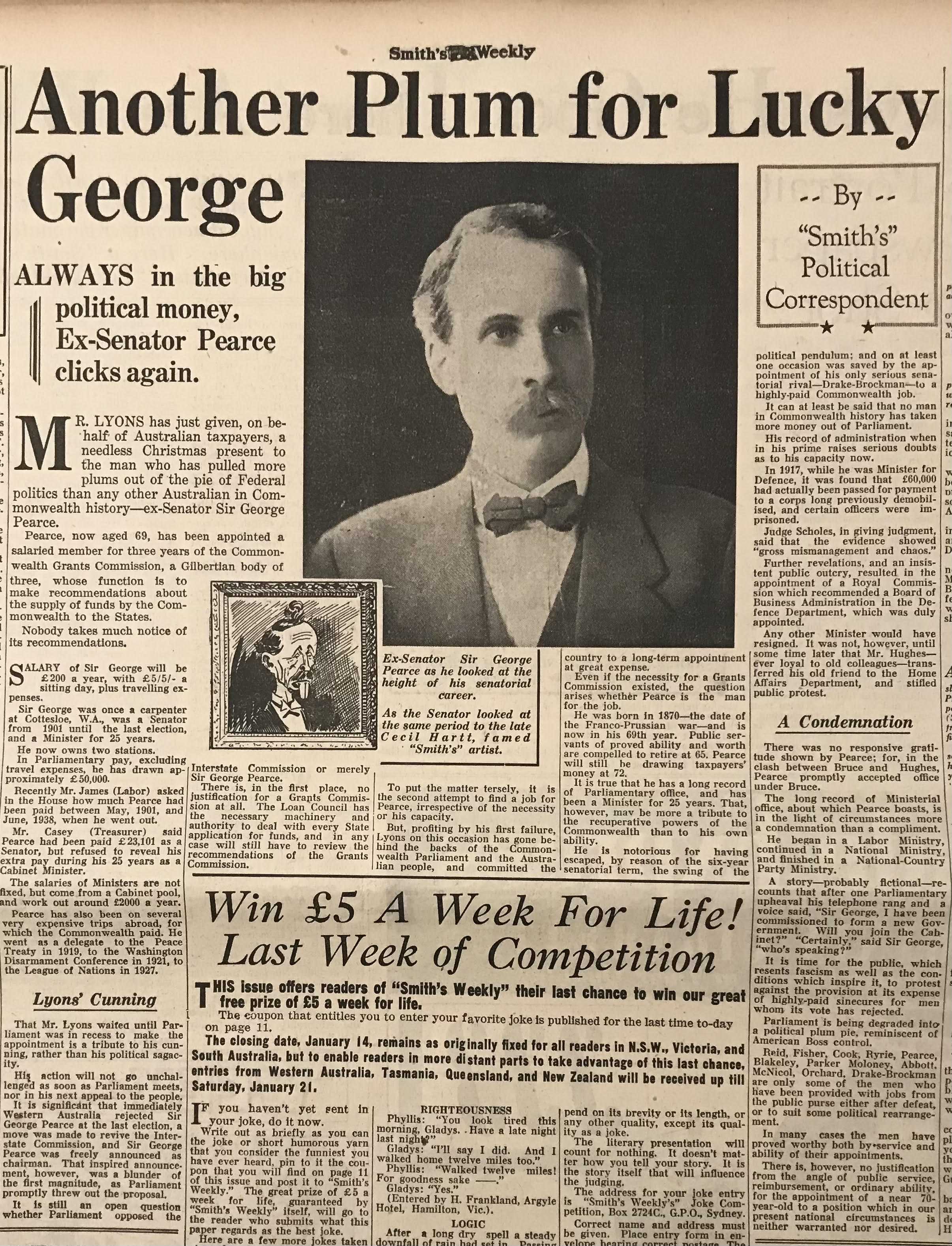 In Australia, the revolving door of politics has been turning for decades.(ABC News: Gareth Hutchens)

The Commission was created in 1933, by Lyons, to provide impartial advice on the distribution of federal assistance to the states. Today, it’s the body responsible for carving up the GST.

“Mr Lyons has just given, on behalf of Australian taxpayers, a needless Christmas present to the man who has pulled more plums out of the pie of Federal politics than any other Australian in Commonwealth history — ex-Senator Sir George Pearce,” the paper said.

“Sir George was once a carpenter at Cottesloe, WA, was a Senator from 1901 until the last election, and a minister for 25 years.

“It can be said that no man in Commonwealth history has taken more money out of Parliament.”

The paper criticised Lyons for giving his former colleague another job.

“That Mr Lyons waited until Parliament was in recess to make the appointment is a tribute to his cunning, rather than his political sagacity,” it said.

“To put the matter tersely, it is the second attempt to find a job for Pearce, irrespective of the necessity or his capacity.”

The federal seat of Pearce in Western Australia is named after the ex-senator (it is currently held by former attorney-general Christian Porter, who is retiring at the May election).

The paper reminded its readers of Pearce’s record in parliament (with a very negative spin).

“In 1917, while he was Minister for Defence, it was found that 60,000 [pounds] had actually been passed for payment to a corps long previously demobilised, and certain officers were imprisoned,” the paper reads.

“Further revelations, and an insistent public outcry, resulted in the appointment of a Royal Commission which recommended a Board of Business Administration in the Defence Department, which was duly appointed.

“Any other Minister would have resigned. It was not, however, until some time later that Mr Hughes — ever loyal to old colleagues — transferred his old friend to the Home Affairs Department, and stifled public protest.”

Smith’s Weekly was a fun read, mixing strong opinions with some sensationalist stories and satirical pieces.

It was mostly pitched to a male audience, returned servicemen, so I can’t tell if this story is serious or satirical.

I’m assuming it’s satirical. It must be.

But whatever the real opinions of the writer, Helen Seager, this article delivers an archetype of “crumb maiden” logic. 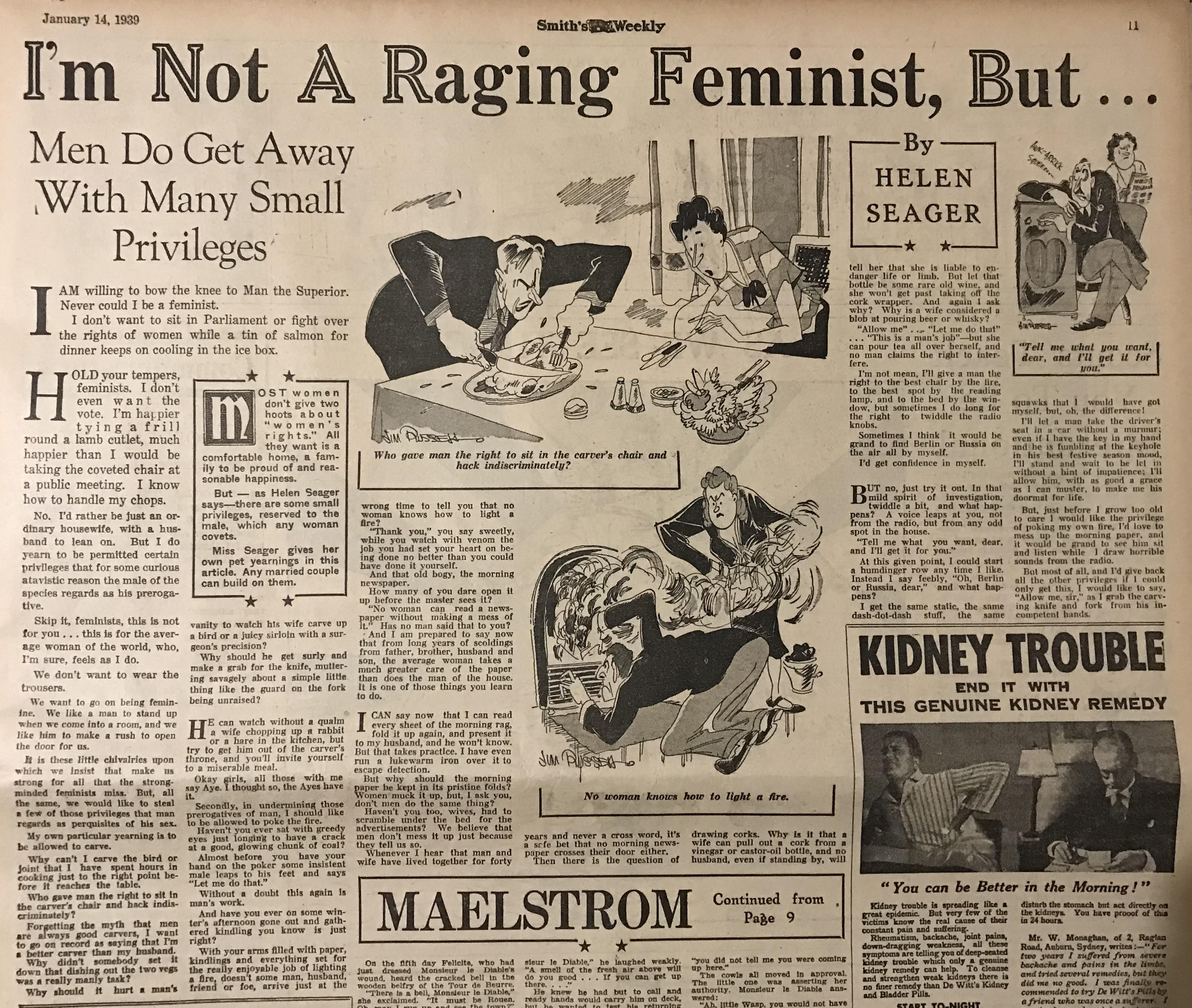 Well, Ms Seager tells the paper’s readers that the social order is fine the way it is, and she doesn’t want to rock the boat.

However, it would be lovely if men could grant women a few small “privileges”, she says.

“I am willing to bow the knee to Man superior. Never could I be a feminist,” Seager wrote.

“I’d rather be just an ordinary housewife, with a husband to lean on.

“But I do yearn to be permitted certain privileges that for some curious atavistic reason the male of the species regards as his prerogative.”

She’d really like to be allowed to carve the meat at dinner time.

She’d like to be allowed to light and poke the fire, to read the newspaper before her husband sometimes, to draw the cork from a bottle of wine occasionally, and to “twiddle the radio knobs”.

“Skip it, feminists, this is not for you,” she says.

“This is for the average woman of the world, who, I’m sure, feels as I do.”

Wherever he goes there are whispers

I could go on.

There are so many familiar stories in this single edition of the paper.

One story talks about the huge untapped potential of trade with India and countries in South-East Asia, if only the Australian government could get its act together.

Another talks about the rapacious landlords in Sydney that always increase the rent for small business owners whenever those businesses enjoy a slight increase in profits.

But let’s wrap it up with this one.

This story is about Sir Keith Murdoch, the father of media baron Rupert Murdoch. 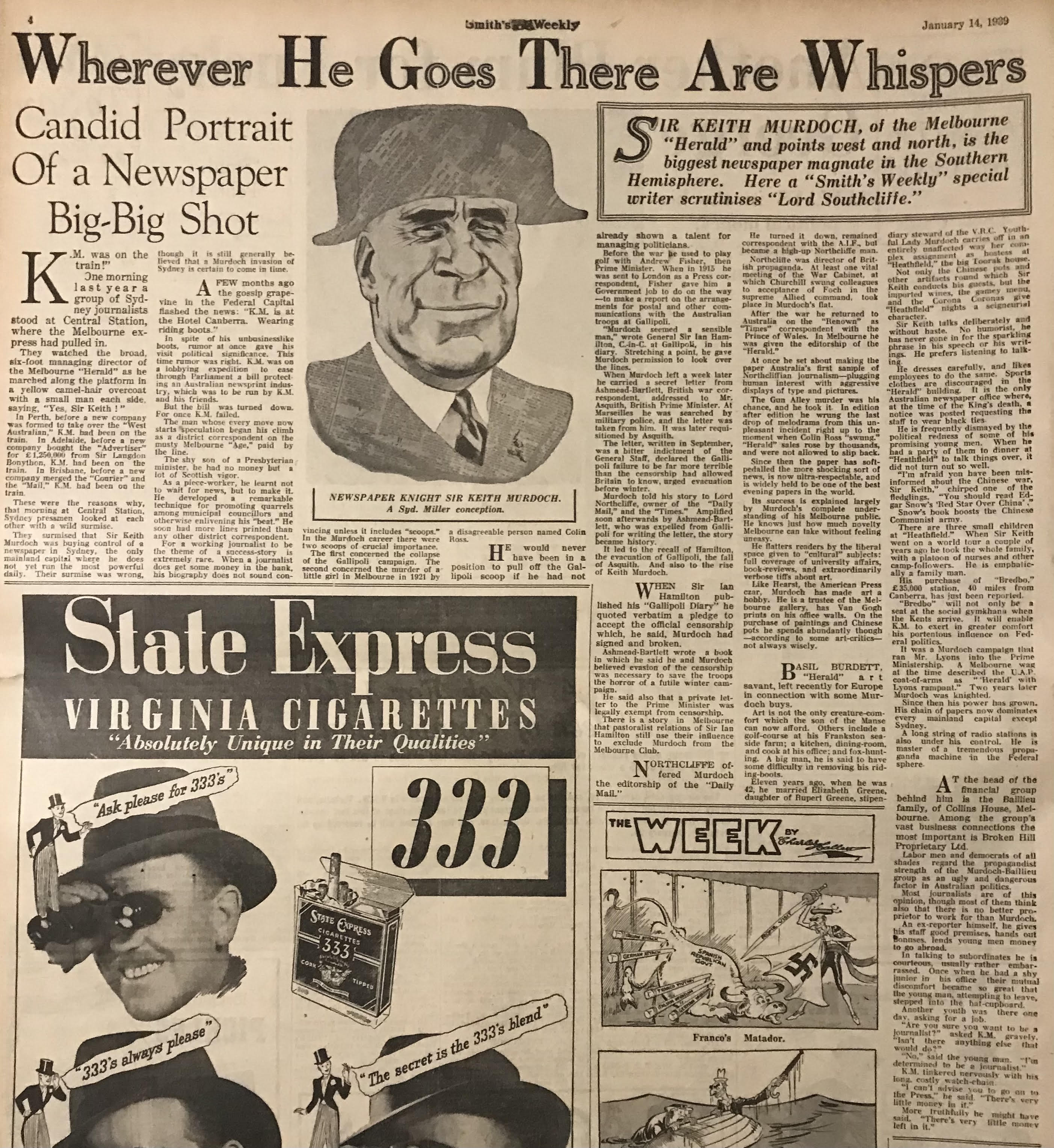 It talks about him like he’s a mythical figure.

It says whenever he’s spotted in public, in a different capital city each time, there always seems to be news, a little later, that he’s just bought a big newspaper in that town.

“A few months ago the gossip grapevine in the Federal Capital flashed the news: ‘K.M. is at the Hotel Canberra. Wearing riding boots’,” the story says.

“This time rumour was right. K.M. was on a lobbying expedition to ease through Parliament a bill protecting an Australian newsprint industry, which was to be run by K.M. and his friends.

“But the bill was turned down. For once K.M. failed.”

The story notes the role Keith played, as a journalist, in exposing how incompetently the Gallipoli campaign was being run, and how official military censorship was hiding the dire truth.

It also talks about the power he accrued as a media baron when he returned to Australia.

“It was a Murdoch campaign that ran Mr. Lyons into the Prime Ministership. A Melbourne wag at the time described the United Australia Party coat-of-arms as ‘Herald with Lyons rampant’,” the story says.

“Since then his power has grown. His chain of papers now dominates every mainland capital except Sydney. A long string of radio stations is also under his control.

“He is master of a tremendous propaganda machine in the Federal sphere.”

And the piece ends by noting the business interests backing Sir Keith.

“At the head of the financial group behind him is the Baillieu family, of Collins House, Melbourne,” the story says.

“Among the group’s vast business connections the most important is Broken Hill Proprietary Limited [that is, the miner BHP].

“Labor men and democrats of all shades regard the propagandist strength of the Murdoch-Baillieu group as an ugly and dangerous factor in Australian politics.

“Most journalists are of this opinion, though most of them think also that there is no better proprietor to work for than Murdoch.

“An ex-reporter himself, he gives his staff good premises, hands out bonuses, [and] lends young men money to go abroad.”

All those stories in a single edition of an Australian newspaper from 83 years ago.

Posted on April 30, 2022, in ConspiracyOz Posts. Bookmark the permalink. Leave a comment.

← Still Trust your Government? – ConspiracyOz
Why is Canada Euthanising the Poor? →