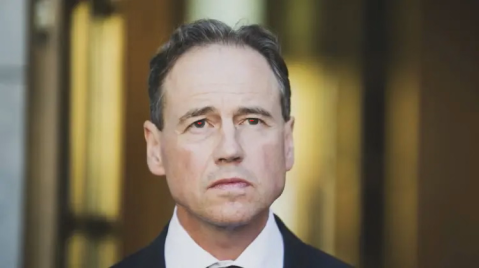 Greg Hunt may not be a nice person at all

Just because someone is a member of Federal Parliament doesn’t necessarily mean that they are on our side. New Zealand found that out in July 2020, when two Chinese-born members of the NZ parliament, one National and one Labour, resigned within 11 days of each other. The NZ security organisation had enough evidence that both were spies for the Chicoms. The Labour and National parties came to an agreement that they would be removed without fuss, and thus avoid mutual reputational damage.

There are three groups unhappy with the world as it is and want to change it: the Islamists, the Chicoms and the globalists. It is easy enough to guess who in Federal Parliament are the agents of the Islamists and the Chicoms.

But who represents the globalists? That would be Greg Hunt, the Liberal member for Flinders in Victoria. To provide background to that story, we will first detail some of the antics of the Biden crime family.

Biden pater was the Obama regime pointman for China and Ukraine, two of the most corrupt places on the planet relative to the money involved. Joe Biden visited Ukraine six times as vice president. Hunter Biden founded investment company Rosemont Seneca in 2009. Rosemont contributed to the first round of funding for a company called Metabiota. Metabiota’s business model was described as:

This is a unique company with a pioneering effort to protect the world from the spread of epidemics. The company has a worldwide network of on-the-ground experts with strong foundation (sic) of epidemiology and international field science. They assess epidemic risks in viral hot spots and provide strategies to help mitigate the spread of infectious diseases.

Since 2014, Metabiota has been a partner of EcoHealth Alliance as part of the U.S. Agency for International Development’s (USAID) “PREDICT” project, which seeks to “predict and prevent global emerging disease threats.” EcoHealth Alliance was the vehicle Fauci used to send funds to the Wuhan Institue of Virology to make deadly viruses to mimic what Nature might do.

Of all the tens of thousands of things that Rosemont Seneca could have chosen to invest in, it chose to make money out of viral pandemics. Why would they feel confident enough that the reward outweighed the risk? After all, if there were no pandemics the company would not make any money. The Biden crime family is all about peddling influence and using insider information. It is reasonable to presume that the Bidens were confident enough that a pandemic was coming.

The less charitable amongst us would jump to the conclusion that the planet is run by a cabal of murderous psychopaths. The second tier is the grifters out to make money by front-running the psychopaths. Thus the dodgy business model of Metabiota.

In the timeline of events, the Chicom evil scientists had produced the SARS and MERS strains of coronaviruses by 2003 and 2012 respectively. But both burned too hot to be good bioweapons — they killed too quickly and weren’t infectious enough. The Chicoms kept playing with SARS though. That is why it escaped from their labs so many times.

In 2010, Bill Gates gave his TED talk saying he wanted to save the world from global warming caused by overpopulation by using a vaccine. A vaccine is “something he loved”. His foundation has invested in Pfizer, so he can make money while he is at it. In 2017, Peter Daszak was videoed in a meeting saying that the program at Wuhan had produced “some real killers”.

On 19th October, 2019 the Bill and Melinda Gates Foundation (BMGF) and the World Economic Forum (the globalists) ran Event 201, which featured a “compelling narrative” about a pandemic. This was a practice run, training for controlling the narrative during a pandemic. While the psychopaths running the planet were expecting a pandemic, they were probably surprised by the timing of the outbreak, as the Chicoms were.

Everybody involved would have expected the Chicoms to develop a vaccine before releasing their bioweapon. When the outbreak came it seemed surprisingly weak. It hardly killed anyone, the young seemed spared and most of the infected didn’t even know they had it. It has since become more virulent. One theory of the origin of the covid virus is that it started as a live-attenuated vaccine for SARS, developed at the Wuhan Virus Institute, continuing work that had started at the University of North Carolina. The Wuhan institute had attempted to develop an oral vaccine for the Chinese Military but the virus started de-attenuating.

The model for that is what is happening in polio. In 1935 a live-attenuated polio vaccine being tested on 10,000 children in Philadelphia de-attenuated back to full virulence, killing five of the test subjects. In the 1950s the developer of the oral polio vaccine, Dr Albert Sabin, was careful to make sure the three strains he chose to make the vaccine were unable to re-assemble themselves to fully-virulent polio.

This worked up until 2017, when there were more new cases of poliomyelitis from the vaccine than from natural polio. By June of that year there were six cases of natural polio reported anywhere in the world and 21 cases of vaccine-derived polio. The vaccine cases look remarkably similar to regular polio, but laboratory tests show they’re caused by remnants of the oral polio vaccine that have gotten loose in the environment, mutated, and regained their ability to paralyze unvaccinated children.

The oral polio vaccine used throughout most of the developing world contains a live form of the virus that has been weakened in the laboratory. This vaccine is different from the injectable one used in most developed countries. The injectable vaccine is far more expensive and does not contain live forms of the virus.

By 2019 there were 176 cases of poliomyelitis worldwide derived from the oral vaccine, including ones in Egypt, Dominican Republic, Haiti, Philippines and Madagascar.

Explaining the process of de-attenuation is aided by considering polio and other RNA viruses as “quasispecies,” mutant swarms of virions in a constant search for fitness.

Now, back to the misanthropic plotting of Bill Gates and the globalists. Ivermectin was found to have efficacy against covid in April 2020. And threatened to stop covid before it killed hardly anyone, certainly not the numbers dreamed of by the globalists. Not to worry, assets were already in place for this eventuality, including assets in Australia.

One of the many studies showing ivermectin’s clinical efficacy was one by Elgazzar in Egypt. Based on a hit piece, the study was withdrawn by its publisher. This in turn enabled The Guardian to write a derogatory piece on ivermectin that quoted a chronic disease epidemiologist from the University of Wollongong, Gideon Meyerowtiz-Katz. The University of Wollongong had received a US$0.977 million grant from the Bill and Melinda Gates Foundation in October, 2016. The grant was for making a better hydrogel condom. It had a duration of 42 months which means it lasted up to the outbreak of the virus.

As minister for the environment under Abbott and Turnbull, he is notable for talking Abbott out of repealing the National Greenhouse and Energy Reporting Act, three days after the Abbott government was elected on its promise to repeal the carbon tax.

His modus operandi as minister for the environment was to give big grants to compliant academics to do fluffy studies, who in turn would parrot the global warming line to the media on demand.

In January 2017 Greg Hunt was made Minister for Health. He justified his transfer to health by saying that his mother and his wife were nurses. But he would be more useful to the globalists in tending to the coming pandemic than keeping global warming alive.

In July 2020 Greg Hunt flick-passed $970,000 to a company called Merunova to study back pain, meaning that the founders of that company were spared a life of work for a while. But one of these, a Dr Kyle Sheldrick, had to sing for his supper as a co-author of an article entitled “The lesson of ivermectin: meta-analyses based on summary data alone are inherently unreliable”. A back-pain man is motivated enough to take time out to opine on ivermectin, an antiviral? Well, motivated by money provided by taxpayers. Mr Gideon Meyerowitz-Katz was recycled to be a co-author of this paper with Dr Sheldrick.

The saying is “Once is happenstance, twice is coincidence and three times is enemy action”. But this is too much coincidence — it is enemy action. Both Bill Gates and Greg Hunt give grants to medical researchers who then are co-authors of the same paper attacking ivermectin? That is coordination. The chances of these people knowing each other prior to the appearance of the paper are impossibly small.

The technique used in global warming is being recycled for the virus. Pay off some shifty, work-shy academic who then delivers the required message on demand.

Greg Hunt’s collusion with Bill Gates’ foundation on the ivermectin hit piece explains why he is keeping ivermectin out of the country. And why he is wilfully blind to the success of ivermectin in Indonesia.

If Australians suffer and die as a result of being denied ivermectin, it is possible our federal health bureaucracy won’t lose any sleep over it. To paraphrase Walter Duranty on the Holodomor, you can’t make a New World Order without breaking eggs.

Given the success of ivermectin in Indonesia, any further deaths from the virus in Australia are state-sanctioned murder. And that goes for the deaths and disability due to the useless vaccines too. The largest number of people killed by the actions of an Australian politician to date are the 250,000 East Timorese shot by invading Indonesians in 1975 after Gough Whitlam gave Sukarno the green light to invade at their meeting in Townsville.

Scaling from the US and UK experiences, letting the virus rip in Australia while not allowing Australians to protect themselves with ivermectin will result in perhaps 100,000 dead in the first couple of years. Greg Hunt knows what he is doing. He will soon vault to No 2 behind Gough Whitlam. Curse him in living and curse him in dying.

Posted on April 28, 2022, in ConspiracyOz Posts. Bookmark the permalink. 1 Comment.