Great to see a ‘No Mandatory Vax Party’ in W.A. – ConspiracyOz

Community Leader For No Mandatory Vaccinations

Join me in the fight against the provisions in the WA Public Health Act (2016) that allow for mandatory vaccinations to be administered against your will.

The ‘No Mandatory Vaccination Party’ received 23,178 votes – the 5th highest amount of votes behind Labour, Liberal, The Greens and National Party. We received more votes than One Nation and Australian Christians. A great first effort and big thank you to all the candidates and volunteers!

The 2021 WA State Election was held on 13 March 2021. The party received 23,178 votes which is 1.6% of the total vote. See the image below. Help prevent mandatory vaccinations by becoming a member of the No Mandatory Vaccine Party today. Click the Join Us button above or below. It’s free and only takes 30 seconds to complete.

Section 158 of the Western Australian Public Health Act (2016) allows for forced vaccines and removal of underwear.

Under Section 197 of the Western Australian Public Health Act (2016), the Chief Health Officer may authorise persons to administer poisons by force. 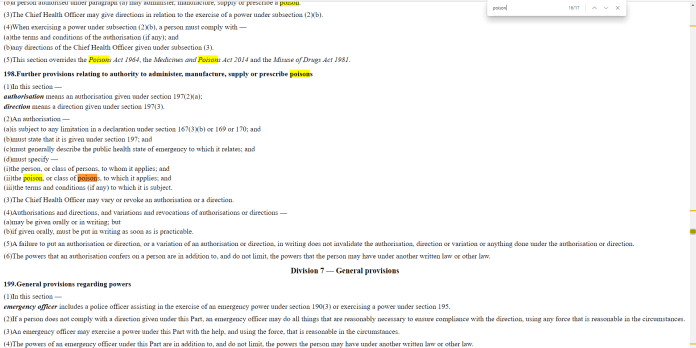 Posted on July 14, 2021, in ConspiracyOz Posts. Bookmark the permalink. 1 Comment.