Restaurants, cafes, and stores have closed on King Street in Newtown.(AAP: Joel Carrett)

It’s one of Sydney’s trendiest high streets, home to pubs, restaurants and vintage clothes shops — and it’s been split in two by the city’s COVID lockdown.

On one side of King Street in Newtown in Sydney’s inner west, businesses have been forced to shut their doors during the week-long lockdown which came into effect early this morning.

On the other, stores are allowed to remain open due to a geographical quirk.

King Street sits right in between the City of Sydney and Inner West local government areas (LGAs) and in some places the boundary runs straight down the middle of the bustling thoroughfare.

Businesses on the City of Sydney side were put into lockdown from 11:59pm yesterday — along with Waverley, Randwick and Woolahra LGAs.

People living and working in these areas cannot leave their home unless they are shopping for essential goods and services, receiving medical care, exercising or conducting essential work or education. Non-essential businesses must also close.

The Inner West remains unaffected by stay-at-home orders, with businesses on that side of the road allowed to remain open as long as they adhere to the four-square-metre rule, with bar and restaurant patrons remaining seated.

The rules have created a divide on King Street and led to widespread confusion, with some businesses shutting just because they aren’t sure what public health orders apply. 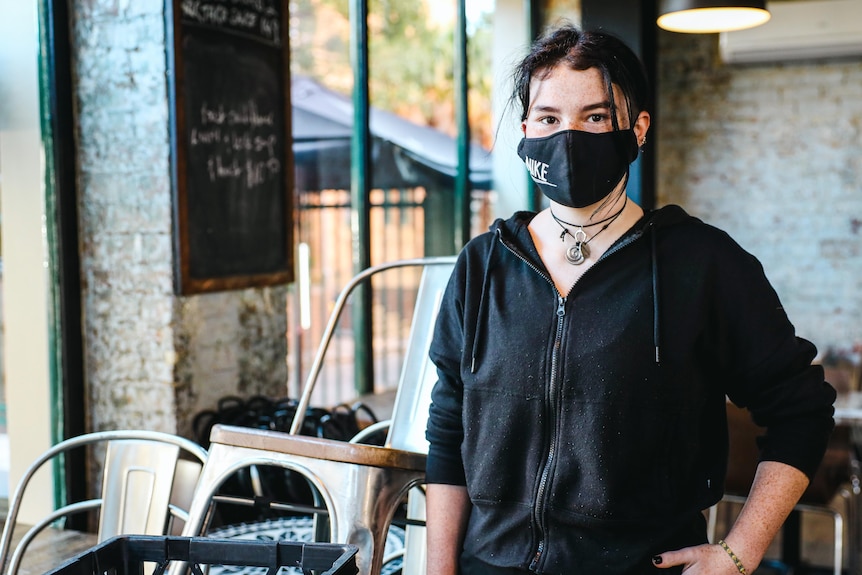 Erin O’Leary says the front of her cafe is under lockdown but the back is not.(ABC News: Tim Swanston)

Manager of Corellis Cafe in Newtown Erin O’Leary is on the locked down side of King Street — only just. Damien Arkins, co-owner of Repressed Records, is on the Inner West side of King Street so can stay open but said he found the rule “ridiculous”.

“COVID doesn’t understand that there’s a border there,” he said, adding that all of Sydney should be under lockdown.

“Why do a half measure? Just lock down the whole city so we’re all in it together … Delta [strain] doesn’t mess around.”

On Saturday, NSW Health recorded another 12 locally acquired COVID-19 cases, none of them in the locked-down LGAs.

Premier Gladys Berejiklian said the government had not ruled out extending restrictions this weekend.

On the other side of the road, at Tre Viet restaurant, manager Trang Pham said she was struggling and had to throw out all the food that would not keep during the week-long closure.

“Everyone on both sides of the street needs to stay home so we can get rid of this,” she said.

Ms Berejiklian said on Saturday morning that the crisis cabinet committee would evaluate and update the health advice, but she hoped the community would “exercise their common sense”.

“There are literally streets where across the road things change, but in a situation like this, you have to draw the line somewhere,” she said.

“No matter what rules we put in place, we also need people to … act in a way which is going to protect them and their loved ones.” Andrea Chapman owns Homeworks Design Store, which is also on the locked-down side and described the rules as “really arbitrary”.

“Piecemeal is not always the best option. Sometimes you’ve just got to hit everyone hard and everyone sucks it up, then we can move on,” she said.

Ms Chapman said shutting down a few areas did not take into account how people moved across Sydney.

“It’s not like everyone who went to the [Joh Bailey] hairdresser in Double Bay [a COVID-19 exposure site] lives in the Eastern Suburbs.” Further up King Street, at the Alba Salentinian restaurant, manager Andrea Taccoa was confused about the situation and had been trying to get answers through Service NSW without much luck.

“They haven’t been very clear in regards to businesses operational hours,” he said.

“They have been very clear on what people can and can’t do but it’s not the same for businesses.”

He said he desperately needed to know where he stood as he didn’t want to open and get a fine.

“It’s confusing … and unfair … but there’s not much I can do about it.” The Botany View Hotel on King Street is outside the lockdown zone.(ABC News: Stephanie Corsetti) On the same road, the Marlborough is subject to the closure rules.(Supplied: Facebook)

Ella Pash, manager of small bar, Corridor, said shutting for a week was “devastating” for her casual staff and there should be a uniform approach for King Street.

“I mean, it’s just an imaginary line,” she said.

Back at Corellis Cafe, Ms O’Leary said she would likely have to throw out stock and staff would lose shifts.

“I doubt we’re going to be getting the kind of business we usually get,” she said.

“Sunday is usually our busiest day of the week, we usually have hundreds of customers through here, without church going ahead I doubt we’ll have much business.

“There will be casualties when it comes to stock and staff.”

Many businesses on the City of Sydney side of King Street aren’t hopeful they’ll receive any compensation for shutting.

“We cannot afford to let [these businesses] suffer and potentially close,” the letter read.

The Commonwealth Chief Medical Officer Paul Kelly has extended a declaration to include parts of Sydney as COVID-19 hotspots for the purposes of Commonwealth support.

That triggers a COVID-19 disaster payment for those workers who are unable to earn an income due to NSW public health orders.

Both the City of Sydney and Inner West Council areas said they did not control how the rules applied on King Street as it was a state government public order.

Posted on June 29, 2021, in ConspiracyOz Posts. Bookmark the permalink. Leave a comment.