Breaking: The Gates are Crashing Down – ConspiracyOz

Bill and Melinda Gates’s divorce is a big deal.

The announcement of their split in a joint statement on Twitter immediately became global news.

They said they would continue to work together as part of their massive charity foundation but “no longer believe we can grow together as a couple in this next phase of our lives”.

Here’s what we know.

Who are Bill and Melinda Gates?

Bill Gates is one of the co-founders of computer company Microsoft.

He dropped out of Harvard University to start the company with his childhood friend, Paul Allen, in 1975. Mr Allen died in 2018.

Mr Gates owned 49 per cent of Microsoft at its initial public offering in 1986, which made him an instant multi-millionaire.

Melinda Gates, then Melinda French, started working at Microsoft as a product manager in 1987.

She has a bachelor’s degree in economics and computer science, as well as an MBA (Master of Business Administration).

In 2000, the pair launched the Bill and Melinda Gates Foundation, which focuses on a broad scope of global health and development projects.

Their work earned them high honours, such as the Presidential Medal of Freedom in 2016 and a gong as Time Magazine’s Persons of the Year in 2005.

Mr Gates was Microsoft’s chief executive until 2000, when he began gradually scaling back his involvement in the company.

He transitioned out of a day-to-day role in Microsoft in 2008 and served as chairman of the board until 2014.

Last year, Mr Gates said he was stepping down from Microsoft’s board to focus on philanthropy. The pair, pictured here in 2005, launched the Bill and Melinda Gates Foundation in 2000. (AP: Gazi Sarwar)

How long were they married?

They met at a work dinner, with Ms Gates beating Mr Gates at a maths puzzle.

In the 2019 Netflix series Inside Bill’s Brain, the pair spoke about his decision-making process about marrying her after about a year of dating.

Ms Gates said she walked in on her then boyfriend making a list on his whiteboard.

″He had to make a decision… his whiteboard had the pros and the cons of getting married,” she said.

The pros must have outweighed the cons, because they got married in Hawaii in 1994 when Mr Gates was 38 and Ms Gates was 29.

They have three children together — Jennifer is 25, Rory is 21 and Phoebe is 18. 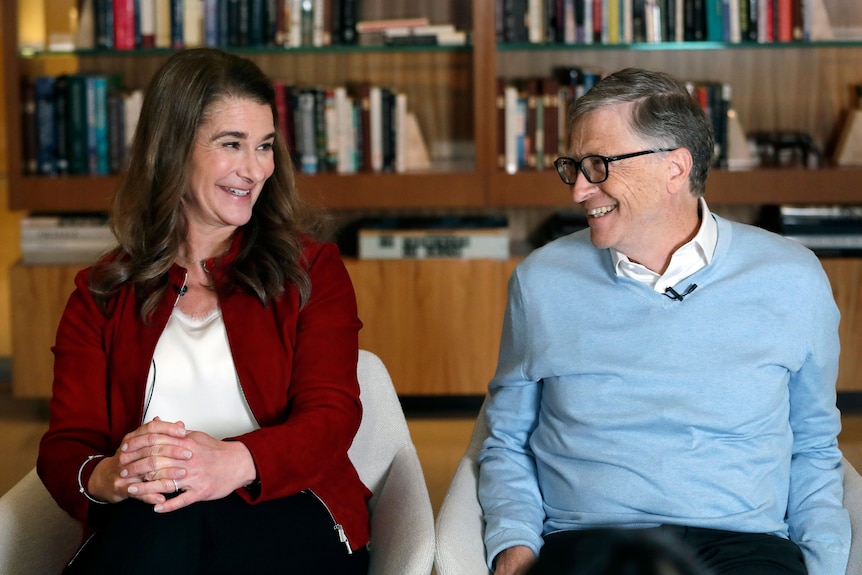 They first met at  Microsoft work dinner, dating for about a year before talks of marriage came up. (AP: Elaine Thompson)

How much are they worth?

Bill Gates is the world’s fourth-richest person, with a net worth of $US130.5 billion ($168.2 billion), according to Forbes.

He was once the world’s richest person but lost that title, partly by donating money to philanthropic causes.

How much will they end up with in the split?

We don’t know yet.

But they are seeking division of joint assets, according to a separation agreement they have reached.

In a joint petition for dissolution of marriage they asked the Seattle’s King County Superior Court to approve their agreement on the division of assets but didn’t disclose the details.

They live in a custom mansion with an assessed value of $US140 million close to Microsoft headquarters in Lake Washington, near Seattle.

Washington state law presumes that most property acquired over the course of a marriage belongs jointly to the spouses and is divided equally in a divorce.

However, under this law spouses can agree that certain assets are separate property, granting ownership to just one of them.

But as both have referred to each other as “equal partners” in the past, it’s possible they might go for a 50:50 split.

We can also look to other high-profile divorces, such as the split between Amazon founder Jeff Bezos and MacKenzie Scott, for an idea of how this could work.

Ms Scott ended up with a 4 per cent stake in Amazon, worth about $US36 billion, which made her the world’s third-richest woman at the time.

She pledged to give half of it to charity.

Mr and Ms Gates have been open in the past about bequeathing the vast majority of their wealth to charity, with a Washington Post report from 2014 indicating the pair planned to leave an inheritance of just $US10 million (a tiny fraction of their fortune) for each of their children.

What’s going to happen to their charity?

The pair say they will keep working together in their existing roles as co-chairs and trustees of their foundation.

And it doesn’t sound like it will be going bust any time soon.

From 1994 through 2018, the couple gave the foundation more than $US36 billion, according to its website.

Warren Buffett has donated more than $29 billion of his fortune to the Gates Foundation since 2006, according to filings.

The Seattle-based charity is the most influential private foundation in the world, with net assets of $43.3 billion at the end of 2019, according to the latest full-year financials shown on its website.

David Callahan, founder of the Insider Philanthropy website, says it’s too early to know how the divorce will affect the foundation.

He thinks Ms Gates may pursue her own philanthropic work.

“You can imagine two separate tracks where they’re both working together at the foundation, and each is pursuing their own independent philanthropy outside the foundation,” Mr Callahan said.

Posted on May 4, 2021, in ConspiracyOz Posts. Bookmark the permalink. 1 Comment.