Life After 100…The Meaning of Life – ConspiracyOz

This is a Globalist’s nightmare, for the average person to out live them…how dare they.

Being Together by staying apart? don’t make me laugh..BAHAHA!! – Mick Raven

The centenarians dominating one region of Sardinia

(CNN)Antonio Todde was the first man in the world to live to 110, and he resided in Tiana, a village on the Italian island of Sardinia.

Tiana is just one village within an extraordinary region in which the proportion of centenarians has been found to be three times greater than in the rest of Sardinia — and mainland Italy.

Although good genes, diet and exercise are often cited as crucial to living a long life — which they are in most places — research in this Mediterranean region indicates that social interaction may be just as influential. 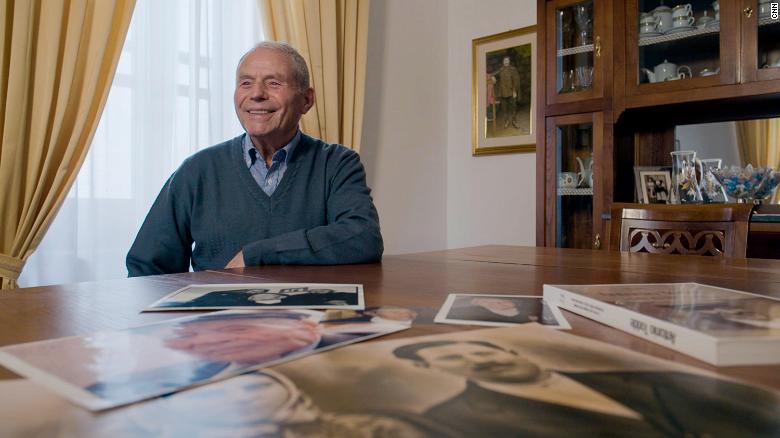 Tonino, the son of the world’s first man to live to 110 years old, reflects on pictures of his late father.

Here, observations suggest that care and attention from family members and being closely involved in community activities help maintain a healthy mental state, which is critical to overall well-being.

In the early 2000s, demographer and physician Dr. Giovanni Pes found remarkably low mortality rates and high life expectancies among several villages in central Sardinia. He marked each settlement onto a map, eventually creating a cluster of blue marks.

He labeled the region a blue zone, a term now used to refer to any area with extraordinarily long-living populations. Five have been identified, including Nicoya, Costa Rica, and Ikaria, Greece.

What makes the Sardinian region unique is its larger-than-average population of elderly men. “In most western countries, the sex ratio at 100 is 1-to-4 in favor of women,” Pes said. In this central Sardinian area, “it’s 1-to-1: We have the same proportion of men to women at advanced age.”

To find out why this is the case, Pes initially analyzed the population’s gene pool. He had subscribed to the idea that geographical isolation may have resulted in genetic variants that favor longevity to be kept among locals.

But genetic factors only explained “only 20% to 25% of the average lifespan,” he said.

Interviews with elderly people and historical data suggested that social and psychological factors are just as important.

Luigi Corda, author of “100 X 100: The Twentieth Century Through Portraits of a Hundred Sardinian Centenarians,” spent two years photographing and interviewing centenarians in the regions of Barbagia, Ogliastra, Trexenta and Middle Campidano, where he saw the important role played by family.

“Family has a fundamental role in the possibility of living such a long life,” he wrote in his book. “The fact of still feeling important, being the center of attention and head of a family, makes them active and gives them the strength to move ahead, underlying the importance of the family, in addition to genetic aspects, diet and religion.

He also noted that all of the centenarians he met were in excellent health, do not take much — if any — medication and are astoundingly lucid. They are “often read without glasses and continue to do what they have always done,” he wrote.

For his “100 Centenarians” project, Luigi Corda spent two years photographing and interviewing people on the island of Sardinia. 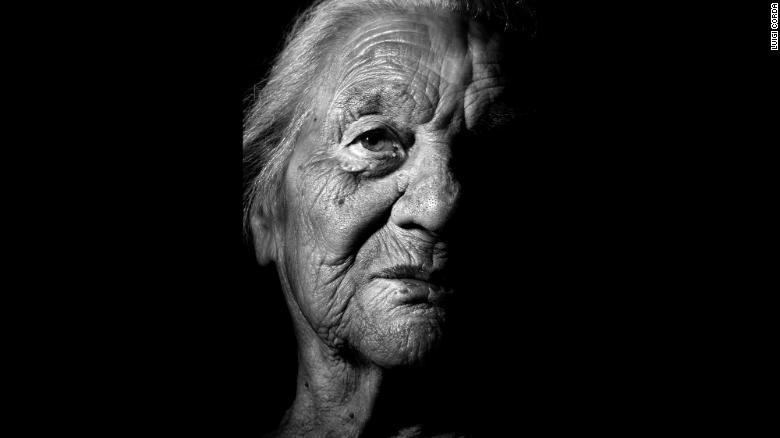 Pasqualina Schirru, born in 1907, worked in the mines. Cactus berries are among her favorite foods. 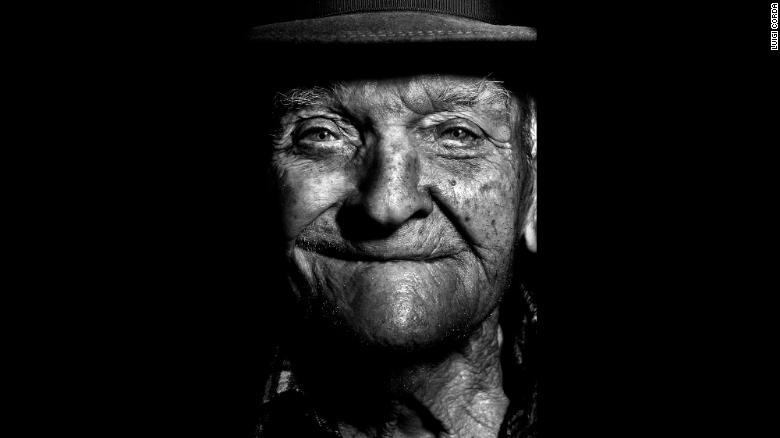 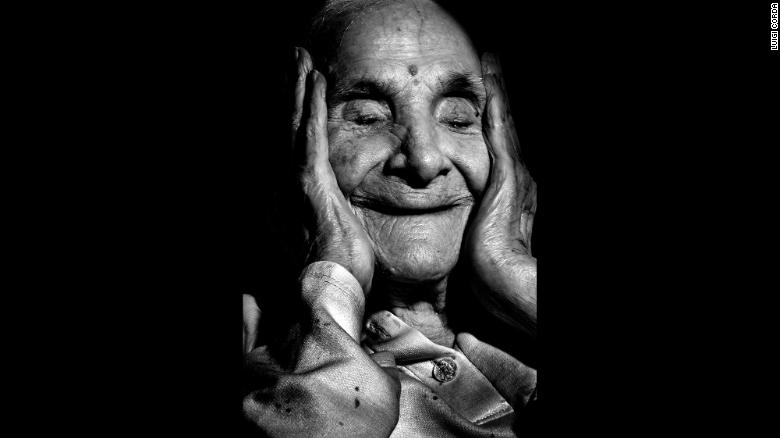 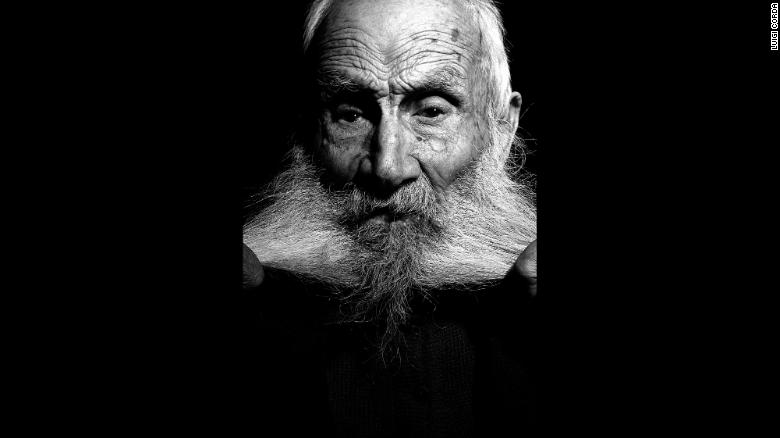 Salvatore Spano, born in 1907, loves dancing and takes a daily spin on his bicycle. 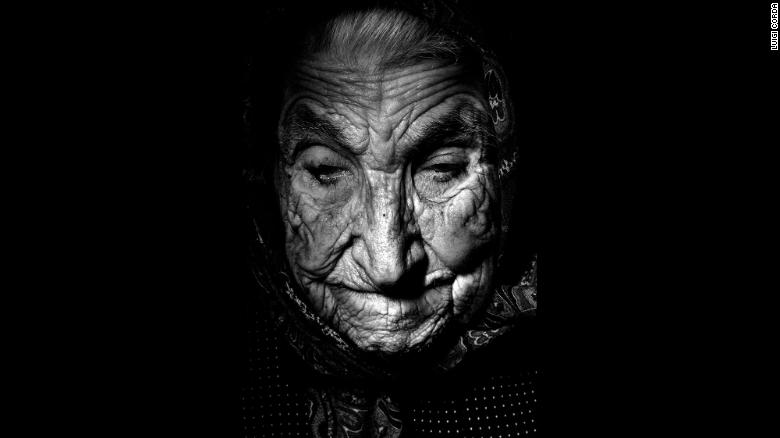 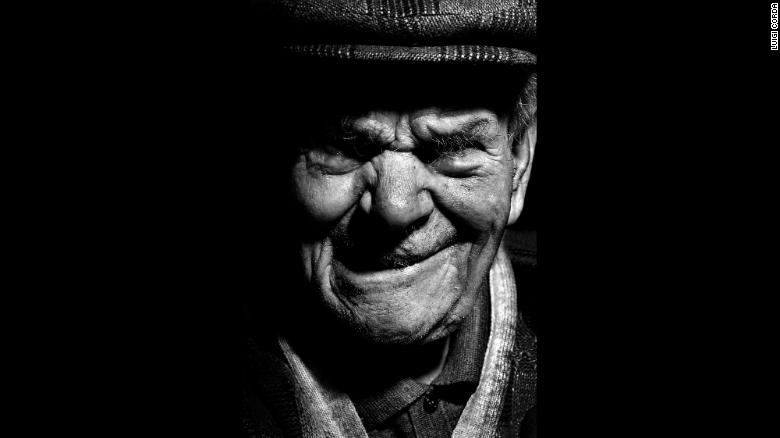 Salvatore Meloni, born in 1908, is a farmer and a shepherd and goat herder. 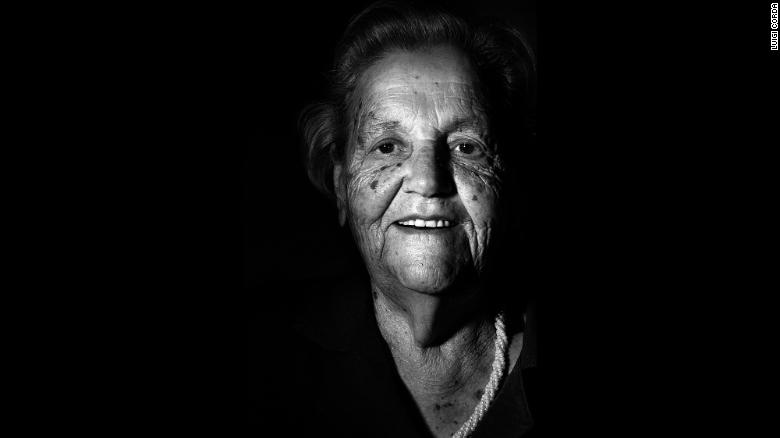 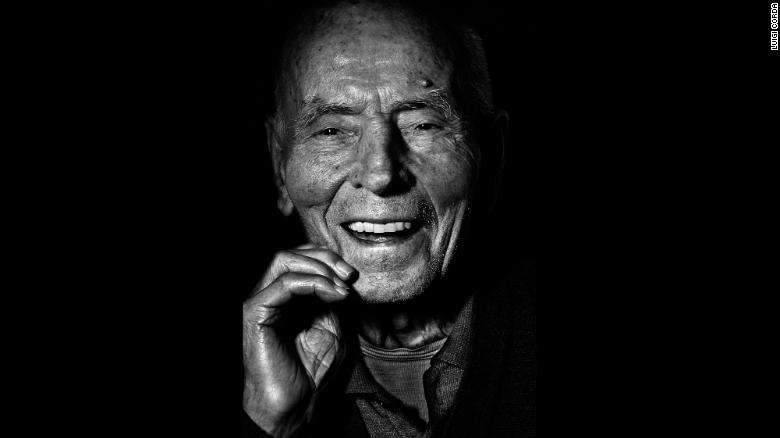 Michele Falchi, born in 1908, is a barber who enjoys sewing and dancing. 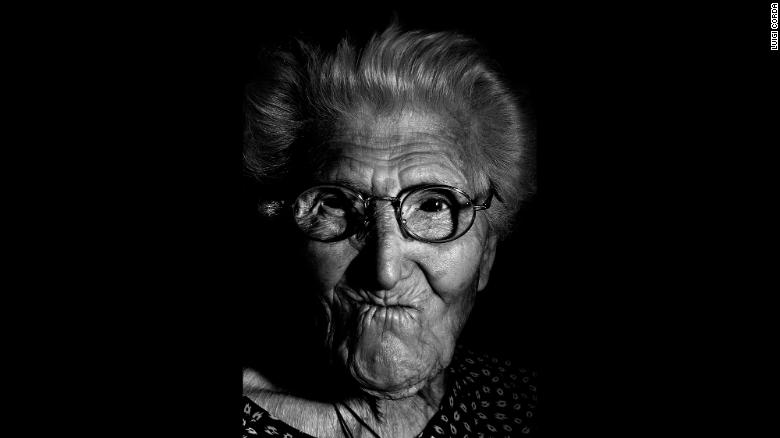 Maria Bonaria Argiolas, born in 1909, prays every day and enjoys watching the news on TV. 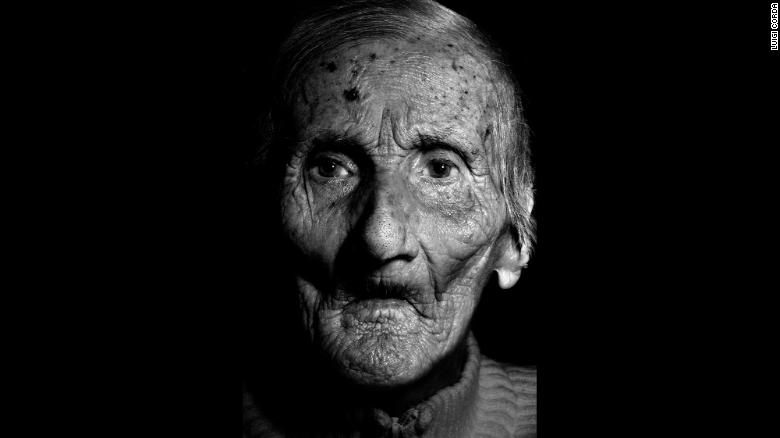 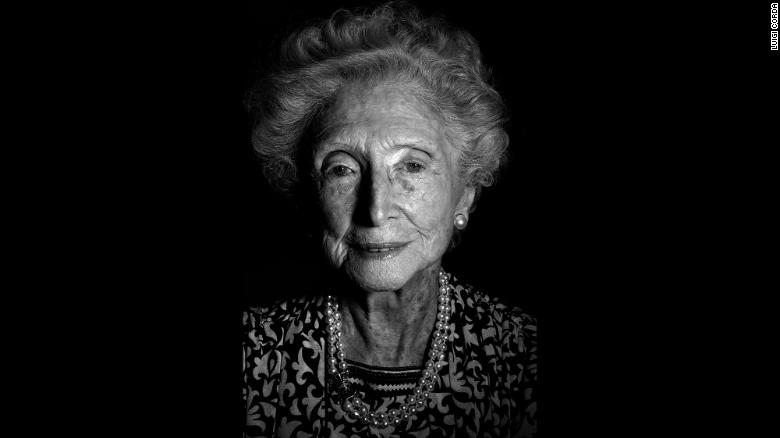 Maria Bartolino, born in 1908, did the shopping and made lunch every day until she was 99. 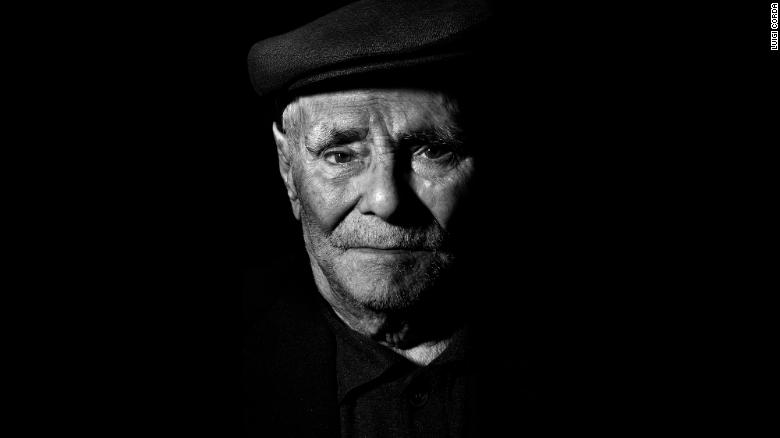 Giovanni Lai, born in 1906, is a shoemaker and farmer who loves lasagna and has a glass of wine at every meal.

In contrast with many parts of Northern Italy, it is unusual for older people in this region to be put into institutional care,

according to Maria Chiara Fastame, a psychologist based at the University of Cagliari in southern Sardinia. 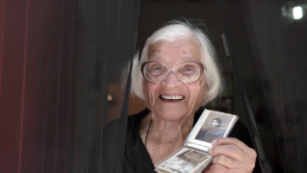 Ikaria, the Greek island where people live long and well

Relatives and neighbors look after the elderly, she said, making the home a space of everyday contact between young and old. Older generations are not seen as a burden but rather as people transmitting values and local knowledge. “They are a resource for the community,” Fastame said.

“Where I grew up, I was surrounded by elderly people who worked and reared animals,” said Claudio Cabiddu, who was born in this region and is studying the psychology of centenarians at the University of Cagliari. “If we can’t learn from them now and pass on this knowledge to our children, we are losing out.”

In his village, older people are welcomed home and cared for by their families. Cabiddu has found that attitudes are very different in Caligiari, as older people live more independent lives. “When there’s an elderly person in the house,” he said, “a support network needs to be in place so that that person doesn’t feel alone.”

As well as being a core part of the household, older people maintain social networks in the community by organizing and taking part in local events, Cabiddu said. Fetes and sporting events in the main square of his village provide occasions for locals to gather.

“They also meet after lunch in the square to have a chat, enjoy a game of cards and socialize,” he added.

By staying embedded in the social life of the village, older people maintain an active and valued role in the community, Fastame said. This keeps their minds sharp. “If you are involved with many activities, physical or cultural, it means that your mind is more efficient,” she said. 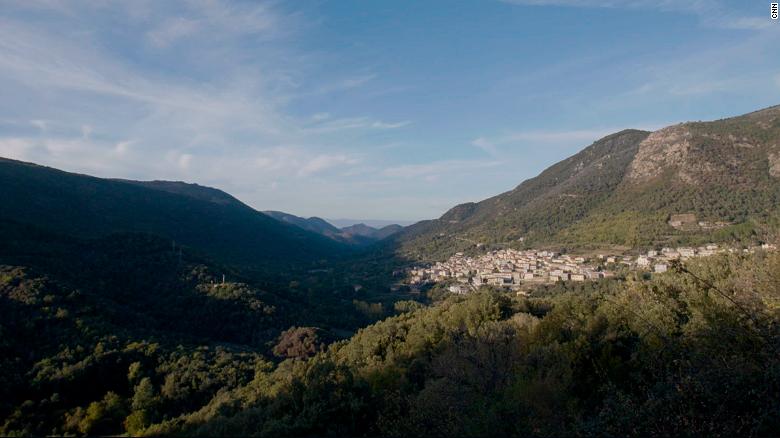 The village of Tiana, in the province of Nuoro, central Sardinia, where Antonio Todde lived to 110.

Whilst there is a vast literature on the benefits of close friendships and family ties, it is the work of the psychology department at the University of Cagliari that found in a 2017 study that older people from the Sardinian blue zone are involved in more social and leisure activities compared to older populations of other areas.

This created a different psychological pattern that was tied to longer lifetimes.

From a psychological perspective,” Fastame said, “the social context is fundamental to get old well.”

Sarah Harper, professor of gerontology at the University of Oxford in the UK, agreed that the social world people live in is significant to living a longer life. “We know that in many ways, this can have almost the same effect as living a good life, eating well, not smoking, not drinking too much alcohol.” 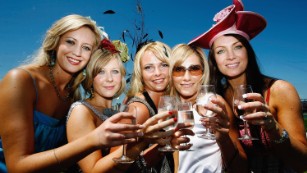 Saying this word can extend your life 01:13

In this region in central Sardinia, the older population “is very unusual in that they have very low levels of depressive symptoms,” said psychologist Paul Hitchcott of the University of Caligari.

He is also part of the team examining the minds of Sardinian centenarians.

Although they don’t lead idyllic rural lives, they have “a resistance to the normal knocks that older people have later in life.”

Sardinia is known as an island with low income and endemic disease, Pes said, as well as a “not-exceptional health situation.” It is their tight-knit relationships that have helped residents cope with difficulties in their later years, he said.

Hitchcott’s research has also found that older people here have a better working memory than subjects in Northern Italy.

Because they were more involved in activities, they were less sedentary, more physical activities; these aspects all together promote well-being, physical and psychological,” he said.

In the search for the answer to longevity, there is no single explanation, Pes believes. “It is rather the interaction of many different factors.”

Social components are important to avoid isolation and depression, but they are intertwined with other factors to enable people to live to (and past) the age of 100, Pes said. Additional research is still required to deepen our understanding of successful aging.

We are witnessing an exceptional situation,” he said — one that needs to be explored further.

Posted on December 26, 2020, in ConspiracyOz Posts. Bookmark the permalink. Leave a comment.