Ban Hydroxychloroquine and Yet the Covid19 Vaccine Kills – ConspiracyOz

Hydroxychloroquine is back in the spotlight this week as we look at a new push by Liberal backbenchers Craig Kelly and George Christensen to lift a ban on the drug being prescribed as a COVID-19 treatment.

Craig Kelly and George Christensen say hydroxychloroquine works. Does it?

Federal Coalition backbenchers Craig Kelly and George Christensen have taken their pro-hydroxychloroquine stance offline, sending an open letter to Queensland’s Chief Health Officer Jeannette Young which later turned up in Queensland mailboxes (though the two deny any involvement in its wider distribution).

The letter calls on Dr Young to overturn an order banning doctors from prescribing the controversial drug hydroxychloroquine as a COVID-19 treatment, arguing that the drug is safe and effective.

“There is now a very significant body of studies that have found [hydroxychloroquine] is associated with substantially reducing both death and hospitalisation in COVID-19 patients,” the letter claims.

What do the experts say?

Although various studies into hydroxychloroquine are continuing, at this stage its use as a COVID-19 treatment remains “strongly discouraged” by the Therapeutic Goods Administration, which cites the results of several large studies (conducted by the World Health Organisation, the US National Institutes of Health and Oxford University) as a basis for its advice.

“Recent media commentary claiming that hydroxychloroquine, on its own or in combination with azithromycin or zinc, is effective for the treatment of COVID-19 has tended to refer to research findings from clinical studies that were non-randomised and therefore provide less reliable evidence,” the TGA said in a statement issued in August. 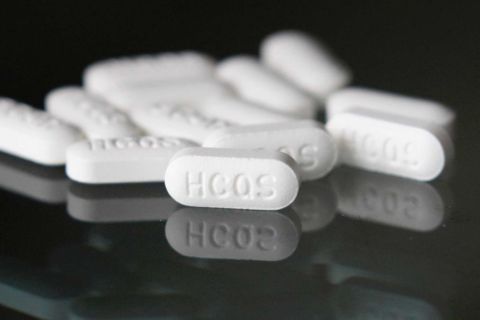 Hydroxychloroquine has been the subject of much misinformation during the COVID-19 pandemic.(AP: John Locher)

The National COVID-19 Clinical Evidence Taskforce, which undertakes “continuous evidence surveillance” to provide guidelines on clinical care for COVID-19 patients, also recommends against the use of hydroxychloroquine.

Speaking to Fact Check this week, the executive director of the taskforce, Julian Elliott, said the lack of efficacy was the key reason for not recommending the drug.

“We have been looking at randomised controlled trials of hydroxychloroquine for the treatment of COVID-19 and there is now high-quality evidence that it has no effect,” Dr Elliott said.

When asked about a claim made in the Queensland MPs’ letter that the taskforce had relied heavily on a study since “discredited” and “debunked”, Dr Elliott said the group had no “specific concerns” in regards to the study.

“It was a very well conducted randomised controlled trial, which is the gold standard for understanding the potential efficacy of a drug treatment.”

He added that while Mr Kelly and Mr Christensen’s letter referred to earlier studies which had concluded hydroxychloroquine was ineffective but were later found to have been “in error”, the taskforce did not have concerns about the reporting of any of the randomised controlled trials incorporated into their findings.

Here is the ‘Fact’ Checker below ‘Assoc Professor Julian Elliott’

He has been working on HIV for 17 years still no vaccine eh! – Mick Raven

Our funders and partners Cochrane

And the smoking gun… – Mick Raven

Cochrane has been in official relations with the World Health Organization (WHO) since 2011. This collaboration includes the right to appoint a representative to participate, without vote, in WHO’s meetings, including at the World Health Assembly, the WHO’s decision-making body, allowing us to make expository statements on WHO health resolutions. This relationship gives us the opportunity to provide input on the way research evidence is identified, synthesized, assessed and used by WHO. In addition, we provide reliable summaries of health information which can be used to inform recommendations and policies. It promotes intersectoral collaboration and high-quality research between our two organizations to produce the necessary evidence to ensure policies in all sectors contribute to improving health and health equity. – https://www.cochrane.org/about-us/our-funders-and-partners

Do your research ppl while you still can – Mick Raven

Posted on October 23, 2020, in ConspiracyOz Posts. Bookmark the permalink. Leave a comment.