Not so Shaw – ConspiracyOz

Clip of George Bernard Shaw from ‘The Soviet Story ‘ Documentary 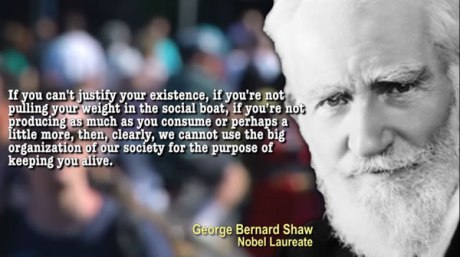 George Bernard Shaw is getting canceled

George Bernard Shaw (1856-1950) was the English-speaking world’s most famous leftist from roughly 1895-1935. As a celebrity, he was Tom Stoppard (the top highbrow playwright), Gore Vidal (the most famous interview wit), and David Bowie (the expert self-branding performance artist) rolled into one.

As a playwright, Shaw was long considered Shakespeare’s greatest successors, but 21st Century audiences are less enamored of him. Still, his Pygmalion was made into My Fair Lady. Whatever musical you want to argue is the greatest in the history of the West End/Broadway, you are going to have to come up with an argument for why it’s better than My Fair Lady.

(Interestingly, the 1956 opening night of My Fair Lady, the most famously successful in Broadway history, almost didn’t happen because star Rex Harrison, as Professor Henry Higgins, was suddenly overcome by the paralyzing realization that … he couldn’t sing. But eventually it was communicated to the star that nobody would care about his deficiencies as a singer because the world was about to fall in love with his unknown 20-year-old leading lady, Julie Andrews. So Harrison went out and rapped his way through his numbers and the rest is Broadway history.)

But Shaw was in the newspapers every week for roughly ever opining on the need to reform all aspects of society imaginable.

He was the genius of the Fabian Society that more or less invented the bourgeois side of the British Labour Party.

But he had lots and lots more opinions, on what to eat (vegetables), what to wear (while you shouldn’t eat sheep, you should wear woolen underwear at all times), and much else.

For example, his will left money to be devoted to the creation of a Shavian Alphabet to eliminate the problems of English spelling. (BLM activists often have problems with spelling, but you don’t see them calling for rationalized alphabets, now do you?)

But now even Shaw is getting canceled.

From the Sunday Telegraph:

telegraph.co.uk — Students at RADA have said George Bernard Shaw’s name should be removed from its theatre over his support of eugenics.

A recent biographer, Fintan O’Toole, argues that Shaw’s pro-eugenics polemics were so over the top that they were actually Swiftian satires.

Certainly not the students at the Royal Academy of the Dramatic Arts.

The call is included in an anti-racism action plan that also says received pronunciation should be “de-centred” from the curriculum. The Royal Academy of Dramatic Art should also consider dropping the performance of Restoration comedies due to their association with empire, the plan says.

And lets not forget…. – Mick Raven

In the name of science and the advancement of the human race, many prominent individuals sincerely called for government eugenics programs in the early 20th century. It was only after the horrors of the Holocaust were revealed to the world that talk of eugenics quickly subsided.

These quotes serve as a strong reminder of the dangerous places individuals will go in their thinking in the name of progress. The individuals pictured above are Carrie Buck and her mother. Carrie was forcibly sterilized after losing the U.S. Supreme Court case Buck v. Bell 1927.

“The aim of eugenics is to represent each class or sect by its best specimens; that done, to leave them to work out their common civilization in their own way.” – Francis Galton, Eugenics: Its Definition, Scope, and Aims, 1904

“The time has already come when each country needs a considered national policy about what size of population, whether larger or smaller than at present or the same, is most expedient. And having settled this policy, we must take steps to carry it into operation. The time may arrive a little later when the community as a whole must pay attention to the innate quality as well as to the mere numbers of its future members.”

“What we must fight for is freedom to breed the race without being hampered by the mass of irrelevant conditions implied in the institution of marriage. If our morality is attacked, we can carry the War into the enemy’s country by reminding the public that the real objection to breeding by marriage is that marriage places no restraint on debauchery as long as it is monogamic, whereas eugenic breeding would effectually protect the mothers and fathers of the race from any abuse of their relations.

As to the domestic and sympathetic function of marriage, or even its selfishly sexual function, we need not interfere with that. What we need is freedom for people who have never seen each other before, and never intend to see one another again, to produce children under certain definite public conditions, without loss of honor.

That freedom once secured, and the conditions defined, we have nothing further to say in the matter until the necessarily distant time when the results of our alternative method of recruiting will be able to take the matter in hand themselves, and invite the world to reconsider its institutions in the light of experiments, which must, of course, in the meantime run concurrently with the promiscuity of ordinary marriage.”

“The way of nature has always been to slay the hindmost, and there is still no other way, unless we can prevent those who would become the hindmost being born. It is in the sterilization of failures, and not in the selection of successes for breeding, that the possibility of an improvement of the human stock lies.”

“Every single case of inherited defect, every malformed child, every congenitally tainted human being brought into this world is of infinite importance to that poor individual; but it is of scarcely less importance to the rest of us and to all of our children who must pay in one way or another for these biological and racial mistakes.”

– Margaret Sanger, The Pivot of Civilization, 1922

“Society must concern itself not chiefly with the isolation, temporary or permanent, of the individual murderer, thief, or forger, but with the extermination or repair of the genetic, educational, or industrial defects which cause the production of criminals.”

“It is better for all the world, if instead of waiting to execute degenerate offspring for crime, or to let them starve for their imbecility, society can prevent those who are manifestly unfit from continuing their kind….Three generations of imbeciles are enough.”

Posted on September 20, 2020, in ConspiracyOz Posts. Bookmark the permalink. 1 Comment.