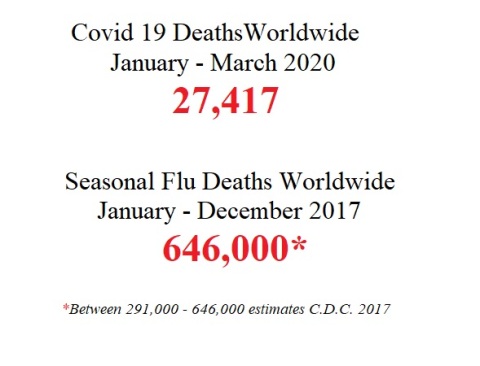 As many as 646,000 people may die from influenza each year worldwide, according to the latest estimates from the Centers for Disease Control and Prevention — a larger number than what other health experts have predicted in years past.

According to new estimates published today, between 291,000 and 646,000 people worldwide die from seasonal influenza-related respiratory illnesses each year, higher than a previous estimate of 250,000 to 500,000 and based on a robust, multinational survey.

Until recently, the World Health Organization (WHO) estimated the annual mortality burden of influenza to be 250 000 to 500 000 all-cause deaths globally; however, a 2017 study indicated a substantially higher mortality burden, at 290 000-650 000 influenza-associated deaths from respiratory causes alone

Posted on March 28, 2020, in ConspiracyOz Posts. Bookmark the permalink. 1 Comment.