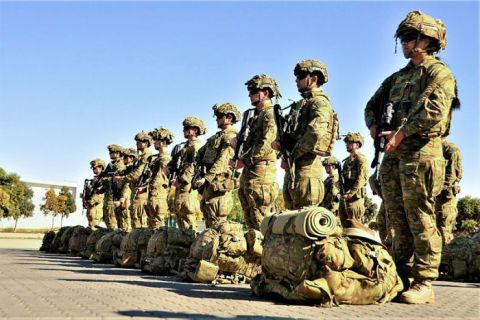 Soldiers in the Northern Territory and South Australia have become Australia’s first line of defence, ready to be deployed across the world.

Around 3,500 soldiers from the 1st Brigade, based predominantly at Darwin’s Robertson Barracks, have been certified as the Australian Army’s ‘ready’ brigade after months of intense preparation.

The responsibility of being the army’s ready group is rotated annually between combat brigades based in Townsville, Brisbane and Darwin.

“We currently have a contingent in the Middle East and right now on base here, there [are] troops preparing to go overseas,” 1st Brigade commander Brigadier Ashley Collingburn said.

“The army’s role is to prepare for war, so in addition to those operations we already know about, we’re also preparing for other contingencies.

“Everything from humanitarian assistance and disaster relief operations, through to high-end combat operations.”

The 1st Brigade, which is split across the Northern Territory and South Australia, will remain the ready brigade until October 2020, with soldiers on standby to be deployed at a moment’s notice.

“We are also preparing for the things that we don’t know about and as a combat brigade commander, I’m very aware that the world around us is changing,” Brigadier Collingburn said.

Photo: Brigadier Ashley Collingburn has almost 27 years experience as a soldier and has previously been posted to Darwin. (ABC News: Melissa Mackay)

Brigadier Collingburn said the Australian Army coined the term “accelerated warfare” to refer to changes around the globe, both politically and technically, that mean Australian soldiers need to adapt quickly.

“We like to say in the army that the ‘character of warfare is changing’,” Brigadier Collingburn said.

“Geopolitics, great power competition, new innovative technologies are changing the way we fight and of course demography, so population growth in some areas and ageing populations in other countries.”

Brigadier Collingburn said it is becoming increasingly important to prepare in more than the traditional ways, such as with land, air and sea, but also through cyberspace.

“Those types of things are changing the way we fight … we need to be able to adapt more quickly than we have in the past,” he said.

In Darwin, the 1st Brigade’s location puts it closer than any other battalion to some of Australia’s key defence partners, specifically in the Indo-Pacific region.

“Throughout the next 12 months, we will be partnering with many of those countries, conducting military exercises to ensure that we are ready for some of those challenges,” Brigadier Collingburn said.

Becoming the ready brigade is not the only change for 1st Brigade in 2020, with former commander, now Major General Matt Pearse handing the reigns to Brigadier Collingburn after a two-year posting.

With 27 years as a soldier under his belt, Brigadier Collingburn will return to Darwin after a four-year stint in Canberra.

“I’ve spent a lot of time in Darwin, over many postings, so in many ways it feels like I’ve come home, I really do love it up here,” he said.

Despite two manoeuvre units being relocated to RAAF Base Edinburgh in South Australia, Brigadier Collingburn said the Australian Defence Force had no plans to reduce its numbers in Darwin.

“The ADF remains totally committed to its presence in the Northern Territory, so I don’t see our footprint changing at all,” he said.

Posted on January 14, 2020, in ConspiracyOz Posts. Bookmark the permalink. 1 Comment.