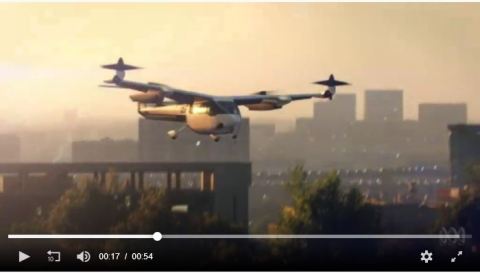 Uber’s plan to trial an aerial taxi service in Melbourne is technologically feasible but needs to be well regulated to avoid “absolute chaos”, according to a civil engineering expert.

The global ridesharing giant’s Uber Air pilot — which will also run in the US cities of Dallas and Los Angeles — aims to connect transport hubs like airports to central city sites.

The rideshare company said test flights were due to start from 2020 and plans were for commercial operations to begin from 2023.

Jake Whitehead, a University of Queensland researcher who specialises in transport, said the timeline was achievable from a technological perspective.

“We are very close to the point that battery technologies can support these kinds of smaller vehicles,” Dr Whitehead said.

“What will be the challenge is the regulation.

Dr Whitehead said Uber’s “extremely aggressive” approach to entering new markets in the past should prompt governments to think carefully about what regulations are needed to preserve liveability.

“The reality is there are some downsides to this technology if it’s a free-for-all and there are no rules in place.”

Photo: Uber also plans to offer flights in the US cities of Los Angeles and Dallas. (Supplied: Uber)

The announcement was made at Uber’s Elevate summit in Washington after the deal was sealed with Melbourne Airport and companies Macquarie Capital, Scentre Group and Telstra.

“This, coupled with Melbourne’s unique demographic and geospatial factors, and culture of innovation and technology, makes Melbourne the perfect third launch city for Uber Air.

“We will see other Australian cities following soon after.”

The rideshare company has been a disruptor to traditional taxi services in Australia and is currently facing a class action lawsuit from taxi drivers.

Some Australian Uber drivers have protested over their pay and conditions, most recently joining a global protest in May.

Ms Anderson said Victoria’s State Government had been “highly supportive” of the plans for the trial.

“Melbourne is one of the world’s most liveable cities and importantly it’s innovations like this that demonstrate that we’re at the leading edge of new technologies,” Treasurer Tim Pallas told the ABC.

The Civil Aviation Safety Authority (CASA) told ABC Radio Melbourne the authority would work with the company to ensure the service was safe before it started operating.

CASA spokesman Peter Gibson said the list of challenges for Uber was a long one:

The regional general manager of Uber Eats, Jodie Auster, conceded the days of pilotless flight were a long way off.

“There’s a lot of work to do. An urban ridesharing network in the sky does not happen overnight. It’s going to take some time,” she said.

Photo: Aerial ridesharing is being touted as a big part of future urban travel. (Supplied: Uber)

Trial to move away from ‘noisy, inefficient’ helicopters

A 2016 Uber Elevate paper described a network of small and electric aircraft that can take off and land vertically known as VTOL (vertical take-off and landing).

It proposed using sites like car parks roofs and existing helipads to run the service.

“The closest equivalent technology in use today is the helicopter,” the paper said.

“But helicopters are too noisy, inefficient, polluting and expensive for mass-scale use.”

Investigators created multiple false identities to launch a covert “sting” against Uber when it launched in Australia.

VTOLs would make use of “autonomy technology” to reduce the risk of operator error.

Uber is certainly not the only company racing to take over the skies.

Airbus is trialling its own air taxi service using a prototype electric aircraft, similar to a drone, which can take off and land vertically.

German company Volocopter is set to test its own drone-based vehicles in Singapore later this year.

It would not be the first time Uber has offered an air service in Melbourne.

Posted on June 13, 2019, in ConspiracyOz Posts. Bookmark the permalink. 1 Comment.