← On YouTube, fans punish stars by making a sport of unsubscribing
Its Just A Flesh Wound, London? – ConspiracyOz → 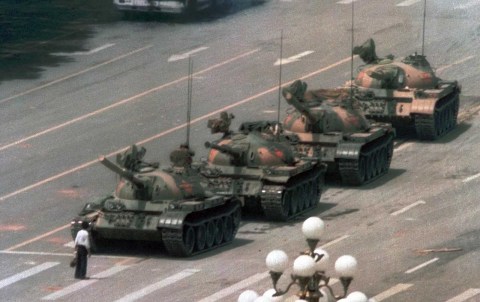 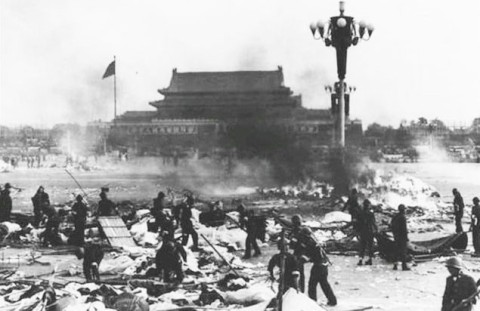 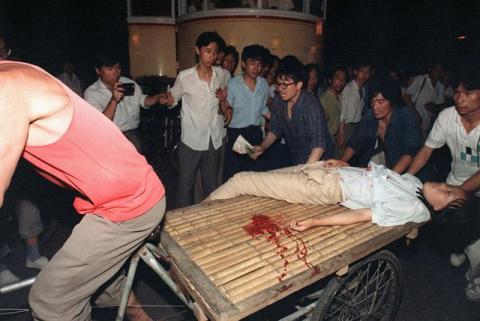 A former People’s Liberation Army journalist defied a political taboo to describe the bloody crackdown in Beijing and urge a national reckoning. 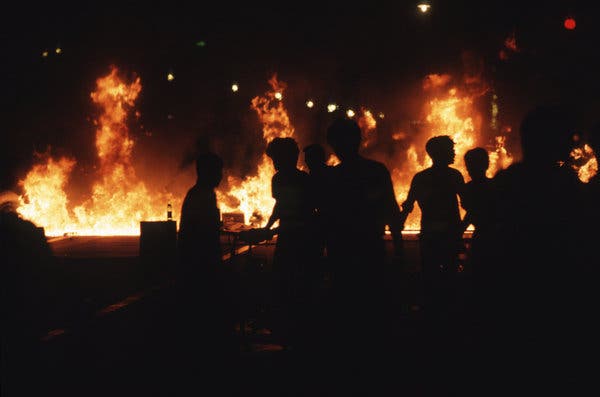 Vehicles on fire on the night of the crackdown in Tiananmen Square in Beijing on June 4, 1989.CreditCreditPeter Charlesworth/LightRocket, via Getty Images

BEIJING — For three decades, Jiang Lin kept quiet about the carnage she had seen on the night when the Chinese Army rolled through Beijing to crush student protests in Tiananmen Square. But the memories tormented her — of soldiers firing into crowds in the dark, bodies slumped in pools of blood and the thud of clubs when troops bludgeoned her to the ground near the square.

Ms. Jiang was a lieutenant in the People’s Liberation Army back then, with a firsthand view of both the massacre and a failed attempt by senior commanders to dissuade China’s leaders from using military force to crush the pro-democracy protests. Afterward, as the authorities sent protesters to prison and wiped out memories of the killing, she said nothing, but her conscience ate at her.

Now, in the run-up to the 30th anniversary of the June 4, 1989, crackdown, Ms. Jiang, 66, has decided for the first time to tell her story. She said she felt compelled to call for a public reckoning because generations of Chinese Communist Party leaders, including President Xi Jinping, have expressed no remorse for the violence. Ms. Jiang left China this week.

“The pain has eaten at me for 30 years,” she said in an interview in Beijing. “Everyone who took part must speak up about what they know happened. That’s our duty to the dead, the survivors and the children of the future.”

Ms. Jiang’s account has a wider significance: She sheds new light on how military commanders tried to resist orders to use armed force to clear protesters from the square they had taken over for seven weeks, captivating the world.

The students’ impassioned idealism, hunger strikes, rebukes of officials and grandiose gestures like building a “Goddess of Democracy” on the square drew an outpouring of public sympathy and left leaders divided on how to respond. 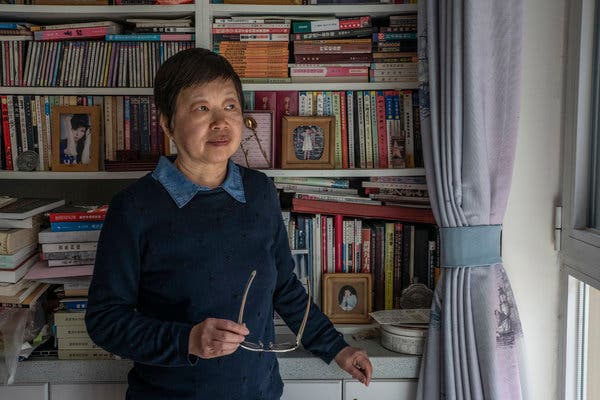 She described her role in spreading word of a letter from senior generals opposing martial law, and gave details of other letters from commanders who warned the leadership not to use troops in Beijing. And she saw on the streets how soldiers who carried out the party’s orders shot indiscriminately as they rushed to retake Tiananmen Square.

Even after 30 years, the massacre remains one of the most delicate topics in Chinese politics, subjected to a sustained and largely successful effort by the authorities to erase it from history. The party has ignored repeated calls to acknowledge that it was wrong to open fire on the students and residents, and resisted demands for a full accounting of how many died.

The authorities regularly detain former protest leaders and the parents of students and residents killed in the crackdown. A court convicted four men in southwestern China this year for selling bottles of liquor that referred to the Tiananmen crackdown.

Over the years, a small group of Chinese historians, writers, photographers and artists have tried to chronicle the chapters in Chinese history that the party wants forgotten.

But Ms. Jiang’s decision to challenge the silence carries an extra political charge because she is not only an army veteran but also the daughter of the military elite. Her father was a general, and she was born and raised in military compounds. She proudly enlisted in the People’s Liberation Army about 50 years ago, and in photos from her time as a military journalist, she stands beaming in her green army uniform, a notebook in hand and camera hanging from her neck.

She never imagined that the army would turn its guns against unarmed people in Beijing, Ms. Jiang said. 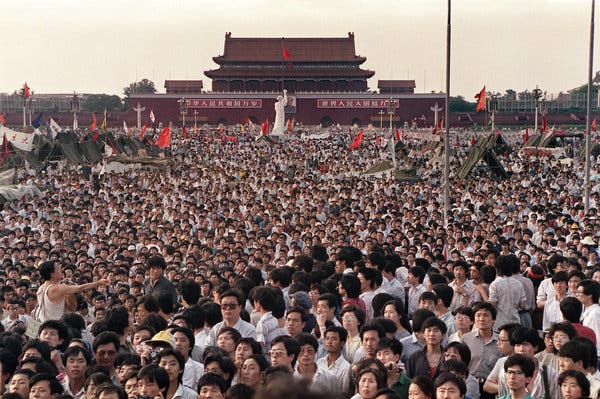 “How could fate suddenly turn so that you could use tanks and machine guns against ordinary people?” she said. “To me, it was madness.”

Qian Gang, her former supervisor at the Liberation Army Daily, who now lives abroad, corroborated details of Ms. Jiang’s account. Ms. Jiang shared hundreds of yellowing pages of a memoir and diaries that she wrote while trying to make sense of the slaughter.

“More than once I’ve daydreamed of visiting Tiananmen wearing mourning clothes and leaving a bunch of pure white lilies,” she wrote in 1990.

Ms. Jiang felt a stab of fear in May 1989 when radio and television news crackled with an announcement that China’s government would impose martial law on much of Beijing in an effort to clear student protesters from Tiananmen Square.

The protests had broken out in April, when students marched to mourn the sudden death of Hu Yaobang, a popular reformist leader, and demand cleaner, more open government.

By declaring martial law across urban Beijing, Deng Xiaoping, the party’s leader, signaled that armed force was an option.

Subscribe for original insights, commentary and discussions on the major news stories of the week, from columnists Max Fisher and Amanda Taub. 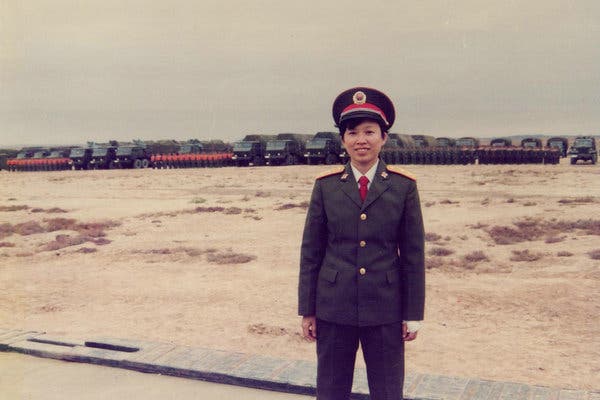 Jiang Lin during a military training exercise in the Ningxia region of China in October 1988.

Researchers have previously shown that several senior commanders resisted using military force against the protesters, but Ms. Jiang gave new details on the extent of the resistance inside the military and how officers tried to push back against the orders.

Gen. Xu Qinxian, the leader of the formidable 38th Group Army, refused to lead his troops into Beijing without clear written orders, and checked himself into a hospital. Seven commanders signed a letter opposing martial law that they submitted to the Central Military Commission that oversaw the military.

“It was a very simple message,” she said, describing the letter. “The People’s Liberation Army is the people’s military and it should not enter the city or fire on civilians.”

Ms. Jiang, eager to spread the word of the generals’ letter, read it over the telephone to an editor at People’s Daily, the Communist Party’s main newspaper, where the staff were disobeying orders to censor news about the protests. But the paper did not print the letter because one of the generals who signed it objected, saying it was not meant to be made public, she said.

Ms. Jiang still hoped that the rumblings inside the military would deter Deng from sending in soldiers to clear the protesters. But on June 3, she heard that the troops were advancing from the west of the city and shooting at people.

The army had orders to clear the square by early on June 4, using any means. Announcements went out warning residents to stay inside. 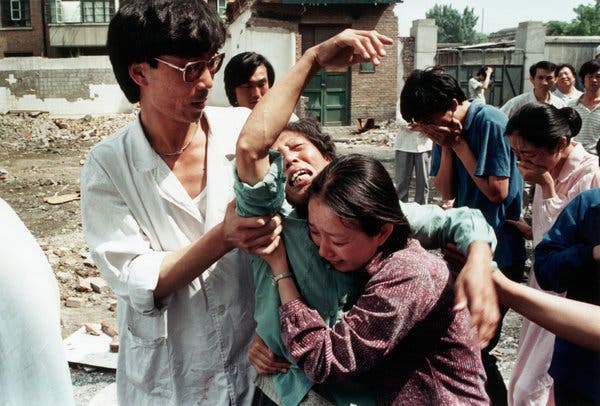 Family members trying to comfort a woman who had just learned of the death of her son, a student protester killed by soldiers in the Tiananmen massacre.CreditDavid Turnley/Corbis, via Getty Images

‘Any Lie Is Possible’

But Ms. Jiang did not stay inside.

She remembered the people she had seen on the square earlier in the day. “Would they be killed?” she thought.

She headed into the city on bicycle to watch the troops come in, knowing that the confrontation represented a watershed in Chinese history. She knew she risked being mistaken for a protester because she was dressed in civilian clothes. But that night, she said, she did not want to be identified with the military.

“This was my responsibility,” she said. “My job was to report major breaking news.”

Ms. Jiang followed soldiers and tanks as they advanced into the heart of Beijing, bursting through makeshift blockades formed with buses and firing wildly at crowds of residents furious that their government was using armed force.

Ms. Jiang stayed close to the ground, her heart pounding as bullets flew overhead. Bursts of gunfire and blasts from exploding gasoline tanks shook the air, and heat from burning buses stung her face.

Near midnight, Ms. Jiang approached Tiananmen Square, where soldiers stood silhouetted against the glow of fires. An elderly gatekeeper begged her not to go on, but Ms. Jiang said she wanted to see what would happen. Suddenly, over a dozen armed police officers bore down on her, and some beat her with electric prods. Blood gushed from her head, and Ms. Jiang fell.

Still, she did not pull out the card that identified her as a military journalist.

“I’m not a member of the Liberation Army today,” she thought to herself. “I’m one of the ordinary civilians.” 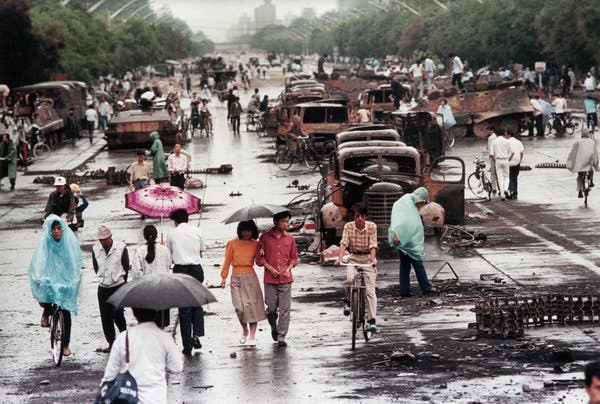 Chang’an Avenue beside Tiananmen Square the day after the carnage. Scattered throughout the street are burned remnants of military vehicles destroyed by angry civilians.CreditDavid Turnley/Corbis, via Getty Images

A young man propped her on his bicycle to carry her away, and some foreign journalists rushed her to a nearby hospital, Ms. Jiang said. A doctor stitched up her head wound. She watched, dazed, as the dead and wounded arrived by dozens.

The brutality of that night left her shellshocked.

“It felt like watching my own mother being raped,” she said. “It was unbearable.”

Ms. Jiang has long hesitated to tell her story. The head injury she suffered in 1989 left her with a scar and recurring headaches.

She was interrogated in the months after the 1989 crackdown, and detained and investigated twice in following years over the private memoir that she wrote. She formally left the military in 1996 and has since lived a quiet life, largely ignored by the authorities.

In recalling the events over several interviews in recent weeks, Ms. Jiang’s voice often slowed and her sunny personality seemed to retreat under the shadow of her memories.

Over the years, she said, she waited for a Chinese leader to come forward to tell the country that the armed crackdown was a calamitous error.

But that day never came.

Ms. Jiang said she believed that China’s stability and prosperity would be fragile as long as the party did not atone for the bloodshed.

“All this is built on sand. There’s no solid foundation,” she said. “If you can deny that people were killed, any lie is possible.”

A version of this article appears in print on May 29, 2019, on Page A1 of the New York edition with the headline: ‘It Was Unbearable’: Witnessing Carnage in Tiananmen Square.

Posted on May 30, 2019, in ConspiracyOz Posts. Bookmark the permalink. 2 Comments.

← On YouTube, fans punish stars by making a sport of unsubscribing
Its Just A Flesh Wound, London? – ConspiracyOz →