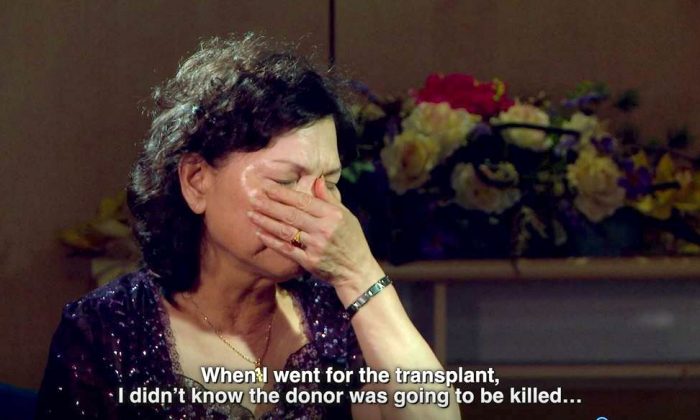 China’s organ transplant industry grew exponentially in the early 2000s and today, China is the go-to country for transplant tourists from around the world. Despite the fact that organ donation is minimal in China, organs are plentiful, and the wait-times range between a few days and two months—something out of the question in any other country.

An Unprecedented Crime: State-Directed Mass Killing of Prisoners of Conscience in China for Their Organs
Chinese Doctors Admit to Forced Organ Harvesting of Falun Dafa Adherents in Phone Calls

Realizing that this could only be the result of forced organ harvesting, Dr. Lavee spearheaded the crafting of Israel’s Organ Transplant Law which came into effect in 2008, essentially banning the purchase and sale of human organs.

The move has had a significant impact in reducing transplant tourism from Israel, according to a study published in the American Journal of Transplantation in December 2012.Similar legislation is in the works in Canada; the private member’s bill S-240 to combat organ trafficking was unanimously passed by the Foreign Affairs Committee on Feb. 27 and will proceed for a final reading in the House of Commons.

A report by Organs Watch, an organization based at the University of California, identified transplant tourists from Canada as among the top organ-buyers in the world.

Dr. Jeff Zaltzman, the head of renal transplants at St. Michael’s Hospital in Toronto, has said that at least 50 of his patients have gone to China for transplants. Zaltzman said at a 2014 forum on forced organ removal that what is happening in China has created a third kind of donor that is not found in developed countries like Canada. He calls them “living dead donors.”

“They are living and then they become dead. So that is a unique term to the Chinese situation,” he said.

“Killing to Live: The Dark Side of Transplant Tourism in China,” a 2017 documentary aired by Korea’s Chosen TV, reveals that an estimated 3,000 Koreans a year have received organs in China since 2000.

The documentary is about an investigation of the organ transplant centre at Tianjin First Central Hospital in China. The hospital guaranteed organs from “healthy, young donors” on demand.

The hospital, which has 500 transplant beds, has three floors dedicated to international transplant patients and the operating room functions around the clock, 24 hours a day.

“In China, the organs come easy. I don’t know where they come from. It takes just two hours for them to bring the fresh organs here,” a senior nurse told the filmmakers, adding that a liver costs US$130,000.

Patients from other countries go to China for organs as well. The website of the Zhongshan Hospital in Shanghai states that the hospital has attracted patients from more than 10 countries and regions, including the United States, United Kingdom, Japan, Canada, South Korea, Hong Kong, Macau, and Taiwan.

They released two investigative reports, one in 2006 and one in 2016, showing that non-consenting religious and political prisoners—primarily Falun Dafa adherents detained for their beliefs—are being subjected to forced organ harvesting while alive. In other words, they are being killed for their organs.

‘I didn’t know the donor was going to be killed’

Titled “Bloody Harvest / The Slaughter: An Update” and also co-authored by American researcher Ethan Gutmann, the report detailed some of the cases of transplant tourism to China.

Many go in groups, organized by a broker. In February 2001, a group of nine patients travelled from Southeast Asia to Taiping Hospital for organ transplants. The nine transplants were finished in two days, along with four others.

Meanwhile, some transplant recipients who discovered after the fact that the “donor” died during the organ extraction process now have to live with that disturbing knowledge.

“I was astonished to hear about the source of the organs. I felt very sad that I participated in such thing. I want to tell my story so that people can know about it,” said Taiwanese resident Rourou Zhuang in the documentary “Human Harvest.” She received a new kidney in China.

“When I went for the transplant, I didn’t know the donor was going to be killed,” said Xiusong Tu as she wept.

Japanese patient Hokamura Kenichiro was astonished at how easy it was to get a transplant. Ten days after contacting a Japanese broker in China, he was lying on an operating table in a Shanghai hospital receiving a new kidney. A doctor had only examined him that morning. “It was so fast I was scared,” he said. The price of the organ was US$80,000.

Hokamura is one of hundreds of well-off Japanese who have made the trip to China for kidney, liver, or heart transplants, the 2016 report said.

Falun Dafa, or Falun Gong, is a traditional spiritual practice that had an estimated 70-100 million adherents by the late in the 1990s. Fearful of its immense popularity, then-Chinese Communist Party leader Jiang Zemin initiated a campaign of persecution against its adherents in July 1999 that continues today.

The researchers found that while transplant abuse exists in many countries, the difference in China is that it’s sanctioned by the state and the state is profiting from it.

At a forum on forced organ removal at Toronto General Hospital on Oct. 29, 2014, where the dilemma of transplant tourism was discussed, Dr. Zaltzman described a patient of his who had gone to China for a transplant.

“I had one young man who had two scars. The first kidney that was transplanted in China didn’t work, and within a few days, he already had a second transplant. That would never happen in Canada,” he said.

While some doctors are aware their patients could be the impetus for murder in China, they don’t know what they can do about it.

Some countries, including Spain, Taiwan, Italy, and Israel, have passed legislation aimed at preventing their citizens from travelling abroad for transplants.

Similar legislation is currently making its way through the House of Commons. Bill S-240, which passed unanimously in the Senate last October, would make it a criminal offence in Canada to receive an organ abroad without consent from the donor, and it would also make people involved in forced organ harvesting anywhere in the world inadmissible to Canada.

Speaking to the Standing Committee on Foreign Affairs and International Development on Feb. 26, Matas said such legislation can be very effective.

“In Taiwan and Israel, it’s been dramatic. The problem in both countries was transplant tourism to China,” he told the committee via telephone.

“After the Israel legislation was passed, it went from being very common to disappearing altogether, or almost altogether. … Now that [Taiwan has] legislation, it has had a sharp downturn on transplant tourism to China. So the legislation in those two countries has practically been very impactful.”

Zaltzman said if Canada’s legislation were to pass, he would support that as a way to help address the dilemma faced by doctors. “That would be a big step forward,” he said.

Posted on May 14, 2019, in ConspiracyOz Posts. Bookmark the permalink. Leave a comment.