The Death of Print Media – ConspiracyOz 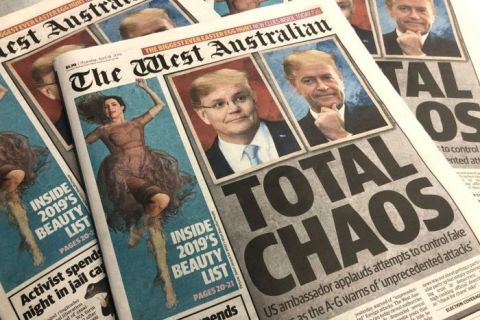 The loss of decades of journalism experience and knowledge from the latest round of redundancies at The West Australian newspaper will “denude” its newsroom, diminishing its ability to cover state issues and hold power to account, according to a veteran editor.

Managing editor and owner of Post Newspapers Bret Christian was joined by government ministers and media academics in expressing concern at the loss of around 30 journalists from WA’s major newspaper.

Among those to accept voluntary redundancies are high-profile state political editor Gary Adshead, named the West Australian journalist of the year at the 2018 WA Media Awards, and health editor Cathy O’Leary, who was recognised at the awards for her outstanding contribution to journalism over more than 30 years.

Last month, the paper’s editor Anthony De Ceglie — who took the job in January — called for voluntary redundancies to deal with “excess capability” ahead of the integration of newsrooms at the West, the Sunday Times and website Perth Now.

The West and the Sunday Times are also moving to a seven-day-a-week newsroom, with staff working to both mastheads.

It is the third major round of redundancies at The West Australian since 2016 when at least 35 senior editorial staff left following the acquisition of the Sunday Times by the paper’s parent company Seven West Media.

Another round of redundancies came in January last year in the face of what chief executive John Driscoll called “the challenges our industry is facing”.

The ABC has been told the long list of reporters, sub-editors and photographers now heading out the door are leaving for a mix of reasons.

Some were keen to take good payouts before their enterprise bargaining agreement is renegotiated, and others were not comfortable with the paper’s more tabloid direction since De Ceglie took over.

Photo: The West Australian’s editor Anthony De Ceglie says the show will go on, despite the loss of at least 30 staff. (ABC News: Liam Phillips)

Kerry Stokes, chairman of SevenWest Media, which owns the papers, sat in on the news conference yesterday at the Osborne Park headquarters.

De Ceglie did not return the ABC’s calls but told radio station 6PR despite the trauma involved in saying goodbye to long-serving staff, “the show goes on”.

There was a concern, though, among some at the paper at the extent of corporate memory being lost among senior reporters with a deep understanding of Perth and who to talk to.

‘The paper will suffer’

Christian said it was a blow to the West’s ability to sort truth from fiction.

“It can only diminish their ability to cover Perth and Western Australia,” he said.

“People expect them to cover the issues that affect the state and you just cannot do it with a denuded newsroom.

Photo: Bret Christian says the paper will struggle to hold those in power to account without experienced reporters. (ABC News: Emma Wynne)

“They know where the bodies are buried and it’s inevitable the paper will suffer as a result.

“The journalist’s job is to keep power to account and a handful of journalists can’t do that effectively when you’re up against the huge machine of government and business and public relations.”

“Broadly, you can already see the high content of infotainment that is evident in our news supply in the West,” Dr Fernandez said.

“It’s already a sign that people who are award winners, very accomplished at investigative journalism, it’s not really the kind of thing we can afford to lose.”

In 2017, Adshead broke the story of former Labor MP Barry Urban’s fake overseas police service medal, which forced him to quit Parliament and prompted a by-election in his seat, which the McGowan Government lost.

But at the top levels of Government, there is a concern at the exodus of journalists like Adshead with long corporate knowledge of state political issues.

“Our democratic system relies upon a strong and free media to make sure that we have an opportunity to get our message out and that we’re all held to account,” Mr Cook said.

“We hope that this doesn’t represent a diminishing of the role of the media in our democratic lives.”

“While politicians and journalists don’t always agree, and politicians don’t always like what’s written about us, it’s actually a critical part of our democracy and it’s disappointing to hear we’re losing more positions,” Ms Ellery said.

The West and Perth Now websites are due to go behind a paywall in June.

Posted on May 2, 2019, in ConspiracyOz Posts. Bookmark the permalink. 1 Comment.