← China Tracks its Citizens, Now the U.S. will as Well – ConspiracyOz
21st Century Mark of the Beast Bar Code is Here – ConspiracyOz →

Can Any Federal Budget Fix This? – ConspiracyOz 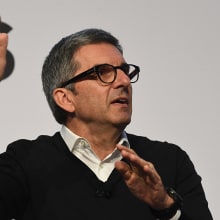 Daniel Petre says the transition to an AI could be devastating. Peter Braig
Microsoft Australia managing director Steven Worrall and Telstra executive Michael Ebeid warn that business,
governments and workers are woefully unprepared for robots to displace up to 6.5 million jobs.

The pair join tech heavyweights such as Atlassian’s Mike Cannon-Brookes and venture capitalist Daniel Petre who warn “we need to act now”, ahead of a major conference kicking off on Monday to urge action.

“If we do not get this transition right it will be devastating to the standard of living for many Australians,” Mr Petre told The Australian Financial Review.

The co-founder of AirTree Ventures and friend to Bill Gates worked with others including Catherine Livingstone on a landmark McKinsey report released this month. It warns that up to 46 per cent of existing work activities could be automated in Australia by 2030, displacing between 3.5 million and 6.5 million full-time jobs.

Microsoft’s latest research to be released on Monday supports findings that business and workers are more at risk because we lag other nations – 46 per cent are yet to implement any AI.

“The lack of urgency in implementing training plans to help people acquire the necessary skills to succeed in an AI-enabled world creates some cause for concern,” Microsoft’s Mr Worrall said.

The tech giant found a lack of skills and resources as well as a failure in leadership, were the key barriers to acting.

“I don’t think the community have yet hit a tipping point where they have seen enough examples to really understand what we are talking about,” said Mr Worrall, who argues AI doesn’t mean whole jobs will necessarily be wiped out.

“If I’m a research scientist working for Northern Territory Fisheries, I am now using AI to speed up my job, so that instead of spending hours looking at video footage, AI technology delivers outcomes to me.”

“Or I work at Downer and manage the train network so instead of having my team spending hours analysing reports, I have an AI system with 30,000 inputs every ten minutes to help me make better decisions about maintenance cycles,” he said.

The McKinsey report warns that the retail industry will be the worst hit but also predicts a net gain in jobs by 2030.

Government, administrative support, transport and warehousing are also among those sectors expected to be worst off.

Co-author of the McKinsey report Seckin Ungur said the worst response is to think “the robots are coming and stick our heads in the sand”.

“The debate seems to be the robots are coming and they are going to take our jobs, this is a bad thing ‘how do we slow it down?’ but it is inevitable. If you slow it down you are only slowing down your ability to adapt and be more competitive to get those new jobs,” she said.

“Workers still think as automation as something that won’t happen to me, as something which hit factory workers but they don’t realise this new wave of automation is hitting all sectors and levels in almost every job, including white collar workers like accountants and legal clerks.”

Ms Ungur is moderating a panel on the topic with CEDA CEO Melinda Cilento and Deakin vice-chancellor Jane den Hollander at the Creative Innovation conference in Melbourne from Monday which also features David Gonski, Alan Finkel and Lord Adair Turner.

Posted on April 3, 2019, in ConspiracyOz Posts. Bookmark the permalink. 1 Comment.

← China Tracks its Citizens, Now the U.S. will as Well – ConspiracyOz
21st Century Mark of the Beast Bar Code is Here – ConspiracyOz →