← What Search Engines Really Provide a “Private” Browsing Experience?
Foreign ownership of water entitlements reveals China and US are the biggest investors →

Photo: Corinne and Dave Merrigan have had to tighten their spending in order to manage their growing energy bill. (ABC News: Chris Gillett)
Related Story: Why does SA pay more for power?
Related Story: AGL full year profit almost trebles on higher electricity prices
Related Story: Yes, your energy bills are too high. Here’s how the ACCC thinks prices can be slashed

Some of the nation’s biggest energy companies have allegedly used the closure of Australia’s dirtiest coal-fired power station to price gouge customers and make an extra $3 billion in wholesale profits, according to a new report.

The Victoria University research, obtained exclusively by 7.30, reveals that price rises filled the coffers of Australia’s energy giants with an extra $3 billion in revenue after the shuttering of the Hazelwood power plant in Victoria.

When the closure of Hazelwood was announced just a few months earlier, AGL increased the price of much of the coal-fired power on offer from the Bayswater and Liddell plants in NSW.

The study found a significant part of the output from the Liddell plant was repriced from $40 to $60 per megawatt hour, to greater than $5,000 per megawatt hour — so expensive it effectively restricted supply.

AGL’s competitors, Energy Australia and Origin, hiked the prices of their coal-fired power too.

Bruce Mountain, the lead researcher and director of the Victoria Energy Policy Centre, said the price increases flowed through to consumers, and the effects were still being felt.

“[Consumers] are paying roughly $200 more than they should and that’s ongoing,” he said.

“Hazelwood should not have had such a large impact on the market. It was about 5 per cent of the national coal generation market, it was not a big deal. It should have been handled easily.

“This is an industry that ultimately has gouged its customers.”

But Australia’s biggest energy companies — Energy Australia and Origin Energy — maintain they have not gouged customers following the closure of Hazelwood.

AGL said regulators had not accused it of behaviour that was harmful to the market.

‘How am I using this much power?’

The extra cost of energy has been particularly painful for Corinne and Dave Merrigan and their three children, who live south-east of Melbourne.

Power is their biggest expense and Ms Merrigan said it had put unrelenting pressure on her husband to find extra work as she studies to be a nurse.

Photo: Corinne Merrigan is worried about how her children will manage the cost of living as they grow up. (ABC News)

“The last few quarters I’ve opened the power bill, my stomach has literally gone up because I thought, ‘Oh my goodness, how am I using this much power?’,” she said.

“On paper we are earning a good amount of money but once you pay the bills, if Dave wasn’t working his second and third jobs, we probably wouldn’t be making it.”

The Merrigans currently pre-pay $100 a fortnight to their power company, Energy Australia, to take the sting out of their bill.

How to save on your power bill

Power bills are expensive. Really expensive. So here are some tried and tested methods to help you save.

But the family’s power costs have also affected their standard of living.

“We definitely shop around now every week, we try and … eat a lot more meals with mince in them and sausages and the cheaper meat,” she said.

Ms Merrigan is furious with the big three energy companies.

“It’s absolutely ridiculous that we are copping these price increases so regularly,” she said.

“Families like us are barely making it week to week and here they are making ridiculous amounts of profit.”

Dr Mountain said Australian households were “paying amongst the highest prices for electricity of any country in the world”.

“What we’ve found raises very profound questions for the design and operation and oversight of the market,” he said.

“I think the failure is so significant that it justifies a serious rethink, a no-holds-barred serious, independent rethink of this electricity market.”

Dr Mountain’s research focused on when coal generators like AGL set the going rate on the wholesale spot market.

This market is used by generators to sell their electricity to meet demand.

Dr Mountain’s research shows that, following the announcement of the Hazelwood closure, AGL dramatically increased the price of the electricity it offered for sale.

By doing this, AGL increased its profits in this market by 60 per cent and passed on most of these increases to customers.

The other major power generators, including Origin and Energy Australia, also increased the price of their coal-fired power.

“AGL produces around a third, a bit under a third of all the coal-fired electricity that’s actually produced. They’re the biggest producer and server of customers by far in the market. 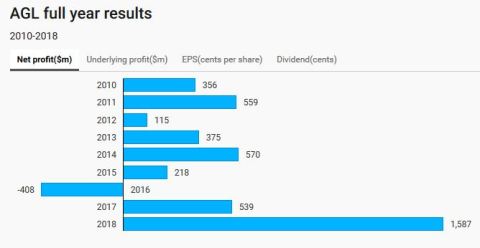 “It’s certainly contrary to the policy intent of a market where competition is meant to bring about better outcomes for the customers.”

AGL chief executive Brett Redman has acknowledged the company benefited from higher prices after the closure of Hazelwood, but described it as the “supply, demand dynamic”.

He said that as a major player in the energy market, AGL has a responsibility to be a good participant, and does everything it can to moderate price increases.

“When people talk about price gouging, what they’re really talking about is price going up, so price definitely went up following the closure of Hazelwood,” he said.

“Typical of any market — whether it’s coal, gas, oil, gold, you name it — when a large amount of supply is withdrawn from the market, the market reacts by pushing the price up.

“I think all participants saw price go up following the announcement of the closure of Hazelwood.

“When a closure is announced the market starts to price in that change.

“All participants would have been participating in that change or price, anticipating the change in supply and demand.”

After reviewing Dr Mountain’s research, AGL released a statement, saying the company has supported the regular and lengthy regulatory reviews of the market, and it supplied information to the Australian Energy Regulator when it looked at wholesale price increases in 2017.

AGL said neither the AER nor the ACCC “has accused AGL of misusing market power, or behaving in a way that’s within the rules but harmful to the market”.

“Take out a big generator with no replacement, you make supply and demand very tight and it doesn’t matter what your market structure is, you have no time to react and you get an energy price shock.

“I think the market did everything it could to replace that energy as cheaply as possible but there was no source of cheap energy available in the timeframe.”

Origin Energy’s executive general manger of retail, Jon Briskin, also said his company did not gouge its customers following the closure of Hazelwood.

“In fact, there’s been very forensic reviews by both the ACCC as well as the Grattan Institute and it found no evidence from Origin or the tier one retailers,” Mr Briskin said.

“Origin has increased supply after Hazelwood closed by over 20 per cent,” he said.

The nation’s power watchdog, the Australian Energy Regulator, investigated the price rises at the time, but did not have the power to speak directly to the big energy companies, or gain timely insights into the energy contracts market.

The Australian Energy Regulator said that in the short period of time it had to conduct its review, it did not find any evidence that power companies were abusing their market share to increase prices.

The Australian Competition and Consumer Commission also examined the price rises, according to its chairman Rod Sims.

Photo: Rod Sims, from the Australian Competition and Consumer Commission, says ripping people off is not illegal. (ABC News)

But Mr Sims said the price rises were the result of market power.

“We don’t think there was a breach of the law, we think this was the exercise of market power that should never have existed in the first place,” he said.

“Unquestionably power prices in Australia are too high. Consumers, whether their households or business, are clearly paying more for electricity than they should be.”

But Dr Mountain said the Australian Energy Regulator, which oversees electricity markets, could have done more.

“I think there’s more the [Australian Energy Regulator] could do to understand the nature of market power in wholesale markets. They’ve been reticent about calling it the way it is,” he said.

“I think in many settings, the Australian Energy Regulator needs to deal with the same market participants again and again.

“They’re very influential in pressing their interests and I think a bit of distance might help in bringing clarity to this important issue.”

Danny Price, a leading energy economist and the managing director of Frontier Economics, has warned that Australia is “undoubtedly in the midst of an energy crisis”.

He agreed that Australians were paying too much for electricity, but raised his own concerns about the stability of the energy grid.

“Politicians are trying to make out it’s all under control. It’s not under control. Things are getting worse. We’ve just been through a very bad summer in Victoria and NSW,” he said.

“All the predictions by the Australian energy market operator that we’d get through unscathed didn’t come true.

“In fact next summer, we can expect a lot worse. Nothing will get better.”

Mr Price has blamed political intervention for the dysfunction of the energy market.

“The reason why we’re in with such high prices is because of very bad policy decisions, bad regulatory decisions. And that’s set to get worse, not better,” he said.

He said it was having a detrimental effect on future investment.

“Outside investors, those overseas, are genuinely shocked at what they are witnessing in Australia. Many are actually looking to exit the market,” Mr Price said.

“It’s the question I get most in any other country I visit is, ‘What’s happened in Australia?’

“Why the political interference?”

Posted on March 26, 2019, in ConspiracyOz Posts. Bookmark the permalink. Leave a comment.

← What Search Engines Really Provide a “Private” Browsing Experience?
Foreign ownership of water entitlements reveals China and US are the biggest investors →