The Beginning of the Forbin Project?… Google to Control Everything? – ConspiracyOz

Google says it plans to launch a streaming platform called Stadia in a bid to revolutionise the multi-billion-dollar video game industry.

Stadia will be a cloud-based service that will allow users to play games across devices operating on Google’s Chrome browser and Chrome OS, such as Pixel phones and Chromebooks.

This will mean anyone with a mobile or a smart-TV will be able to play a game any time, anywhere.

Alphabet, the parent company of Google, says playing video games will be as simple as pressing a ‘Play Now’ button, without having to download a game.

YouTube, another platform owned by Alphabet, will also host the button.

Traditionally, most video games have been limited to a console box, such as a Nintendo device, a PlayStation, or Xbox, but in recent years this has moved to streaming contexts — similar to music on Spotify and films and TV via Netflix.

Google’s vice president and general manager Phil Harrison — who has previously held leading positions at Microsoft’s Xbox and Sony’s games divison — told delegates at the 2019 Game Developers Conference that the “future of gaming is not a box”.

“Our vision for Stadia is simple: One place for all the ways we play,”

He explained that future Stadia users will be able to use the devices that they have to join the platform, though they have released an optional Stadia controller powered by Wi-Fi.

“With Stadia the data centre is your platform,”

“There is no console that limits where gamers can play,” he said.

Google says Stadia will be faster than top-two competitors combined

“As a developer, you’re used to being forced to tone down your creative ambition that are limited by the hardware,”

“But our vision with Stadia is that the processing resources will scale up to match your imagination,” he said. 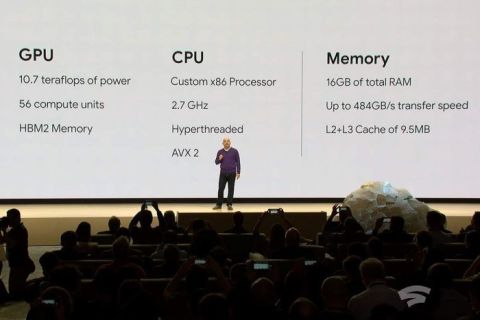 In gaming, this is used to denote the computations that draw polygons on screen which are then moved around, which gives users the feeling of being able to freely move around a virtual ‘world’.

Mr Bakar said that Stadia would rely on an array of other technological partners to grow the system.

“With this suite of tools, game development can evolve as quickly as the imagination of content creators,” he said.

But others have questioned Stadia’s practicality

YouTube: Google wants Stadia to bring gamers to “one place” for all video-games.

“It is not necessarily at this point the easiest thing for people to livestream their games and now you can do it with the push of a button,”

“What they’ve done with Stadia is to connect and unify both the gaming platform and the streaming platform which obviously is new,” he said.

BTIG managing director Brandon Ross explained that Google’s platform could set up a distribution battle between Microsoft, which owns the Xbox, Sony, which owns the PlayStation, Google and perhaps Amazon, which reportedly is working on its own video game service, as they race to lock down distribution of the most in-demand games.

He said Stadia will be a positive for game publishers “assuming that it works and works at scale, which is a big assumption.”

“What they’re presenting is a feasible way to play videogames in the cloud, and utilising the cloud so you can play anytime, anyplace and anywhere.

“There’s no friction, including the friction of upfront hardware costs,” he said.

Since the launch, others have pointed out Google’s lack of clarity over Stadia, as they have not released costs or the required internet access speeds, and some conference attendees reported noticeable lag during gameplay.

No launch date or pricing was announced but the company says Stadia will be available in 2019 in the US, Canada, the UK and parts of Europe.

Photo: Historically, most video-games have been powered by consoles purchased by individual users. (Supplied: Leonard Joel)

Posted on March 21, 2019, in ConspiracyOz Posts. Bookmark the permalink. 1 Comment.