Brenton Tarrant, the man charged in relation to the Christchurch massacre appears in the dock 16th March 2019 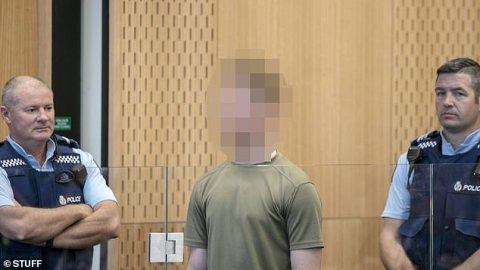 An 18-year-old New Zealand man accused of Facebook sharing a live-stream video of the Christchurch massacre that killed 50 people has been denied bail.

Police have said the teenager – who cannot yet be named – was not involved in the attack on two mosques.

Australian white supremacist Brenton Tarrant, 28, has been charged with the Friday afternoon murders.

The accused teenage Facebook poster appeared in Christchurch District Court on Monday and was granted an interim name suppression order, but he was denied bail by Judge Stephen O’Driscoll.

The young man has also been charged with allegedly posting to social media a photograph of one of the South Island mosques being attacked with the message ‘target acquired’ along with other chat messages ‘inciting extreme violence’.

Events just before the Shootings and the aftermath…interesting – Mick Raven

Police have now arrested four people in connection to the deadly shooting.

One of the gunmen, who identified himself as a 28-year-old Australian named Brenton Tarrant, live streamed on Facebook the shooting at the Al Noor Mosque.

Suddenly a Lone Wolf now? what did they do, un-arrest them – Mick Raven

In 2007, Hicks consented to a plea bargain in which he pleaded guilty to charges of providing material support for terrorism by the United States Guantanamo military commission under the Military Commissions Act of 2006.

Hicks received a suspended sentence and returned to Australia. The conviction was overturned by the U.S. Court of Military Commission Review in February 2015.

Hicks became one of the first people charged and subsequently convicted under the Military Commissions Act.

There was widespread Australian and international criticism and political controversy over Hicks’ treatment, the evidence tendered against him, his trial outcome, and the newly created legal system under which he was prosecuted.

In October 2012, the United States Court of Appeals ruled that the charge under which Hicks had been convicted was invalid because the law did not exist at the time of the alleged offence, and it could not be applied retroactively.

An excuse for imprisonment and torture….

Posted on March 19, 2019, in ConspiracyOz Posts. Bookmark the permalink. Leave a comment.