Leave The Grid…Save Yourself! – ConspiracyOz 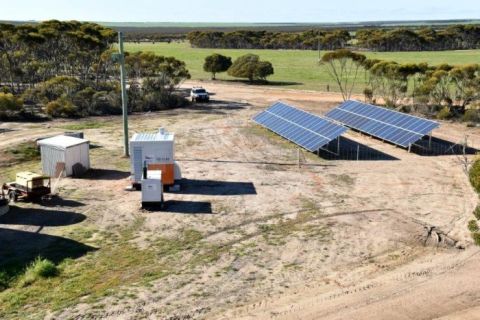 Going off-grid could be the way forward for communities on the fringes of WA’s power network after a trial of solar units exceeded the expectations of those involved.

Fed up with frequent outages and voltage spikes, six farming households in Ravensthorpe, 500 kilometres south of Perth, chose to take a leap of faith and try living off the sun and lithium batteries.

“Friends are often out [without power] for up to 24 hours and thinking, ‘we might come visit because you’ve got power and we haven’t’,” she said.

WA’s energy utility Western Power offered the systems for free in the search for alternatives to the massive cost of replacing ageing poles and wires.

The utility builds and maintains transmission lines in remote areas, but landowners wear the cost of the lines on their properties.

Photo: The inside of a solar battery storage system. (Supplied: Western Power)

The Giles family spent tens of thousands of dollars connecting their farm in the 1980s.

When the region experienced major flooding in January, receiving 310 millimetres of rain in four days, the solar units kept the lights on while many grid-connected customers lost power for days.

“Cleaner meaning frequency and voltage consistencies … and that means less damage to things … like electric fence units with voltage spikes and fluctuations.

“We haven’t come across anything we can’t do that we could before as far as welding and using large amounts of power or starting electric motors, not a problem.”

Read the comments for information from more “off-grid” power users.

The trial’s success has wide-ranging implications for the future of power generation in the country, bringing with it huge savings for taxpayers.

Ravensthorpe is a microcosm for the nation’s power problems, one of thousands of tiny communities at the edge of the electricity grid.

For example, WA’s South West network spans more than 250,000 square kilometres — an area the size of the United Kingdom — yet it only services one 50th of the population.

Getting power to those communities is costly, unreliable and unsustainable, prompting utilities to look for alternatives.

“There’s the potential for 3,000 sites that have similar types of reliability on those edge of grid type communities that we could put that similar technology in,” Western Power CEO Guy Chalkley said.

Everyone within the grid pays the same energy tariff, meaning people in Perth subsidise the cost of supplying power to the bush.

It is a problem Western Power believes the Ravensthorpe trial has solved, potentially allowing it to save hundreds of millions of dollars.

“You’d be talking about a saving of about $300 million in terms of current cost of investment and cost of ongoing maintenance of distribution line against the cost of the stand-alone power system,” Mr Chalkley said.

Regulations ‘need to catch up’

But the utility has hit a roadblock.

Legislation written before the technology existed only allows Western Power to distribute energy through poles and wires and not generate it — which is how regulators view capturing solar rays for battery storage.

This has meant the utility has had to extend the trial for a further three years to allow the households to keep their systems.

Consultants are warning the government against dragging its feet.

“I think the regulations need to catch up, the fact technology has moved on and that the opportunity to provide a better outcome for consumers is being facilitated by that technology,” energy consultant David Martin said.

“If it makes sense to put in a stand-alone power system, put it in, but let’s not waste time rebuilding networks we don’t need.”

Energy Minister Ben Wyatt said while he was supportive of Western Power’s efforts, he needed to consider if it was appropriate for the utility to enter the power generation market.

The utility would require both legislative and regulatory changes to roll out the systems more broadly.

It seems the families of Ravensthorpe could be waiting a while longer before they officially cut their ties to the grid.

The fall and fall of rooftop solar prices: four years of data | RenewEconomy

How Much Do Solar Panels Cost? | See Up To Date Prices

What caused the blackouts in Melbourne, and do Victorians need to get used to power cuts? – ABC News

Do you really want to go off the grid with your solar power system? – Solar Quotes Blog

How Much Does Off Grid Solar Cost?

Posted on February 24, 2019, in ConspiracyOz Posts. Bookmark the permalink. 1 Comment.