Video: ‘They made a bureaucracy around getting that 10 cents back to the farmer’ (ABC News)

Federal Agriculture Minister David Littleproud has launched a scathing attack on Coles over its handling of the 10c milk levy for drought relief, calling the supermarket chain’s approach “slippery” and saying the extra money may not even go back to the right farmers.

Mr Littleproud also rounded on Aldi, saying the German-owned supermarket giant refused to apply any levy and had done “bugger all” to help Australian farmers.

The Minister’s broadside came after Woolworths last month responded to calls from the dairy industry by announcing it would increase the price of its own brand milk by 10 cents a litre as part of a new special drought relief milk range.

Coles quickly followed suit, but only for its 3-litre own brand milk.

Mr Littleproud said he wanted to give Coles the benefit of the doubt but he has now concluded it is an “empty media stunt”.

“The reality is, that is a very narrow portion of their range that sells,” he said.

“What they’ve also done to compound this is actually made a bureaucracy around getting that 10 cents a litre back to the farmer — they’ve actually now asked the farmer to apply for it.

“This just shows that Coles are either lazy or at best being slippery.”

The frustration has been echoed by farmer Shane Hickey, whose Facebook plea for help from the supermarkets went viral and is credited with prompting the levy. 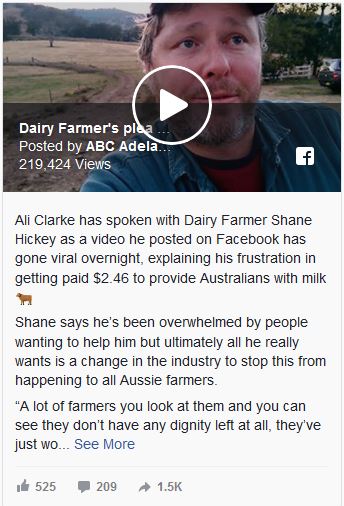 Mr Hickey told ABC’s The World Today Coles should have implemented the levy on all sizes of its milk, and said the application model had delayed funds going to farmers.

“All they had to do was give the money back to the processors, the companies that pack the milk, to give directly back to the farmers, and have an audit in place.

“But Coles has gone about this crazy scheme where you’ve got to fill out an application form, you’ve got to send all this paperwork in.”

Mr Littleproud said under Coles’s models there was no guarantee the money collected would go to the particular farmers who supplied the milk, or that they would be paid according to the volume of milk they supplied.

Coles has since released a statement rejecting the Minister’s comments.

“It is disappointing that the Minister has chosen to criticise Coles — which has already committed over $12 million for drought relief — before becoming familiar with the facts,” the statement reads.

“Coles has established the Dairy Drought Relief Fund to ensure 100 per cent of the funds raised from this 30c increase on the price of Coles own brand 3L milk will be donated directly to dairy farmers affected by drought.”

Coles said it had also appointed consultancy firm PwC as an independent auditor to oversee the application process and verify that funds have been allocated to drought-affected dairy farmers.

Aldi can ‘go jam it’

Mr Littleproud saved some of his most stinging comments for Aldi, saying “the big German … won’t even come to the party and help the dairy industry at all.”

“Aldi basically turned around and said ‘go and jam it’,” he said.

“Well, you know what, we should say to them, you go and jam it.

“It’s time that the Australian consumer looked at Aldi and what they’ve done.”

Forget dollar a litre milk. The dairy crisis has more to do with global trade wars than it does with cheap supermarket milk.

In response, Aldi released a statement saying it was supporting farmers during drought time by “accepting price increases” on the milk it purchased, but not passing those extra costs on to shoppers.

“Without a transparent, auditable and equitable process for funds collection and distribution, we believe that it would be irresponsible of Aldi to tax consumers on the purchase of milk,” the statement reads.

“Our firm preference is to support government-led industry reform, not short-term levies that could artificially alter market dynamics and have limited impact for those most in need.”

There is a known crisis in the dairy industry in Australia, with the Australian Competition and Consumer Commission calling for a mandatory code of conduct to guide the sector.

Mr Littleproud said he was currently working on this, but in the meantime he suggested people consider shopping at independent grocers and buying branded milk.

“The Australian public have all the power in this. They can vote with their feet and their wallet,” he said.

Posted on October 23, 2018, in ConspiracyOz Posts. Bookmark the permalink. Leave a comment.