← Google+ social media service to shut down after private data of at least 500,000 users exposed
Time For D.I.Y. Internet – ConspiracyOz →

Our Faceless and Genderless Future? – ConspiracyOz

How Lift Off enlightened and ‘terrified’ Aussie kids with its faceless, genderless doll 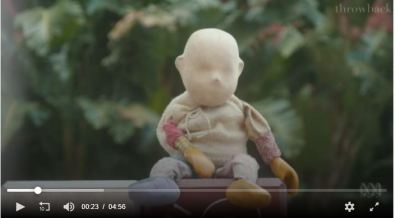 “A lot of kids watching it who I’ve met as adults were terrified of it”, says Play School presenter Luke Carroll, of the faceless doll from ABC’s Lift Off — the show that launched his acting career.

“But it never scared me, I used to always look forward to rocking up to the set and grabbing EC.”

“EC”, the notorious faceless, genderless doll, was supposed to represent “every child”.

“It was a blank canvas for anything you wanted it to be, so EC was a representation of a kid’s imagination”, Carroll says.

This kind of Utopian vision characterised the ’90s show. But in practice, as Carroll puts it, “I think that doll gave a lot of people nightmares.”

Lift Off wasn’t your average kids’ show. It was the product of an epic educational effort, designed to make the “ideal” children’s program.

Creator Patricia Edgar claims it was the “most ambitious program produced for the age group”, at that point.

The dream of the ‘perfect show’

Edgar was an educator before she became a producer. She was convinced that kids’ shows didn’t prepare children as people for the world.

“Sesame Street was about school readiness, number and letter recognition,” she claims.

“They didn’t broaden their focus to develop interpersonal and intrapersonal segments until they saw what we were up to.”

At this time, the early ’90s, American psychologist Howard Gardner’s theory of “multiple intelligences” was taking off. It said there wasn’t just one type of intelligence but many — “book smarts” were one thing, but what about visual-spatial intelligence, or interpersonal skills?

It’s an idea we take for granted now but at the time it was ground-breaking.

Lift Off hoped to develop kids’ intelligence across the board, to redress the shortage of pre-school places at the time.

Television could reach every child, they thought.

What does a child need to know?

During the two-year development process, Edgar put 70 experts in a room, from philosophers to musicians, mathematicians, illustrators and child specialists, and asked them what children aged 3 to 8 needed to know. From this, they designed the Lift Off world and its characters, who all needed to serve an educational purpose.

The show aired three times a week from 1992-1995 and was supported by outreach and curriculum programs in schools.

As you might expect, Howard Gardner himself was a fan, saying “the really crucial decision in Lift Off is to treat youngsters as thinking, feeling human beings.”

‘The next Sesame Street’

According to Edgar, broadcasters around the world were taking note of the innovative program, which was being dubbed into European languages, and the head of BBC Children declared it “the next Sesame Street”.

“Sesame Street was worried we would take their market so they came to Melbourne and offered me a global sale so they could put Lift Off on the shelf,” Edgar claims.

“They were unashamed in their offer. I said no.”

The show was not renewed by ABC when its season finished in 1995. But it had already made its mark.

Photo: Lift Off featured a diverse cast in a time when this was uncommon. (Lift Off)

Before diversity was a buzzword

“There weren’t many Aboriginal child actors around when I was starting out in the industry”, says Carroll.

“A lot of other Aboriginal kids I went to school with said, ‘Luke, it’s fantastic’. They could relate to my character and feel represented and proud of who they were — it helped them walk tall in everyday life.”

Before diversity was a buzzword in casting, Lift Off featured Asian, African, Aboriginal and Italian child actors, the Italian character also having a hearing impairment.

Their families were diverse too, with different types of parents, including a single mother, all living in the same apartment block.

“I’ve known some [Aboriginal] actors who’ve come through the biggest drama schools in Australia because they saw me on Lift Off when I was a kid,” says Carroll.

“That’s the greatest honour I’ve had, to have inspired my fellow actors who I now share the stage with.”

Photo: Luke with his son Enzo and his other child, EC. (ABC News: Dave May)

For Carroll, things have now come full circle, lodged back on ABC screens as a Play School presenter.

“Lift Off lives on within me … It helped mould my imagination as a kid and I brought that with me onto the set of Play School.

“Children are like sponges and that’s why their education at such a young age is very important.

“I think children’s television can help guide them into an even more diverse way of thinking, of acting, of creating this world they live in.”

Watch Throwback on News Channel or iView to meet the people who shaped Australian childhoods.

Posted on October 15, 2018, in ConspiracyOz Posts. Bookmark the permalink. Leave a comment.

← Google+ social media service to shut down after private data of at least 500,000 users exposed
Time For D.I.Y. Internet – ConspiracyOz →