← Natural News calls for the arrest, prosecution of Google executives for racketeering and fraud
China’s Serious & Breaking Vaccine Scandal: Are Your Vaccines Made In China? →

Travellers could face fines of up to $4200 or imprisonment if they do not comply with new police powers to request identification at Australian airports, eject people from the premises and ban them from flights.

Under legislation introduced to Parliament by the Morrison government on Tuesday, police will be able to carry out identity checks when they suspect people are involved in criminal activity that poses a threat to the public.

Police will be able to issue a “move on” direction if someone refuses to cooperate or if they believe it will disrupt an imminent security threat. The person can also be banned from entering airports for 24 hours. 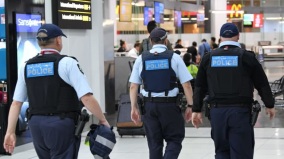 There will be boosted security at Australian airports. Photo: Justin McManus

“Police at our airports are highly trained in behavioural analysis and threat assessments. However, they don’t currently have the power to check ID unless they can link behaviour to a specific offence,” Home Affairs Minister Peter Dutton said in a statement.

“The proposed powers are commensurate with aviation security threats and will help our police protect the Australian community.”

If people do not cooperate with police orders, they face fines of up to $4200 under the Crimes Act. They could also be imprisoned for up to 12 months if they provide misleading information or for up to two years if they are deemed to be obstructing a Commonwealth official.

Government identity documents or other personal identity cards and documents can be used by travellers when they face an identity check by police. If they do not have any documentation, they can provide their name and other details.

The government believes the current laws – which place a stricter limit on authorities’ ability to conduct identity checks at major airports – are outdated given the increased terror threat.

Explanatory information provided with the legislation says, “Without specific intelligence that an offence has been, is being, or will be committed, AFP officers have reported that, under the current framework, they are unable to assess potential threats within airports by directing a person to provide evidence of their identity.”

Shadow attorney-general Mark Dreyfus said Labor would examine the legislation closely and come to a position in due course.

“We expect this bill to be thoroughly examined through the parliamentary joint committee on intelligence and security,” Mr Dreyfus said.

Greens senator Nick McKim said Mr Dutton was “attacking the basic rights of every Australian to distract from the multiple scandals he’s involved in”.

Senator McKim warned the Home Affairs Minister could not be trusted with law enforcement agencies in his ministry and called on Labor to oppose the legislation.

“There is no justification for this ‘papers please’ policy,” he said.

“This adds to the over 200 legislative changes over the last 20 years which remove fundamental rights and freedoms from Australian people.”

The laws are in addition to a $300 million expansion of security at Australian airports, including the introduction of advanced X-ray and body scanning machines.

Posted on September 18, 2018, in ConspiracyOz Posts. Bookmark the permalink. 1 Comment.

← Natural News calls for the arrest, prosecution of Google executives for racketeering and fraud
China’s Serious & Breaking Vaccine Scandal: Are Your Vaccines Made In China? →