← Children more likely to believe robots’ answers than their own, study suggests
Those without Sin Cast the First Stone?…mmm – ConspiracyOz →

New App “Report It, Don’t Ignore It” Encourages Students To Spy On Each Other 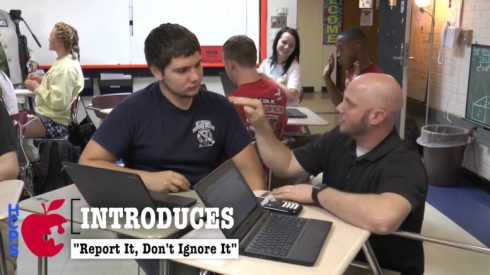 The “Report It, Don’t Ignore It” application released by Henderson County Public Schools is encouraging students to spy on each other and report suspicious activity within the app, Blue Ridge Now reported.

Henderson County students in the upcoming school year will be able to report their peers to administrators using their smartphones.

The app is available on both Android, IOS and has a web version which allows users to upload up to three pictures or screenshots of physical or social media threats, in a field for “Optional Supporting Evidence.”

Users of the app will be able to report a number of categories including threats, bullying, drugs, fighting, a personal crisis, vandalism, weapons and others, directly to school administrators who can immediately alert law enforcement if needed.

Reports on the app can be submitted anonymously or signed with a student’s name, include additional witness information, and names of people involved in the incident.

Meanwhile, this issue is far from minimal as the state is developing a similar reporting app for schools to use statewide, but that won’t be ready until 2019.

“Report It, Don’t Ignore It” was developed by the district’s Technology Department to “approach school safety proactively, and to improve two-way communication between students and administrators.”

This is conditioning to accept the nanny police state and expands on a wider trend that we have seen more recently over the years. That trend is the installation of surveillance cameras in schools. Even in school bathrooms as Activist Post reported last year.

Except, in this case, the school district is asking every student to be the eyes and ears of administrators for their “safety.” As a result, handing students the tools to not only report each other but to spy on each other.

“We know that school safety is a community effort,” Caldwell said. “Administrators and law enforcement can only respond to concerns in schools – and parents can only respond to them at home – when we’re made aware of them. Our students and staff are our best eyes and ears.”

“We hope this tool will empower students to take ownership of their campus’ safety, keep each other accountable, and know their administration is here for them,” Caldwell added. “We’re here, and we’re listening.”

North Carolina isn’t the only state pushing for a mobile app for students to report; after the Florida school shooting earlier this year Florida’s governor Rick Scott proposed a similar app echoing an old motto from the Bush-era “See Something, Say Something.”

Whereas there is an overwhelming amount of violence in schools these days and bullying which leads to suicide, students should consider the potential future implications of giving a Stasi tool the go-ahead.

Public school is becoming more and more like a prison in the U.S. and UK; prisoners should have a camera on them, not students going to a school of “higher learning” to get an education.

Below is a horrifying promotional video for the tool with students from the school district endorsing the application one by one.

Posted on August 26, 2018, in ConspiracyOz Posts. Bookmark the permalink. Leave a comment.

← Children more likely to believe robots’ answers than their own, study suggests
Those without Sin Cast the First Stone?…mmm – ConspiracyOz →