Two small towns in regional South Australia have been divided for more than two years over support for a radioactive waste management facility.

The Federal Government has shortlisted three sites which could become the location for a facility that would permanently hold low-level nuclear waste and temporarily store intermediate-level waste.

Two of these sites are at Kimba, on the Eyre Peninsula, while a third is near Hawker, in the northern Flinders Ranges.

In recent visits to the two towns, Resources Minister Matt Canavan held open forums for the first time, where locals could directly ask him questions.

Senator Canavan is the minister responsible for selecting a site and said he was not surprised by the division the facility had caused.

Photo: Matt Canavan was in Hawker and Kimba to hear community concerns about the project. (ABC News: Samantha Jonscher)

“I understand that there are strong views held on either side of this debate — I don’t think that’s surprising,” he said.

“If it was easy, the Federal Government would has resolved this issue probably decades ago.

“It is a tough decision for some and I can understand people not being supportive of it.”

For Kimba, concerns surround the impact a nuclear waste facility would have on international perceptions and potential damage to Kimba’s clean, green agricultural reputation.

“All of our grain is exported, we don’t have any domestic outlet,” said Peter Woolford, chairman of the group No Radioactive Waste on Agricultural Land in Kimba or South Australia.

“If someone decides they don’t want to buy grain off Eyre Peninsula, because of that perception, what do we do?”

But, for life-long farmer Trevor Cliff, the facility could help revive a dying town.

“When I started farming there was 240 farmers in the district and now we’re down to 90,” he said.

“The whole debate we’ve had amongst the community has widened its knowledge of an industry that nobody knew about.

“The young people have been able to learn about it and it could be a future direction for their careers.”

Photo: The face to face meetings were an opportunity for community members to voice their concerns and ask the minister questions. (ABC News: Samantha Jonscher)

At Hawker, a former railway town in the Flinders Ranges, opponents questioned what the facility could mean for the region’s tourism.

Anti-nuclear campaigner Greg Bannon said it was the worst place for a waste facility.

“It’s in a flood plain and it’s an area of active seismic activity,” Mr Bannon said.

“It’s considered to be one of the most seismically active areas in South Australia, in Australia in fact.”

But not everyone has opposed the facility.

Of the $31 million package promised to the town that takes the facility, $3 million will be allocated to Indigenous education and heritage programs in Hawker.

“[It’s] telling young Aboriginal people, you are going to get a bit of training, get a job,” Mr McKenzie said.

“There is going to be 45 jobs when it’s built, so hopefully it will be 20 Aboriginal people getting jobs.

“No one is going to get in our way to start a business to get our young people in jobs.”

Support to be determined

On August 20, a postal ballot will begin in the two towns, where support would be determined for the facility. 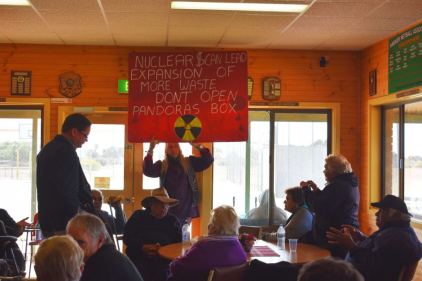 Senator Canavan said the facility would need “broad community support” for it to go ahead, but the vote will not be the only factor in making the final decision.

“I’ll also take into account some groups’ views very strongly — the neighbouring landholders, they’ll be of great interest and consideration,” he said.

“The local Indigenous community, that I’ve spent a lot of time with at Hawker — the Adnymathanya — I’ll be taking their views strongly into account.”

Before the ballot, a Senate inquiry into the site selection process, which includes the impact a community benefits program is having on support, will hand down its findings.

“I’ll be very interested in their recommendations,” Senator Canavan said.

“I do think the government has run an extensive and informative process.

“I’m accountable and open to be criticised for decisions.”

Posted on August 18, 2018, in ConspiracyOz Posts. Bookmark the permalink. Leave a comment.