The founder of the English Defence League, “Tommy Robinson“, has had his conviction for contempt of court quashed as the Court of Appeal orders a new trial.

The far-right activist, whose real name is Stephen Yaxley-Lennon, was released from prison on bail after three judges ruled that he was jailed earlier this year following a series of procedural “flaws”.

Robinson, 35, had been convicted of contempt in May after broadcasting on Facebook a 1.5 hour video from outside Leeds Crown Court about a case which has a blanket reporting restriction imposed for legal reasons. His footage was watched by 250,000 people when it went live.

Within hours of posting the video online he was brought before Judge Geoffrey Marson QC in Leeds and jailed for 10 months with an extra three extra months for an earlier suspended sentence for contempt.

Yesterday the Court of Appeal found that that judge had rushed into proceedings despite Robinson having removed the video from the internet. 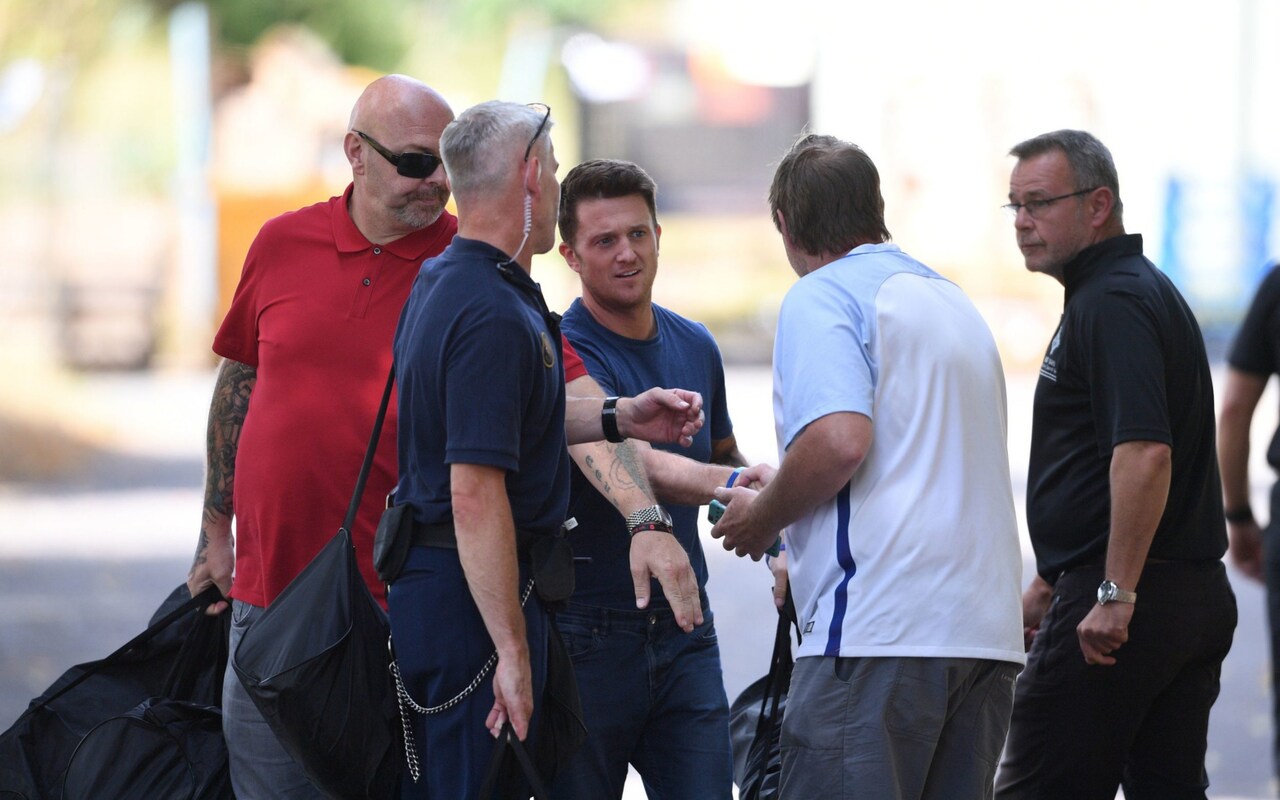 The appeal judges also found he was sentenced as if he had pleaded guilty, despite it being unclear what he was admitting to, and there had been a “muddle” about the nature of the contempt he faced.

The judges said they were satisfied that the decision at Leeds to proceed to committal to prison “so promptly”, and without “due regard” to rules governing procedures surrounding someone alleged to have acted in contempt of court “gave rise to unfairness”.

They added that the haste in bringing him to court back in May meant his barrister, found during a 33 minute adjournment, had “limited opportunity… to investigate mitigation” or obtain character references.

Delivering the ruling in the Court of Appeal in London, Lord Chief Justice Lord Burnett said: “Where a custodial term of considerable length is being imposed, it should not usually occur so quickly after the conduct which is complained of; a sentence of committal to immediate custody had been pronounced within five hours of the conduct taking place.”

After granting Robinson conditional bail they stressed the need for a fresh hearing before a different judge to be held “as soon as reasonably possible”. Robinson, who was not in court for the hearing, was banned from going within 400 metre of Leeds Crown Court as part of his bail conditions. The fresh contempt case will be now heard at the Old Bailey in the capital.

The decision to free him from prison was met with a round of applause from his supporters in court. However, activists supporting Robinson and rival anti-fascist campaigners faced each other chanting outside the court.

In the afternoon, Robinson emerged from Onley Prison, Warwickshire, in a blue T-shirt, jeans and carrying a black holdall, but refused to answer reporters’ questions.

As he was ushered into a black people carrier by some of his supporters, he said: “I’ve got a lot to say, nothing to you. I just want to say thank you to the British public for their support.”

At the appeal hearing the judges had been also urged to overturn a contempt of court finding against Robinson that had been made last year at Canterbury Crown Court. 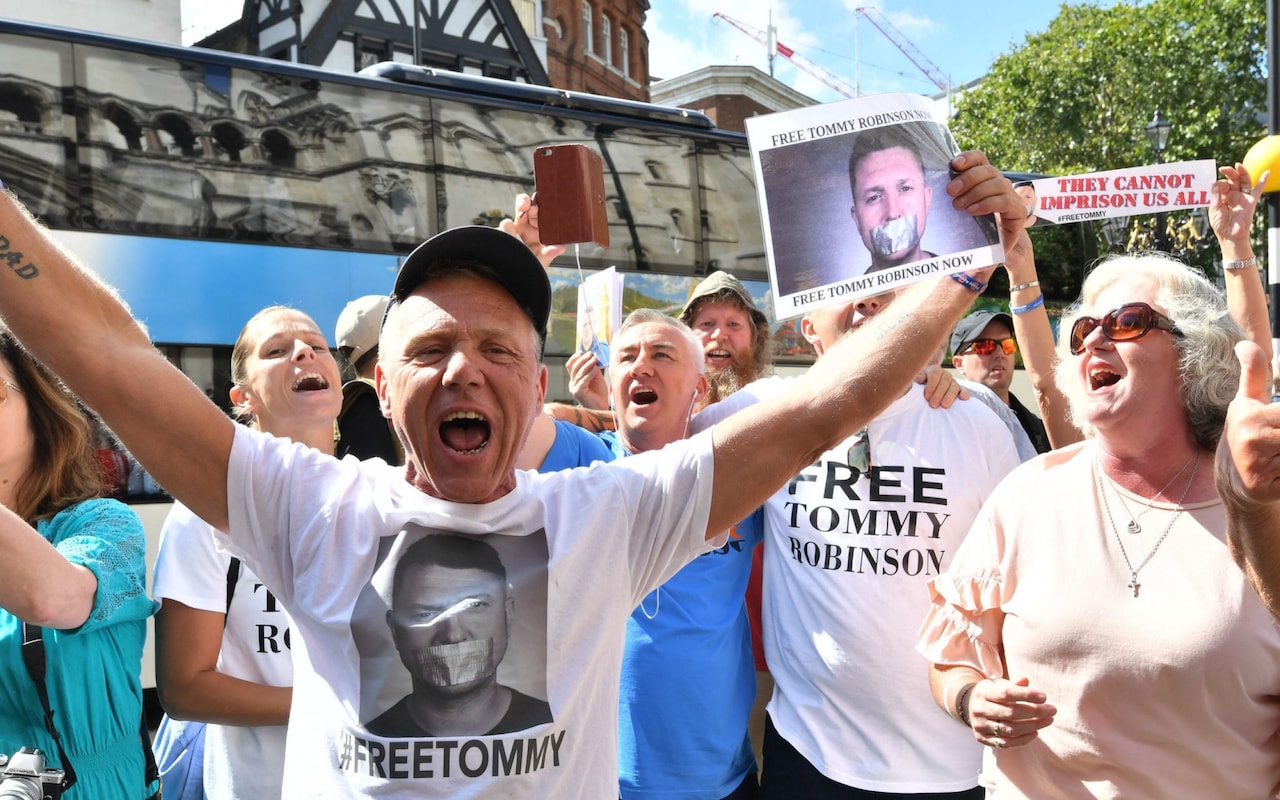 In May 2017, he was filmed outside court commenting on a trial of four Asian men who were later convicted of gang-raping a teenage girl.

He was given a suspended three-month sentence and told his conviction was not about “freedom of speech”  but about “justice and ensuring that a trial can be carried out justly and fairly”. Reporting restriction on that case were later lifted. Such reporting restrictions are usually imposed if a judge fears publication of the case could prevent a fair trial in that hearing, or any linked cases.

Jeremy Dein QC, for Robinson, told the appeal hearing the Canterbury conviction should be quashed along with the Leeds one because of a “conglomeration of procedural deficiencies” which had given rise to prejudice.

However, the appeal judges only quashed the Leeds case.

Tommy Robinson: The divisive founder of the EDL

For years, Tommy Robinson faced the prospect of slipping into obscurity. With the demise of the English Defence League, a group he founded in 2009, he struggled to find a platform to air his extremist rhetoric.

After becoming a self-declared journalist, he used social media to broadcast claims about ongoing “secret” trials in the UK.

But his new found fame came not from breaking stories, but instead from coming into conflict once again with the law of the land.

When he was jailed in May for contempt of court after filming outside Leeds Crown Court, a case to now be retried, a series of protests were held across the country.

Sensing a conspiracy, his supporters immediately claimed he was “gagged”. It prompted Donald Trump Jr to defend him, urging America not to “follow in the footsteps” of the UK.

Donald Trump’s controversial right-wing advisor, Steve Bannon, waded on UK radio to declare Robinson, who has criminal convictions dating back to 2005, as the “backbone of this country”.

Meanwhile, anti-Muslim figures and organisations campaigned and raised funds to call for his release.

Among those, Far-right Dutch politician Geert Wilders, who has compared the Quran to Hitler’s Mein Kempf, yesterday tweeted that it was “fantastic” Robinson was now free.

The anti-fascist group, Hope Not Hate claim their arch-rival remains a violent thug (he posted a clip of him once hitting a migrant in prison) who in Canterbury last year nearly brought down a case that could have meant rapists were freed.

The clamour to free him could be renewed if a future hearing rules he was in contempt when broadcasting about that case heard at Leeds Crown Court.

Posted on August 18, 2018, in ConspiracyOz Posts. Bookmark the permalink. 1 Comment.