← The Blue Print of China is Upon Us – ConspiracyOz
One for You, Two For Them….$190 million to Aussie Farmers vrs $444 million G.Barrier Reef F. (6 people) – ConspiracyOz →

The public execution of Infowars is dangerous and counterproductive

In cutting off the rightwing media outlet without explanation, the social media companies have simply fed the conspiracists 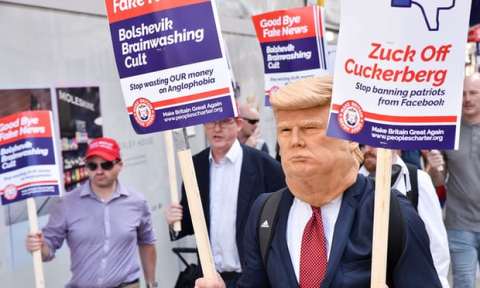 Always the trendsetter, Apple’s decisive action against the rightwing media outlet Infowars has led to an unprecedented domino effect. After Apple delisted podcast links, Spotify soon followed. Facebook made a decision to “unpublish” Infowars’ pages hours later, before the group’s main home, YouTube, said it had “terminated” the group’s channel, which was watched by 2.5 million subscribers (Alex Jones claims millions more have signed up since the ban).

Hundreds of well-intentioned campaigners, commentators and even journalists are celebrating the public hanging of Infowars – but this style of execution benefits no one.

The biggest internet platforms are increasingly society’s chief arbiters of free speech. Our conversations, relationships, businesses and democracies are increasingly mediated by a handful of global, for-profit companies.

Those companies are within their rights to set rules about who can and cannot share information on their sites – but Facebook and YouTube have become de facto global information services. Of the world’s 4 billion-plus internet users, more than 2 billion are active Facebook users and 1.8 billion have active YouTube accounts. When tech giants hold a monopoly on free speech online, that responsibility must be taken particularly seriously.

But the way in which the tech giants have dealt with Infowars doesn’t appear to be serious at all. The industry-wide no-platforming appears to be a herd-like PR exercise rather than a regulatory one. Despite the prevalence of misogynistic, race-baiting and some frankly bonkers Infowars content, the removals were not in relation to specific posts or videos and the reasons given were generalised ones. Even smaller companies such as Discus, LinkedIn, MailChimp and Pinterest have rushed into the industry dog-pile.

It may be that Infowars exceeded a prescribed number of strikes or warnings and, therefore, committed its own suicide – but it is vanishingly unlikely that Apple, Spotify, Facebook and YouTube, not to mention the others, all arrived at their own independent conclusions against Infowars at the same time purely by coincidence. If we are indeed witnessing international erasure on the basis of political opportunism rather than a specified threshold of the rules being breached, we should all have cause for concern.

It is vital that the tech companies inspire public trust and confidence in their judgments. They must take their responsibility to protect users from violent and unlawful content as seriously as their duty to uphold and promote free expression. Sensitive decisions about what is and is not permissible speech or information need to be made transparently and delivered honestly, objectively and equitably. The rules must be fair and, if they are breached, there should be clear, foreseeable consequences.

It is easy for people to accept or even congratulate the no-platforming of Infowars – but this watershed moment in the information age means it will not be the last group to be summarily unpublished, terminated and effectively thrown down the electronic memory hole without a specified explanation. And next time, people may not be so comfortable with the target.

For the tech giants to collectively erase Infowars with little explanation – despite the likely availability of multiple rule breaches, some of which I had reported myself – risks the appearance of arbitrary censorship, executed in concert. Surely the very worst way to convince conspiracy theorists that there is no conspiracy is for the world’s most powerful tech companies to simultaneously silence the most popular conspiracy theorist?

We cannot unconditionally trust profit-driven tech companies to censor responsibly – public trust needs to be earned and procedural safeguards need to be instituted. Just last week, it emerged that YouTube’s parent company, Google, is building a Chinese state-approved news app and search engine to deliver a highly censored world view to millions of citizens on behalf of the communist dictatorship. Complicity with a totalitarian regime to oppress a population would suggest that a regulatory system deserving of public trust is missing.

Millions of Infowars’ mostly rightwing viewers and listeners will now feel a toxic combination of important and silenced. The platforms have missed numerous opportunities to demonstrate they can be responsible and even-handed regulators. Now the platforms have missed an opportunity to show, with total clarity, exactly how Infowars had caused harm or breached their rules.

Instead, they have escalated the very political information war Infowars has long claimed as its raison d’etre. And while Infowars may be one of the easiest political groups to purge, I fear it will not be the last.

A version of this article was previously published here.

Posted on August 14, 2018, in ConspiracyOz Posts. Bookmark the permalink. Leave a comment.

← The Blue Print of China is Upon Us – ConspiracyOz
One for You, Two For Them….$190 million to Aussie Farmers vrs $444 million G.Barrier Reef F. (6 people) – ConspiracyOz →