← China’s Ban on Australia’s Waste – ConspiracyOz
The Government says My Health Record data is safe, but how is a privacy breach defined anyway? → 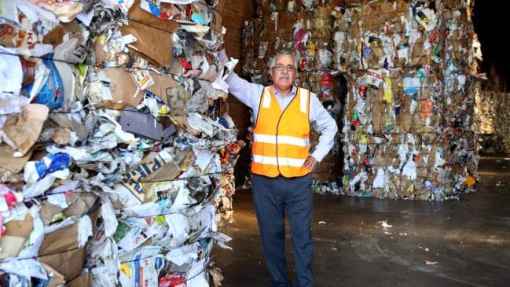 China’s crackdown on taking ­foreign recycled waste will cause council rates to rise for households across the nation, in some cases at more than double the rate of growth previously forecast, experts warn.

Under the “National Sword” policy aimed at reducing its pollution problem, China greatly ­reduced the amount of foreign garbage it would accept from January 24.

Municipal Association of Victoria chief executive Rob Spence said all Victorians could see rate bills rise by more than the 2.25 per cent regulated cap, as councils introduced new levies and other fees to cover the cost of dealing with the waste.

Australia has relied heavily on China handling much of its waste over the past 15 years, exporting more than 600,000 tonnes of recyclable trash to China last year.

Under the new policy, China has banned accepting 24 types of solid waste and will take only high-quality recyclable garbage that is almost “uncontaminated”.

China’s changes mean many waste contractors employed by Australian councils can no longer sell recycled rubbish to China, and instead are being forced to stockpile them. Victorian councils are drawing up plans to dump their stockpiles in landfill. Doing so is not only costly — councils pay large amounts for recycled rubbish to be dumped in landfill, instead of China paying them for the waste — but risks derailing the nation’s recycling system, along with the public’s support for it.

Much of the recyclable waste taken from Australian household recycling bins and sold cheaply to China is low quality because many items are of limited use for recycling and because of improper sorting. One pizza box in a bin would render all recyclable garbage it contained contaminated, said Linda Scott, president of Local Government NSW.

Mr Spence said council-­employed recyclers were talking about new costs of “between 1.1 per cent and 2.5 per cent on top of the 2.25 per cent rate cap”, with both regional and metropolitan councils to be hit. “While rural councils have been the most ­directly affected to date, it has become clear that the impacts will be statewide, with significant cost implications likely for all councils and ratepayers,” he said.

Council waste charges are ­excluded from the state rate cap.

He called on the NSW government to “show some urgency in developing guidelines to ensure this $47m is spent in a prompt and proper manner”.

Mr Spence said he had been meeting councils, recyclers, collectors, Environment Minister Lily D’Ambrosio, the Treasurer’s office and the Department of ­Environment, Land, Water and Planning in an effort to help broker a resolution.

NSW ratepayers are expected to be similarly slugged. Ms Scott said councils in regional areas would be hit harder than city counterparts, where there was more developed infrastructure for processing recycled waste. “We have sought support from the NSW government in the ­interim to help councils stockpile the waste,” Ms Scott said.

In response to China’s ban, Victorian-based recycling company SKM Recycling, one of the state’s largest recycling providers, has threatened to close its gates to councils delivering it waste. A memo circulated by the Municipal Association of Victoria last Wednesday urged councils to develop a “contingency plan” for their yellow bin waste if SKM followed through with the planned closure. “If councils are unable to find landfills which will accept their recycling material, collection services may have to be stopped,” the memo said.

SKM did not respond to a ­request for comment.

The Victorian government has announced a $13 million funding package to help councils, and the NSW government has earmarked $47m. However, Ms Scott said money had been “simply diverted from funds already aimed at better managing waste throughout the state”.

Greens senator Peter Whish-Wilson accused the federal government of becoming too reliant on offshore markets to take care of Australia’s waste and failing to develop a sustainable domestic recycling market.

Environment Minister Josh Frydenberg said that while state governments had primary responsibility for waste management, he would discuss the issue at a national meeting of environment ministers next month.

“We’re talking to China and other countries, trying to explore other markets where we could export our waste,” Mr Frydenberg told ABC last month.

In South Australia, councils were briefed this week on the ­expected fallout from China’s ban and discussed the possibility of increasing household rates to cover additional processing costs.

Our business had sticked hygiene and control of all our recycling and were rewarded very well for it from our Chinese market where other recyclers just sent them what ever all mixed up and in reality trash.We kept all our plastics in there in there types and even recycled polystyrene which was very valuable., councils and others claim that polystyrene is not recyclable.Well it is if done properly, also plastic can be recycled in to products here cheaply and efficiently, it is only a matter of using ones brains and governments and councils just don’t appear to have any (brains) that is.The difficulty’s we had with government and councils  was unbelievable and they were not interested in doing anything.

Deliver the waste to your local Greens candidate , they know everything including why they continue to oppose incineration of waste to create power.

We could follow the NewYork council who compresses their waste loads it onto barges and takes it our into the Atlantic Ocean and dumps it as there is no land fill areas in their area . Great example to the rest of the world trying to control waste and why are the greens silent on this .

@Richard @brian NYC solid waste powder is sent down to one of the southern states in rail truck containers. I belive some 10000 tons per day.

It’s pretty embarrassing that we dispose of our rubbish off shore. Very short sighted. Rather than look at other ways of dumping perhaps some entrepreneurs will find ways to mitigate the packaging manufacturers foist on us in the name of market differentiation. Biodegradable products, high temperature furnaces, composting, etc. it’s implied that the cost of collecting, sorting, transporting, recycling using energy hungry processes is not commercially viable in Australia. Is this true? Perhaps we need some courageous politicians to impose environmental restrictions on the volume and materials manufacturers use for packaging as well as life cycle obligations on their products. Increased council rate is just the thin edge of the wedge. We can do better.

@Peter I would like to see anyone run a modern city without packaging.

@Petri All a deposit does is increase community cost. The reality is that recycling of domestic materials is a complete waste of time and money. Another greenie con built on the usual guilt trip about consumption.

@Ben It is called effeciency. The amount of material is insignificant

How is it that some councils are looking at turning garbage into power and putting that power into the grid? If there is a dollar in regenerating recyclables into further usable item, and there must be because China has turned it into big business, then why aren’t Australian manufacturing doing it and selling back onto the world market?

Posted on August 5, 2018, in ConspiracyOz Posts. Bookmark the permalink. 1 Comment.

← China’s Ban on Australia’s Waste – ConspiracyOz
The Government says My Health Record data is safe, but how is a privacy breach defined anyway? →