Trials of new technology that NSW plans to implement to spot drivers illegally using their mobile phones have also captured motorists in 80-to-100km/h speed zones who are texting with both hands, eating, reading and using illegal drugs.

A man illegally using nitrous oxide (known as nanging) while driving down a highway at 100km/h was among those captured on camera in scans of about 100,000 drivers across Australia.

Another driver was seen texting with both hands, said Alex McCredie, the director of One Task, which conducted the tests. Others were snapped with both hands off the wheel and in the air, with pets in their laps or unrestrained, doing their makeup, and reaching for objects.

One Task’s surveillance found illegal mobile phone use was endemic, with between 5 and 7 per cent of drivers in every city using them while driving at high speeds.

While One Task spotted a range of distracting behaviours, “mobile phone use eclipsed all these”, Mr McCredie said.

A police officer had his foot amputated after Jakob Thornton allegedly crashed into him and a colleague while looking at his mobile phone.

“[Mobile phones] seem to be an obsession today, they’re new and society hasn’t quite figured out how to interact with phones and what place they should have in our lives,” he said.

Drivers illegally using their mobile phone while behind the wheel

The government and road safety experts say these figures vastly underestimate the use of mobile phones because of the difficulty of gathering evidence at crash scenes.

To reduce fatalities and injuries caused by mobile distraction, the NSW government this week passed changes to road legislation providing it surveillance powers to develop a system to crack down on deaths related to mobile phone use.

One Task, is among a range of companies that have expressed interest in tendering to provide the NSW with camera technology to detect drivers texting, talking and handling their phones. 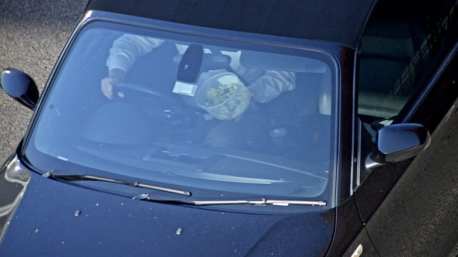 But Mr McCredie is urging lawmakers to use data like his to identify which behaviours were the most dangerous and develop policies to educate the public. For example, eating was distracting, but not illegal.

NSW Roads Minister Melinda Pavey said the road rules require drivers to maintain proper control of a vehicle, and not drive without a clear view. NSW Police enforce these rules as well as mobile phone laws so “drivers should remain focused on the task of driving and avoid potential distraction from other tasks”.

Professor Ann Williamson, the director of road safety research Transport and Road Safety, agrees that mobile phones are a dangerous distraction, adding that the estimates of fatalities and injuries they caused are vastly under-reported. But she said that most drivers are sensible.

Other devices — such as inbuilt navigation systems and radios — were also a distraction yet they weren’t regulated.

“We can’t say one is dangerous and one is not. Both are dangerous,” said Professor Williamson. 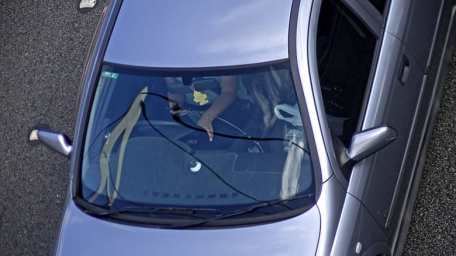 More research is needed, and she’s currently reviewing thousands of hours of videos made of Australian drivers as part of a four-month driving study.

“Most of the time, it is not true to say that every time you are not looking you are unsafe,” she said. Unlike P-platers, most experienced drivers could drive safely and occasionally do other things like turn the radio on.

Mr McCredie said his technology could make it possible to increase the numbers of people fined for illegally using their phones by thousands every day, which would cause mayhem if many people lost their licences.

“You know if there are 100,000 people crossing the Harbour Bridge, it would be possible to catch 500 in breach of the law,” he said. Currently, police catch about 109 people a day using their mobile phones, but his technology could catch that many in less than an hour.

How many drivers are caught on their phones now, and how long it would take to catch them under new laws

Some Comments from this Article – Mick Raven

Interested
1 month ago
This story has been up for any hours and no comments. It would have to be the most telling comment on how complacent and trusting we Australians are. Or should I say, you Australians because I think this is an astonishingly intrusive thing and I don’t feel complacent about this extraordinary proposal. We are quickly losing our private lives and the idea that we, the people, would agree to this intrusion is nearly beyond my comprehension. Adding it to the demands of Peter Dutton and his cohort for street level monitoring of everyone leaves me wondering what kind of country we are becoming. Except for NZ aren’t we the most free and uncomplicated country on earth? Do all of you really accept that you should be monitored in every way, every day while going about your daily ordinariness like driving somewhere, or walking somewhere?
iSniper
1 month ago
Just more blatant revenue raising. It’s illegal to even touch your phone whilst stopped at a red light, however you could apply your makeup, light a cigarette, fiddle with the radio, reach over and get something out of the glovebox, look through your briefcase on the passenger seat, etc etc. But touch your phone for a nano second and bang ! big fine and loss of points. After I was pursued down the road for having the temerity to pick up my phone and look at the screen at a set of lights after a message beeped through I asked the policeman how my heinous crime was worse than any of the other scenarios above, given i had not replied to the message nor had the phone in my hand for more than 5 secs . He couldn’t answer of course, because there is no logical explanation. But he got a conviction for his quota and the government coffers swelled some more…..and that set of lights on the 2 lane major arterial banked up with peak hour traffic was once again safe.
Julian
1 month ago
Completely agree. It’s the inconsistency that’s so stupid. Messing around with CD players (OK becoming less common nowadays of course), eating, or any of the things you mention can be just as distracting and cause an accident if done at the wrong moment.If there was genuine balanced rationale to the overall rules then people would have more respect for them. But there isn’t – the last law changes were a classic knee-jerk reaction to mobile phones as they are the most recent thing that has arrived as a possible driver distraction. Yes of course anyone who types texts while actually driving is a moron but picking up a phone for 5 seconds to look at a screen while in a traffic jam or at red lights is completely different.It must be technically possible to use mobile phone records to check whether someone was using a phone in the seconds before an accident (and probably exactly what app they were using too) – although I imagine the Telco’s wouldn’t release the data and privacy laws would also be an issue. But that’s the path I’d be looking at to police dangerous mobile phone usage.
MrTransfield
1 month ago
Before power steering and automatic transmissions, cars required some hard yakka to drive. Now with all the new technology, its no wonder people feel the urge to multitask
Wait til Autonomous Cars are Here…Uh Oh! – Mick Raven

Posted on July 1, 2018, in ConspiracyOz Posts. Bookmark the permalink. Leave a comment.