The Walls Have Ears – ConspiracyOz

In an unusual partnership, Amazon and Microsoft are working together to extend the abilities of their voice-controlled digital assistants.

They can even get two rival tech executives, Jeff Bezos of Amazon and Satya Nadella of Microsoft, to join hands in a rare partnership.

For the past year, the two companies have been coordinating behind the scenes to make Alexa and Cortana communicate with each other. The partnership, which the companies plan to announce early Wednesday, will allow people to summon Cortana using Alexa, and vice versa, by the end of the year.

It is unusual for big tech companies to cooperate on important new technologies that they want to stand out from the competition. Amazon, Apple, Microsoft, Google and nearly every other big tech company is pouring huge amounts of money into making digital assistants that are smarter and can do more, seeing them as a new way for people to interact naturally with devices and online services.

But Mr. Bezos and Mr. Nadella are concerned that keeping assistants from working together could hold them back. The way they see it, each assistant has unique strengths that could benefit the other assistants.

In an interview last Friday at one of Amazon’s Seattle high-rises, Mr. Bezos predicted that over time people would turn to different digital assistants — also called “A.I.s,” for artificial intelligence — the same way they turn to one friend for advice about hiking and another for restaurant recommendations.

“I want them to have access to as many of those A.I.s as possible.” Mr. Bezos said.

As an example, Mr. Bezos cited Cortana’s superior integration with Outlook, the popular calendar and email application that is part of the Microsoft Office suite of software. Because Microsoft controls both products, Outlook is integrated more deeply with Cortana than with other voice assistants.

Through its collaboration with Microsoft, Amazon said, Alexa users will get answers to some of the same questions that Cortana can now answer — for instance, when is the next budget review with the boss?

Initially, getting the two systems to work together is going to be a little awkward. Someone working with an Alexa device will have to say “Alexa, Open Cortana” followed by their command, while someone starting with a Cortana machine will have to say “Cortana, Open Alexa.”

The Amazon-Microsoft partnership started in May 2016, when Mr. Bezos raised the idea with Mr. Nadella at Microsoft’s CEO Summit, an annual event for business leaders in the Seattle area. Mr. Nadella was receptive to the idea, so a short while later Mr. Bezos emailed a draft of a brief news release that described how their assistants would work together, both men said. 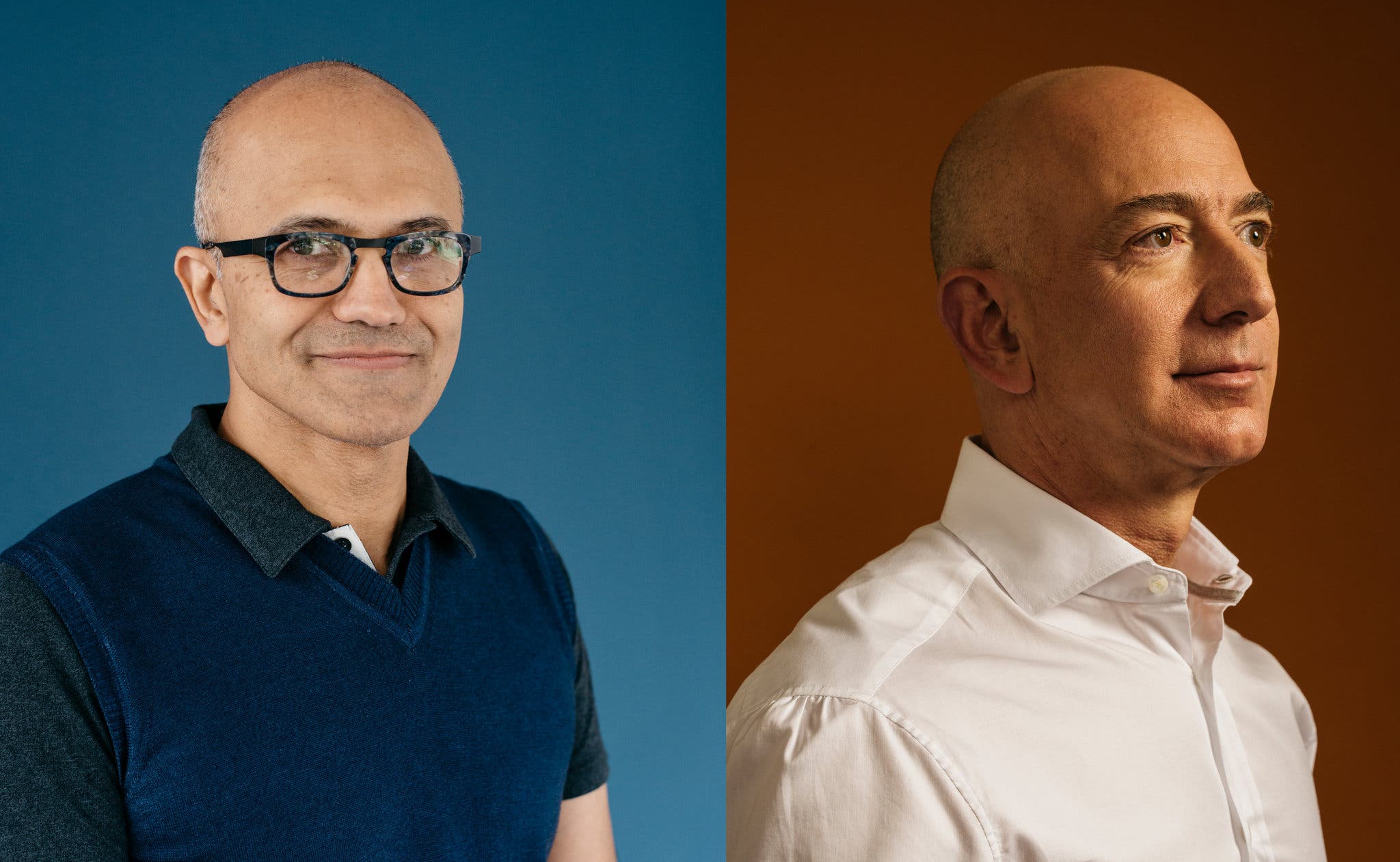 It is standard at Amazon to create such news releases for internal consumption as part of what Mr. Bezos calls the company’s “working backward process.”

Through that exercise, Amazon’s teams depict in writing how a new product or service will look to its customers before engineers write a line of code.

In a phone interview, Mr. Nadella compared digital assistants like Cortana and Alexa to competing web browsers that provide access to the same pools of online information.

“The personality and expertise of each one will be such that if they interoperated, the user will get more out of it,” he said. “That resonated for me and for him, and then that’s what led to the teams working.”

Mr. Bezos said he had not reached out to Apple or Google to invite them to join in the effort and does not know if they would want to.

“Hopefully, they’ll be inspired by it,” Mr. Nadella said. “At least that would be my hope.”

Apple and Google may see competitive advantages in keeping their A.I.s separate from rival assistants, partly as a way to protect a selling point of their mobile software, iOS and Android.

Apple is especially finnicky about wanting to control as much as it can of people’s experiences with its iPhones and iPads.

“There’s no reason Google or Apple would offer it because they’re trying to drive their own ecosystems,” said Jan Dawson, an analyst with Jackdaw Research, a technology research firm.

By contrast, Alexa is mostly used on Echo speakers that sit around a home, and Cortana is largely used on PCs.

Amazon says it has sold millions of Echo devices, accounting for around 70 percent of the market for smart speakers, according eMarketer, a market research firm. Microsoft says there are 145 million active monthly users of Cortana through Windows 10.

The two companies have struggled in the smartphone business, which makes it hard to get people using Alexa and Cortana outside homes and offices. Amazon and Microsoft are cutting deals with carmakers to integrate their assistants directly into vehicles.

While Amazon and Microsoft have released digital assistant apps for mobile devices running Google and Apple software, the apps are not as widespread and using them is usually not as effortless as the ones Apple and Google build into their devices.

Eventually, Mr. Bezos predicted, the primary assistant on a device will be smart enough to automatically route a person’s request to whichever assistant is best equipped to answer, without needing a verbal introduction between the two.

“In my view of the world, because that would be best for the customer, that’s probably what eventually happens,” he said.

Posted on May 17, 2018, in ConspiracyOz Posts. Bookmark the permalink. Leave a comment.