Domino’s employee speaks out on working conditions, pressure from management 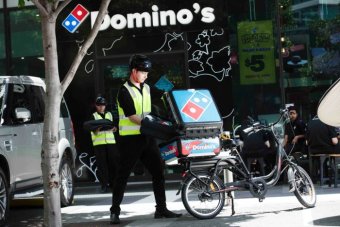 Photo: A Brisbane Domino’s worker claims he was misled by higher-ups and forced to work without breaks. (Supplied: Domino’s)

Marc Petzke makes Pizzas at a Domino’s store in Brisbane.

He claims senior level management are misleading employees about the new enterprise agreement and are “manipulating [and] twisting words”.

Domino’s recently asked employees to vote on whether or not to move off casual agreements and onto part-time contracts.

But Mr Petzke told the ABC that one area manager encouraged staff not to cast their vote.

He claimed the manager informed store workers that head office had already decided employees would move onto part-time positions.

“So the words out of her [area manager’s] mouth was: ‘the agreement’s going to go ahead. Basically it’s 99 per cent approved, so you don’t need to vote’,” Mr Petzke said.

“We’ve spoken with other team members at the meeting and they have a different recollection, but to avoid confusion we’ve held another meeting at the store to go over the agreement again,” he said.

Mr Petzke said he was not invited to attend that meeting. Domino’s insisted all 18,000 employees were consulted on the new agreement.

“And we’ve encouraged them all to vote,” Mr Knight said.

“Team members can vote for or against the agreement in the privacy of their own home electronically.”

But Mr Petzke claimed workers are also being threatened with less work if they are found to be wanting casual work under the new agreement, which he claimed actually leaves employees worse off.

“So they were suggesting that everyone needs to go part-time or you won’t get any hours,” he said.

When the ABC put that claim to the Domino’s chief executive he conceded there would be fewer available casual shifts, but, overall, management was adjusting rosters in response to workers’ preferences.

Photo: Nick Knight says all 18,000 of Domino’s employees were encouraged to vote on a new employment agreement. (Supplied: Domino’s)

“We do need them, but we also need more permanent employees as we continue to grow. And it’s what our team members are telling us what they want.

“There might be fewer casual shifts available in some stores but there are big benefits of being permanent, and a lot of team members are telling us that’s they want.”

The whistleblower claimed it is all an attempt by management to boost the pizza chain’s bottom line, but Mr Knight rejected that idea.

“Just to clarify, team members have just moved off an expired agreement, and will decide to move to a new agreement, or the modern award,” Mr Knight said.

“Either way our team members are going to receive considerably higher benefits than they received last month, including penalty rates.

“The hourly rate between the new agreement and the modern award are very similar, but there are other benefits including a higher number of guaranteed hours, entitlements like holiday pay and sick pay.”

‘Ten-hour shifts without a break’

But Mr Petzke also claimed there were unreasonable working conditions, like little or no breaks during long shifts.

Mr Petzke took his concerns to accounting firm Deloitte — which was appointed by Domino’s earlier this year to carry out an independent assessment of the pizza giant’s efforts to detect and prevent underpayment of wages by franchisees — but he claimed his worries were brushed aside.

“I told her all my concerns,” he said.

“I told her about the meeting, and she didn’t meet me with any empathy, I guess, and she basically said to me ‘Well, what do you want?’.

“And I said, ‘Well I’d like to have a third party come out, explain the agreement to us, and have the vote delayed until that happens’.

Domino’s insisted it is not coercing its staff in any way.

“Not at all, we’re encouraging all employees to have their say and decide what best suits their circumstances and their employment,” Mr Knight said.

Posted on February 2, 2018, in ConspiracyOz Posts. Bookmark the permalink. Leave a comment.