← Mobile phones and Siri-style assistants a growing threat to online security
Whew No Blackouts ….Yet – ConspiracyOz → 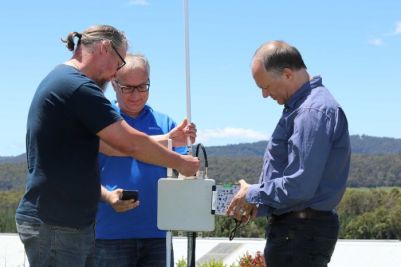 An alert for families of lost dementia sufferers and a smart phone app that can run a farm are among the products that will be tested in Tasmania using a new kind of sensor network.

Antennas that receive and transmit signals for low power and long-range sensors have been installed on buildings in and around Launceston, creating a network know as a LoRaWAN.

Launceston is one of the first cities in Australia to be completely covered by a LoRaWAN, which could make it a testing ground for researchers and businesses that want to test “Internet of Things” products.

The “Internet of Things” is the connection via the internet of everyday objects with computing devices, and could be anything with an on-off switch.

Bitwoke co-founder Peter Padd said he hoped to use the city’s new network to test a product he had been developing to help dementia sufferers and their families.

The software would be built into wearable devices and would use artificial intelligence to learn how the dementia sufferer usually behaved.

If the device’s sensors detected unusual movements or locations, it would send an alert to a family member’s phone.

“Our software will be able to tell when they’re wandering, and based on that, we can then alert families and carers and the clinical community that that patient is wandering and we can intervene a lot sooner,” Mr Padd said.

Mr Padd said he wanted to test the product in health care facilities in Launceston.

“When you want to test a game-changing sort of technology like this, you need really good ubiquitous coverage for it,” he said.

“This [LoRaWAN] pervasive network that they’ve set up here is really good from a patient demographic for us, because it does cover their normal area where they go and work and live and play and so on.”

Farmers promised remote control will ‘save time and money’

A trio of north-west Tasmanian teenagers are using the LoRaWAN to test software they’ve created to allow farmers to control machinery on their farms from their smart phones.

One of the developers of “Control Freaks”, Rory Kelly, said it would save farmers time and money — and was already attracting interest.

“If an irrigator has run into a fence, or if cows need moving, [the farmer] can move his cows without having to drive down to his gate,” he said.

“They’re really wanting us to try to get it out as fast as possible, because they can really see that it’s going to help them.”

Mr Kelly said switching from wi-fi to the LoRaWAN would improve the product.

“It’s very cost effective, and it doesn’t use much power, this gateway, so it’ll be a lot easier to control and use all our devices,” he said.

The LoRaWAN pilot project is being overseen by the CSIRO, the University of Tasmania, and Enterprize Tasmania.

“It’s much higher range, and it’s designed for things that are much lower power,” he said.

“Think of it as instant messaging for machines, so small packets of information, very valuable information, that get transmitted over long distances by machines.”

The pilot project is free for anyone to join.

“The essential idea is to allow anybody and everybody from community, professionals, small businesses, entrepreneurs and even schools to get involved in this exciting paradigm shift in the internet, which is the Internet of Things,” Mr McDarby said.

“We want to be the IT capital of the region, we want all our IT excellence to happen down here in Australia, we want to be the place where people trial and test new ideas, and having networks like this.”

Photo: Chris Luck has automated his home so he can control and monitor power use from his tablet computer. (ABC News: Laura Beavis)

Posted on January 10, 2018, in ConspiracyOz Posts. Bookmark the permalink. Leave a comment.

← Mobile phones and Siri-style assistants a growing threat to online security
Whew No Blackouts ….Yet – ConspiracyOz →