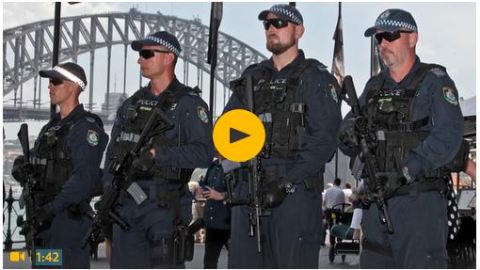 ‘We have to get used to it’: elite New South Wales police get assault rifles – Video

Military-style machine guns will be rolled out for New South Wales riot squad police in time for large gatherings, including New Year’s Eve.

Nearly 50 officers have completed training and will carry the M4 rifles from Monday as part of an increase in security against terrorism.

“I don’t want the public to feel confronted, but I want them not only to be safe, but to also feel safe,” the police commissioner, Mick Fuller, told reporters in Sydney on Monday.

“The crew will be out for the Christmas period and New Year’s Eve from Parramatta across to the Sydney metropolitan area,” he said.

Fuller said while the terrorist threat had been stable since 2014, officers on the street needed to be ready.

“We have put that capability in place and it is an important step for us, in terms of a quick response to support local police and ensure the public is as safe as they possibly can be.”

“Police now have a greater capacity in relation to their firearms and their arsenal, but I think, more so, the community will be comforted by the fact that their police have this capability to keep them safe,” the NSW police minister, Troy Grant, said.

“It is a reality that the world we live in is changing. We wish we didn’t have to move down this path and we hope that these firearms will never need to be used.”

Extending the M4 rifles to the riot squad doubles the number of long-arms weapons in use by NSW police.

Here is a comment to this article (Guardian / Australia) – Mick Raven

Posted on December 29, 2017, in ConspiracyOz Posts. Bookmark the permalink. 2 Comments.