What age is it safe for children to use a standard seatbelt? You’ve probably got it wrong 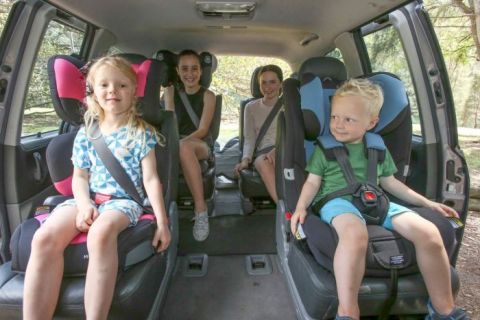 Had Christine Stephens’ seven-year-old daughter, Indiana, been without a booster seat when a truck slammed into their car, no law would have been broken. But Indiana would have been.

After the accident, which happened a month ago on a suburban Sydney street, rescuers told Ms Stephens in no uncertain terms Indiana’s well-fitted booster seat saved her life.

Ms Stephens knew her daughter was far shorter than the 145-150cm height needed for an adult seatbelt to do its job.

This height, recommended by expert guidelines, means the vast majority of seven-year-olds are not safe without a booster seat. Neither are most eight, nine, or even 10-year-olds.

In fact, many 11-year-olds and some 12-year-olds are not tall enough to meet the “five-step test”, which is the ultimate guide to when it is safe for a child can to properly in a seat without a booster.

Due to differences in seat design, the same child might meet the test in one model of car but not in another.

Almost all “tweenagers” (8-12-year-olds) should be sitting in a booster seat.

Work out if your child can move from a car seat to an adult seatbelt with the five-step test:

Source: RACV, based on Best Practice Guidelines for the Safe Restraint of Children Travelling in Motor Vehicles’ by KidSafe and NeuRA from 2013.

Are yours? Mine aren’t. I am one of the many parents who are confused and out of date with this area of parenting.

My 12-year-old daughter is now 145cm and passes the five-step test, but wouldn’t have when she moved out of a booster seat two years ago.

My son is nine, 135cm tall, and does pass the test, yet he started sitting with just an adult seatbelt a few months ago.

Before you dismiss me as a slack parent, hear that my kids sat in a booster seat far longer than their peers.

In our current culture, most kids older than seven do not sit in a booster seat.

Parents who want to meet the guidelines face the very real challenge of convincing their nearly-teenaged kids to act counter to this culture.

Horrified by the school drop-off

One parent who knows the guidelines well is Lucy Burt.

In her professional life as co-owner of Peace’s Child Restraints on Sydney’s Northern Beaches, Ms Burt relishes the opportunity to educate and assist parents to make their cars as safe as possible.

As a parent, she sees how few people are aware of guidelines.

“I’m horrified by what I see at ‘kiss and ride’, at school drop-off,” she says.

Photo: Lucy and Mitchell Burt with their daughters Emma and Phoebe. (Vivienne Pearson)

Using a newer-model booster seat that accommodates heights of 150cm plus, Ms Burt’s two children did stay in a booster seat until they met the five-step test.

Phoebe was nearly 12 when she moved out of her booster.

“I didn’t like it … no-one else really did it,” she says, so embarrassed that she was initially reluctant to even discuss the topic. “You get too mature for it.”

“I didn’t mind being in a booster because I knew it was safer,” she says.

Her different opinion might be personality based, or influenced by the fact that, since she was taller than her sister she stopped sitting in a booster on her 10th birthday — before the onset of puberty and all the emotional and social changes that brings.

What the law says

The tweenager years are a complex time for children and parents, and decisions about child car restraints are made more complex by the seeming mismatch between what is the law and what is safe.

Leaving your child in the car alone

You have a young child asleep in the back of a car, you’ve just filled up with petrol and the time’s come to go inside and pay. Here’s what the law says about what you do next.

The law (section 266 of each state’s road laws) is not as cut and dried as usually quoted.

Two clear options are given for children older than seven: a booster seat or an adult seatbelt.

Seven is the first age an adult seatbelt can be legally used but there is no way the law can be interpreted as saying a booster seat is not needed beyond this age.

Research, recently published in the Journal of the Australian College of Road Safety, revealed 41 per cent of parents surveyed assumed their child would reach 145cm at age seven — perhaps due to confusing the different messages floating around on this topic.

We need a culture change, too

The researchers call for greater education of parents. To that message, I will add that significant culture change also needs to occur.

This would be supported by considering tweenagers as well as their parents in the design of seats and crafting of marketing messages.

The comfort and usability of the seats need to be promoted as well as safety messages.

Retailers need to upskill. Chain stores are generally unaware of the guidelines and do not stock the only model of booster seat that is big enough to fit 145-150cm heights.

Car manufacturers should also be called on to consider their capacity for making car travel safer for tweenagers without a booster seat.

This is particularly important for extended family or others who only occasionally transport this age group in their car.

Language needs to change away from age and heights. Even when these are used as a rough guide, a range should be given rather than a single number.

Hard to go back to a booster

Change is starting to happen. Of the booster seats that fit taller children, Ms Burt says: “We used to have them on the shelf and just dust them. But now they outsell the others four-to-one.”

Will change happen in my family? Will my newfound knowledge prompt me to put my son — who is not quite tall enough to pass the five-step test in our car — back in a booster seat?

I know I should but, after not having sat in a booster seat for months, he isn’t keen and I don’t relish the cost, inconvenience or battle that would be needed to reintroduce one.

There is a long way to go until the majority of Australian children over seven are travelling in the safest way possible in our cars.

Posted on December 26, 2017, in ConspiracyOz Posts. Bookmark the permalink. 1 Comment.