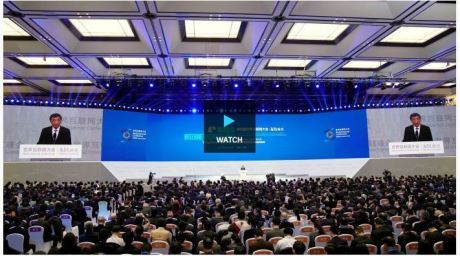 In an eastern Chinese town not too far from Shanghai, cybertechnology leaders and government officials from around the world gathered this week to discuss the future of the global digital economy.

“This year’s theme is set with a hope that we can better embrace the historical opportunities brought by the development of the internet, as well as use the digital economy as a key driving force to promote openness, cooperation, communication and sharing of cyberspace,” Wang Huning, a leading member of the Communist Party, said during his opening speech to the fourth World Internet Conference in Wuzhen.

However, beyond the usual deluge of platitudes and jargon that generally tend to accompany technological events, two key elements set this year’s conference apart, marking a potential shift in power in the ongoing race for global digital domination.

One is that this year’s event marks the first time that leading Western cybertechnology trailblazers — including Apple CEO Tim Cook, Google CEO Sundar Pichai, and Facebook executives; whose many platforms are banned in China — attended the conference, which was previously a fairly local, state-run affair criticised internationally for its promotion of censorship and control.

As President Xi Jinping reiterated during an opening statement on Sunday, China’s cyberspace channels are “entering a fast lane [and] will become more and more open” — however, he maintained, “cyber sovereignty” will most definitely remain a key part of China’s vision of global internet expansion.

Cyber sovereignty is the idea that states should be permitted to manage and contain their own internet without interference.

As observers noted, the high-profile attendance of American technology leaders at a Chinese conference promoting Beijing’s vision of a censored internet highlights the dilemma for Western tech companies trying to break into in an increasingly crucial and lucrative yet restricted market.

We asked what you thought about the Digital Silk Road. Read the discussion in the comments.

‘What will China export via the Digital Silk Road?’

The second element that set this year’s conference apart is that woven in between the broader themes of global cooperation in the internet-era and the like, China appeared to be unveiling a tangible vision for the future of a “Digital Silk Road” as part of the country’s One Belt, One Road initiative.

Photo: Apple CEO Tim Cook is greeted in Wuzhen ahead of the conference. (Reuters: Aly Song)

The promotion of the Digital Silk Road — which has been portrayed as a central element of the event in the Chinese press — seems to have been largely overlooked in the Western media, which is still concerned about the details of Beijing’s digital censorship.

“Beijing will lead the construction of the digital era equivalent of the World Trade Organisation, layout down the infrastructure of a ‘Digital Silk Road’ through its One Belt, One Road initiative,” Wang Huiyao, founder and president of Centre for China and Globalisation (CCG), said in an event interview.

“There has always been the question: What will China export via the Digital Silk Road? The answer has long been evident: a digital economic infrastructure that will allow China’s technological prowess to go global.”

In 2016, China’s digital economy — which consists of some 700 million internet and mobile users — grew by nearly 20 per cent and contributed 22.6 trillion yuan ($4.38 trillion) to the country’s economy, according to national communications officials. And 2017 has shown no sign of that growth stopping.

The Digital Silk Road has been floated around as a poorly understood catchphrase over the last few months since the official launch of the One Belt, One Road initiative this year, but this time it comes on the heels of a series of global deals and agreements signed by Beijing and various governments around the world.

Is China readying for digital domination?

Photo: Active and planned submarine cable systems and their landing stations in the region. (Supplied: TeleGeography)

At the conference, Saudi Arabia, Egypt, Turkey, Thailand, Laos, Serbia, and the United Arab Emirates (UAE) were among several of the countries that openly “agreed to cooperate with China in the digital economy to build an interconnected Digital Silk Road,” Chinese state media outlets announced.

According to the reports, together, the eight countries will expand broadband access, promote a digital transformation, encourage e-commerce cooperation, as well as seek to encourage policy-making to create a transparent digital economy and promote cooperation in international standardisation.

Video: The Next Factory of the World: How Chinese Investment is Reshaping Africa (The World)

Wang Jing, founder and CEO of JingChi Corporation, added: “China is a key player in this mobile internet trend, and it is very likely that China will seize the leadership in the next few years.”

The announcement of a strengthening Digital Silk Road also comes amid concerns of Chinese digital expansion on Australia’s own doorsteps throughout the Pacific, which were later reportedly countered by deals from the Australian Government.

“We saw in Solomon Islands a few months ago Huawei announced that they would be delivering a cable from Solomon Islands into Australia’s cable network,” Jonathan Pryke, director of the Pacific Islands Program at the Lowy Institute, told the ABC last month.

“That results in some really significant national security issues for Australia.

“Having a Chinese state-owned enterprise connecting up to a piece of critical domestic infrastructure is pretty unpalatable for the Australian Government.”

But this week, American computer scientist and Turing Award recipient John Hopcroft said in an interview at the Wuzhen conference that the “world is undergoing a vast information revolution — like the agrarian revolution and the industrial revolution — in which the definition of society and work is to be rewritten”.

“China will become a leader in innovation in science, engineering and even human well-being [and] it will make a significant contribution to social change and ways to improve human survival,” Mr Hopcroft said.

‘Technological shift from West to East’

But in an increasingly globalised world and amid a kickback via US President Donald Trump’s anti-globalisation policy pushes, American technology companies and Western innovation are inevitably going to find themselves at a crossroads.

At the Wuzhen conference, Apple CEO Tim Cook said that developers using his company’s platforms had made up to $US17 billion from app sales in China — representing roughly a quarter of its total global App Store earnings — despite self-censorship concerns from rights groups.

Meanwhile, Mr Cook added that “the theme of this conference — developing a digital economy for openness and shared benefits — is a vision we at Apple share” which critics slammed as hypocritical given that Apple admitted it bowed to pressure in August to remove apps from its catalogue that the Chinese Government did not approve of.

But experts maintain China’s digital evolution and growth is now inevitable, and that world leaders must be prepared to get on board and compromise with Beijing’s vision of a digital future.

“The progress of China in the last five years is unbelievable,” said Luigi Gambardella, the president of ChinaEU, a non-profit organisation promoting digital cooperation between Europe and Asia, adding that “Xi Jinping will make China thrive in the digital age.”

“There has been a technological shift from the West to the East with the rise of internet champions in China as an alternative to the US monopoly,” Mr Villepin said.

“The Chinese authorities have proven their willingness to position China as a cyber power expanding internet services from Asia to Europe and Africa along the Digital Silk Road.”

Speaking at the conference, Jack Ma, the founder and executive chairman of Chinese e-commerce giant Alibaba, said a third technological revolution was on the horizon, but expressed hope that it would not lead to conflicts, but rather, increased global cooperation.

“But it will not be a war where countries fight with one another, but a war to fight against disease, poverty, and climate change through our joint efforts.”

Posted on December 13, 2017, in ConspiracyOz Posts. Bookmark the permalink. 1 Comment.