← Gay Frog Water! – ConspiracyOz
Not bothered who can see your digital data? You might have ‘surveillance apathy’ →

(Natural News) For years, I’ve warned that humanity is a suicide cult which has engineered its own destruction by relentlessly poisoning the natural world with chemical pesticides, heavy metals and GMOs.

Now, the collapse of living systems across the planet is accelerating like never before, with ocean fisheries collapsing by the day, topsoil vanishing by the inch, and wildlife populations being decimated by the accelerating destruction of habitat.

Humanity, it seems, has broken the planet, and the mass die-offs are now impossible to ignore. Adding even more weight to the horrifying realization that humanity is committing mass ecological suicide, a new study published in the science journal PLoS One has documented a 75 percent decline in insect biomass over rural Germany in just the last 27 years.

The study, authored by Caspar A. Hallmann and others, is entitled, “More than 75 percent decline over 27 years in total flying insect biomass in protected areas.”

The abstract of the study, which should be screaming alarm bells over the devastating collapse of the food chain in Europe, reports rather mildly:

Our analysis estimates a seasonal decline of 76%, and mid-summer decline of 82% in flying insect biomass over the 27 years of study. We show that this decline is apparent regardless of habitat type, while changes in weather, land use, and habitat characteristics cannot explain this overall decline.

This yet unrecognized loss of insect biomass must be taken into account in evaluating declines in abundance of species depending on insects as a food source, and ecosystem functioning in the European landscape.

Even more concerning is the fact that this insect decline was observed in “protected areas” that are supposed to preserve and protect wildlife. As the study authors explain in their conclusion:

The widespread insect biomass decline is alarming, ever more so as all traps were placed in protected areas that are meant to preserve ecosystem functions and biodiversity… our results illustrate an ongoing and rapid decline in total amount of airborne insects active in space and time.

The food web is now collapsing… insects are just the beginning

The stunning news of this insect biomass collapse is, of course, just the beginning of a series of events that will ultimately spell doom for humanity unless causative factors are quickly reversed. Insects are the pillars of the food web, providing protein and nutrients to bats, birds and reptiles, among other animals. When the insect population collapses, nutrient depletion cascades up the food chain, causing devastating declines in populations of larger animals upon which ecological diversity depends.

As the study authors explain:

[The insect biomass collapse] must have cascading effects across trophic levels and numerous other ecosystem effects. There is an urgent need to uncover the causes of this decline, its geographical extent, and to understand the ramifications of the decline for ecosystems and ecosystem services.

Even more worrisome, insects are the pollinators that keep 80% of wild plants alive by facilitating pollination. When insect populations collapse, pollination of wild food sources — as well as many domesticated food sources such as almonds — also face imminent collapse.

Without insects, in other words, human populations will also collapse within just a few years as the ripple effect of insect die-offs works its way up the food chain.

The rapid timetable of this collapse is nothing short of alarming, if not catastrophic. As the chart shows, below — sourced from the PLoS One journal article — the biomass decline from 1989 to 2016 is catastrophic.

The second chart, below, shows how insect biomass loss is even more pronounced during summer months: 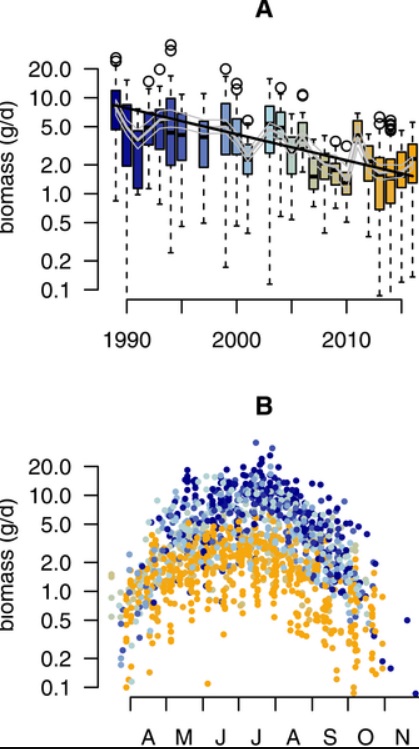 In other words, “global warming” actually increases insect biomass, so this is one phenomenon that can’t be blamed on the climate change hoax. From the study results:

Over the course of the study period, some temporal changes occurred in the means of the weather variables (S2 Fig), most notably an increase by 0.5°C in mean temperature and a decline 0.2 m/sec in mean wind speed. Yet, these changes either do not have an effect on insect biomass (e.g. wind speed) either are expected to positively affected insect biomass (e.g. increased temperature).

In fact, the paper points out that warming temperatures are actually saving the insects to some degree by compensating for some other factor that’s killing them off:

Our final model, based on including all significant variables from previous models, revealed a higher trend coefficient as compared to our basic model (log(λ) = −0.081, sd = 0.006, Table 4), suggesting that temporal developments in the considered explanatory variables counteracted biomass decline to some degree, leading to an even more negative coefficient for the annual trend.

The study authors were unable to pinpoint a specific cause for the collapse of insect biomass, but that’s likely because they did not measure pesticide exposure, GMO pollution or other chemical contaminants that severely impact insect populations.

Even without that knowledge, the study authors concluded the rapid decline in insect biomass was catastrophic:

Our results demonstrate that recently reported declines in several taxa such as butterflies [7, 25–27, 58], wild bees [8–14] and moths [15–18], are in parallel with a severe loss of total aerial insect biomass, suggesting that it is not only the vulnerable species, but the flying insect community as a whole, that has been decimated over the last few decades…

The authors also affirm they are aware that pesticide exposure could be one of the plausible explanations for the collapse, stating:

Agricultural intensification (e.g. pesticide usage, year-round tillage, increased use of fertilizers and frequency of agronomic measures) that we could not incorporate in our analyses, may form a plausible cause. The reserves in which the traps were placed are of limited size in this typical fragmented West-European landscape, and almost all locations (94%) are enclosed by agricultural fields.

Intensive agricultural practices, in other words, are a primary suspect in this devastation of insect populations. And that points directly to pesticides and herbicides — chemical poisons that are developed specifically to kill living things.

Unless something changes, humanity won’t even survive long enough to cause sustained global warming

All this brings me to (at least) one obvious point: While the left-wing media and science talking heads are losing their minds over so-called “climate change” — an entirely made-up problem — even their own predictions only show tiny increases in ocean levels over the next hundred years.

Yet the collapse of insect populations is happening now, with devastating consequences already initiated that may spell doom for a global human population of over 7 billion people, all of whom demand food on a regular basis. Without insects, the food supply collapses. Without food, human populations collapse. And without humans, there is no sustained global warming problem to worry about anyway.

In other words, climate change alarmists are focusing on the wrong crisis. If we don’t figure out what’s decimating the insects — and it’s very likely agricultural chemical contamination of our world — then nobody will be around to burn fossil fuels and run the coal plants anyway. Global warming, in other words, is not a problem if everybody dies from starvation because the global food web collapses.

Yet isn’t it fascinating how the entire climate change cult that demands totalitarian control over our lives in order to “save the planet” absolutely refuses to acknowledge any consequences whatsoever from agricultural pesticides and GMO genetic pollution?

While the natural world is collapsing around them, all they wish for is more power, profit and control over nations and economies.

These science imbeciles are ignoring the real causes of catastrophic collapse, all while patting themselves on the back and proclaiming they are the science saviors of our world: Al Gore, Neil DeGrasse Tyson, Bill Nye and other climate change cultists who typify the idiocy-celebrity status of those who hide behind fake science to portray themselves as Christ-like saviors for a world that’s crumbling for reasons they absolutely refuse to acknowledge.

That’s why I’ve dubbed humanity a “suicide cult.” No one in a position of power cares about anything other than their own fame, fortune and perceived brilliance.

No one in a position of authority has any empathy or compassion for preserving the natural world and its essential ecosystems.

Every sector of politics has been exploited, distorted and reformed into idiotic propaganda parades featuring a steady stream of academic morons who reject scientific reason in favor of political obedience and left-wing conformity.

Consequently, “science” is dead. And soon, unless something drastically changes, humanity will be too.

Posted on November 8, 2017, in ConspiracyOz Posts. Bookmark the permalink. Leave a comment.

← Gay Frog Water! – ConspiracyOz
Not bothered who can see your digital data? You might have ‘surveillance apathy’ →