← Big data meets Big Brother as China moves to rate its citizens
George Soros prepares for all out war. Pours $18 billion of his own cash into his Open Society Foundations →

What’s wrong with eating a juicy cube of celebrity meat?

You could soon be dining on lab-grown celebrity canapés and lightly-seasoned chunks of your loved ones. But is the world ready for synthesised cannibalism? 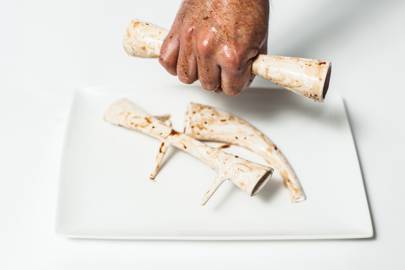 Human cannibalism has been known to transmit debilitating diseases. But lab-grown human meat would carry no such risks

What if you could tuck into a juicy human burger that was guaranteed cruelty-free? No-one has to lose a shoulder for your Sunday roast; no-one gets their leg sawn off for your signature slow-cooked tagine. No-one even has to die these days. In the not-too-distant future, we could all be tucking into lab-grown meaty cubes of our favourite celebrities. Or eating a synthesised slab of newlyweds to mark the special day.

“In the West, this is a huge taboo,” says Dr. Bill Schutt, professor of biology, research associate in residence at the American Museum of Natural History and author of Eat Me: A Natural and Unnatural History of Cannibalism. “Especially the medicinal cannibalism that took place relatively recently in Europe. I think it was something that people probably weren’t particularly proud of, once they discovered that modern medicine had better solutions than eating body parts.”

In 2017, salves and tinctures made from people have fallen out of fashion with pharmacists. But what about the restaurant up the road? In 2013, scientists from the Netherlands proved that we can make animal meat in a lab from cell cultures into beef burgers (the first, which cost £215,000 to make was, apparently, “not that juicy”). But there is a difference between eating a cow and eating cow. 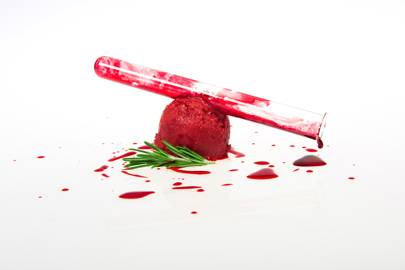 Lab-grown meat could allow people to eat as much meat as they want. But will human ice cream be on the menu?

The latter is a massive win for cows. Cheek swab beats boltgun. For diners, too; once you factor in how much of your bill goes into breeding and sustaining livestock. There’s also no animal cruelty in a petri dish. With nothing more invasive than a cotton bud, anyone could eat as much beef as they like without harming a single cow.

Or as much human.

Dr. Koert Van Mensvoort, director of the Next Nature Network and fellow at the Eindhoven University of Technology, is the man behind what is probably the worst (but in a good way) cookbook you could ever hope to buy. The In Vitro Meat Cookbook contains recipes for over 40 dishes – none of which you can actually make. Yet. Each entry is illustrated, with an accompanying list of ingredients (all centred around lab-grown meat), a gleefully morbid description, and a five-star rating system of scientific feasibility. One star: we’re a long ways off. Five stars: Set the table! And use the good cutlery – we’re eating guests.

“I started writing the book because I was already in contact with some of the biotechnology companies that had been developing in vitro meat for years,” says Van Mensvoort. “And what was striking was that they were trying to make the same kinds of sausages and burgers that we already know. That sounded weird to me, like how people called the first cars horseless carriages. So I decided to step into their space and explore the creative design: what could be on our plates in the future because of this new technology?”

The In Vitro Meat Cookbook is really a cookbook in name only. It’s an art project, a conversation starter. There’s a recipe for knitted meat (“a festive centrepiece” to replace the Christmas turkey, four stars) and Dodo Nuggets (“The dodo has returned! To the dinner table”, also four stars).

Only towards the very end do things start turning shades of Soylent Green. Would sir or madame care for a Celebrity Cube? Cells swabbed from today’s hottest stars, grown into cubic canapes and speared on cocktail sticks. “Give European royalty a try before the next coronation,” the book suggests. Which would certainly change the atmosphere on The Mall. Celebrity Cubes might be feasible – if you can grow mutton, you can grow Miley – but even without a sacrificial lamb, any company hoping to sell lab-grown human flesh will, says Van Mensvoort, be selling to a market that is exclusive and esoteric in equal measure.

“In general, I think there will be huge reluctance against in vitro human meat,” he says. “It will be very, very niche. Maybe a very haute-cuisine restaurant will offer this once-in-a-lifetime, special experience for which you pay a lot of money. Or it could be a ritual: when you get married, you consume a piece of each other’s meat, just that once. I’m not promoting it, I just think it’s a fascinating conversation to have. The problems are much more social and cultural than technical or medical.”

But, providing the cell donor is informed and consenting, what is the problem? What is it about the image of a half-dozen friends, laughing and chatting in between mouthfuls of each other, that makes it so innately ghoulish? One plausible answer is that it’s ingrained that eating members of our own species is bad for us. Other animals – the list is longer and fluffier than you would hope – do it all the time. But at least in mammals, cannibalism is usually a product of extreme circumstance: food scarcity, environmental stressors, or one group fighting another and then eating infant usurpers. 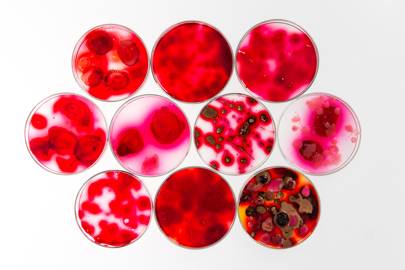 The first lab-grown meat was formed into a beef burger that cost £215,000, but proponents of the technique are confident costs will come down

But cannibalism can still be inherently dangerous for the animal doing the eating. The most successful diseases are specialists – adapted over hundreds of thousands of years to thrive in a particular species. Zoonotic diseases (diseases which jump from animals to humans, such as Ebola) aside, a disease that is very good at infecting a chicken is probably not going to be very good at infecting a person. But if, as a person, you eat meat from another person who was carrying a disease, you’re in trouble.

Which brings us to the most infamous case of disease passed through human-to-human cannibalism by the Fore (pronounced ‘for-ay’) people of Papua New Guinea. Kuru is a disease tied to Fore funeral tradition, in which the family of the deceased ate their remains rather than burn or bury them. It was considered a deeply respectful practice, totally removed from the racist and fictitious accounts of fearsome cannibal savages that made for such good reading in colonial times. Kuru itself, however, is fearsome. It is savage. And it is a product of cannibalism.

Kuru causes victims’ muscles to spasm and seize. Dementia follows with random and uncontrollable laughing or crying, and finally death as the disease eats away at the connection between brain and body. In the late 1950’s, researchers at the National Institute for Health in the US made two deeply unsettling discoveries: first, that the samples from the deceased victims showed no trace of infection – their bodies hadn’t recognised Kuru as disease. And second: the victims’ cerebellums (the part of the lower brain that controls coordination of the body’s muscles) were riddled with holes.

Closer to home, the UK has seen outbreaks of similar diseases – though thankfully not as a result of human cannibalism. BSE also falls under the umbrella of transmissible spongiform encephalopathies (TSEs) and presents similarly to Kuru. In 1987, an increase in the reuse of cow remains being fed to cattle was declared the cause by the British government, with stringent controls introduced the next year. TSEs make for grisly warnings against eating your own, whatever your species.

But the TSEs we know about are also all products of unsanitary food production. Would we have to worry about them – or infections – hiding in packets of lab-grown man-flank? “I don’t think it would happen, because you’d know that these were not diseased cells,” says Schutt, referring to any form of lab-grown meat. “So if you cultured human cells, unless you cultured them from someone who was infected with Kuru, then you wouldn’t have that problem. There’s no contamination coming in from other cells, because you’re starting out with just a couple, and they are replicating. It ties into the idea that you’d have less disease if you were culturing a chicken cutlet. By the same token, you would probably have much less chance of producing a diseased human tissue culture.” 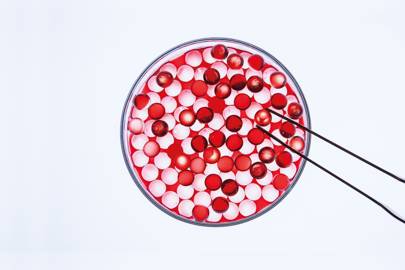 But even with the promise of clean human meat taken as read, there’s one final, potentially lethal (thankfully for the product, rather than the consumer), problem: marketing. Or, as bioethicists might put it: the yuck factor. “The yuck factor is an emotional, not necessarily logical, response,” says Dr. John Loike, director of special programmes at Columbia’s Centre for Bioethics. “So, I think it would be more applicable to the use of human stem cells to generate meat, and would not really apply to animals such as fish or poultry.”

The yuck factor has a contentious history in bioethics. It’s a philosophical dodge move; a way of agreeing that there might be nothing logically wrong with the idea of, say, cloning a human being (or even bits of one to make into burgers), it’s just wrong intuitively. But commodification of the human body is not a new problem, says Loike. “We sell blood. We sell sperm. We sell eggs. There’s nothing you can do about it, even though it’s not the ideal situation. This whole process has been going for decades,” he says. And the potential uptake of lab-grown human meat, he adds, will be entirely market-driven. “I think if something’s not accepted well, then the market is going to say, ‘Well, we don’t want this’. It’s not going to be an ethical or bioethical decision made by some government or agency or scientific group. It’s more to do with what the culture and the population and the ultimately the consumers believe. I would not support it, but I’d respect their personal decision. There’s no harm in doing this; one does not cause any health risks or harm as far as we know, so I don’t see any problems.”

In the not-so-distant future, then, there will be no obvious technical hurdle to growing human meat for consumption. It will probably be safe to eat and comparable to any other meat that comes from a laboratory. An inherent horror will probably keep it off the supermarket shelves and menus of all but the most curious individuals and eccentric restaurants. But, if your really want to, you will be able to have your steak and eat it.

← Big data meets Big Brother as China moves to rate its citizens
George Soros prepares for all out war. Pours $18 billion of his own cash into his Open Society Foundations →