I want to Ride my Bicycle? – ConspiracyOz

Councils say they may have to crack down on rental bikes after they turned up in creeks, on top of bus stops, rooftops, and abandoned in garden beds.

Over 2,000 oBikes are already in operation in Sydney, Melbourne and Adelaide, with the company launching in Australia in mid-June.

The bikes can be accessed and unlocked with an app, ridden and then dropped off anywhere, which has resulted in them turning up in strange places. 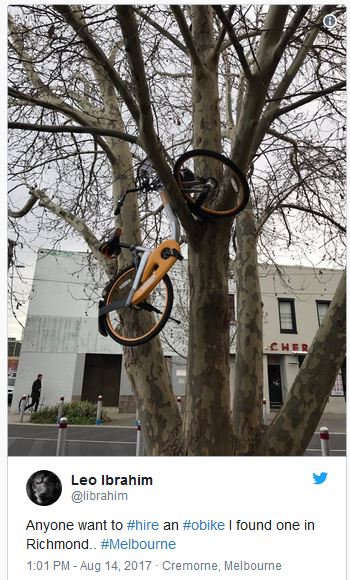 Social media users have photographed the share-bikes in trees, on roofs and even in the Yarra River.

In Melbourne, they have been called “clutter” by Lord Mayor Robert Doyle, who has also threatened to ban them.

A City of Melbourne spokesperson said the council has so far impounded 30 oBikes that were cluttering footpaths and obstructing pedestrians.

“The bikes were held for 7 days prior to being sent to a recycling facility this week where they will be turned into scrap metal,” the spokesperson said.

“oBike failed to collect them within this timeframe and pay the $50 per bike collection fee.”

That sparked a nervous Adelaide Lord Mayor Martin Haese to start thinking about the right way to ensure the rollout did not turn into a “disaster” as in Melbourne.

Meanwhile, the Waverley Council said share-bikes were being “strewn all over the place” in the eastern suburbs of Sydney once they are used by the public.

Waverley Mayor John Wakefield said while they were “a good idea” he believed there were some “teething problems” since bike sharing started in the area in the last few months.

“There’s an uncontrolled proliferation of them in streets,” he said.

“There are areas where there’s large numbers of them congregating on corners, verges, houses.

Mr Wakefield said the council had received one formal complaint and was considering its options after lots of comments from residents and business owners.

“They are becoming a bit of a pest,” he said.

“One of the things we could do and are thinking about is to require the bikes be returned to a specific depot point.”

“The other alternative is for the commercial operators to regularly, perhaps once a week or once a day, to get around and clean them up or reposition them”

“They’re a great idea but there are some clear negatives that are starting to appear.”

Response from Melbourne ‘disappointing’ for oBike

oBike’s head of marketing in Australia, Chethan Rangaswamy, said the response coming out of Melbourne was “disappointing to see”.

However, he said the company had increased its resources to move more bikes from problem areas and was working on improving its data to determine where people were using its app and bikes.

“When we see the bikes being ridden to a particular location more often, our teams are going out there on a regular basis and redeploy those to hot spots,” he said.