Holden on to the Dream – ConspiracyOz 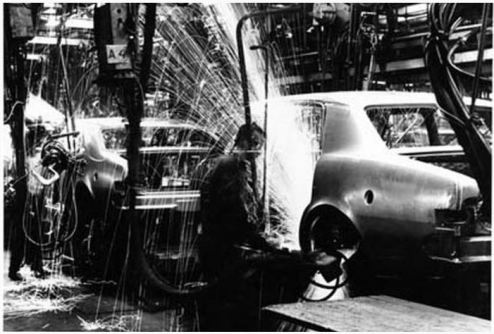 Photo: A section of GMH assembly line in 1968. (Supplied: oldholden.com)

The sounding of the end of shift siren at the Holden plant at Elizabeth on Friday, October 20, 2017 means the closure of the factory, and the end, for the foreseeable future, of car manufacturing in this country.

It’s a turning point in our history and an emotional moment, not least for the hundreds of workers walking out the gate.

Holden is an ongoing brand, but from now on the cars will be imported.

Holden began as an Adelaide saddlery and converted to car body building during World War I.

In 1923 Holden’s Motor Body Builders expanded from King William Street to a new factory at Woodville.

New General Motors plants were built in Brisbane, Sydney, Melbourne, Adelaide and Perth where the complete cars were assembled using the Australian-made bodies and imported engines and chassis.

By 1929, Holden was employing 3,500 people and was the largest car body builder in the Commonwealth.

Then the Great Depression hit.

Photo: Laurence Hartnett was sent to Australia to manage GMH and was told to make it profitable or shut it down. (Supplied: Australian War Memorial)

They sent out Laurence Hartnett, their manager at Vauxhall in England, to either make GMH profitable or close it down.

Hartnett was impressed by the workers at the Woodville body plant and soon turned the company around.

Hartnett was a fascinating man; a dynamo, an innovator, and a brilliant manager.

In the mid-1930s, way before he had permission from General Motors headquarters in America, he was already thinking of making his own Australian car.

Photo: Wartime Production at the Woodville Tool and Die Shop, circa 1943. (Supplied: GMH)

When World War II began, Australia was cut off from overseas supplies.

Forced to build everything itself, the nation made huge advances in manufacturing including weapons and aeroplanes.

The Chifley Labor government was determined Australia should build its own car.

This was to avoid reliance on overseas supply chains, to provide work and rebuild the post-war economy.

Photo: Bumper bars being made by Holden staff at the Woodville plant. (Supplied: State Library of South Australia)

There were doubts at General Motors’ head office about the profitability of making a new car in a country with such a small domestic market.

The Chifley government announced it would build the car itself if the existing companies wouldn’t.

Hartnett managed to get approval, but no financial backing from General Motors for the project, so the Commonwealth and Adelaide Banks stepped in with loans.

By 1947 however, relations had deteriorated between Hartnett and General Motors.

The company replaced him as managing director, meaning the man who was in many ways the father of the first Holden, was out.

He wasn’t even invited to the launch of the car the next year.

That first Holden, the 48-215 which became known as the FX, was an instant success with the Australian public, and GMH soon repaid their loans to the Commonwealth and Adelaide Banks.

They dominated the local market and exported cars to Asia, not the other way around.

By 1962 the millionth Holden came off the line.

Ten plants around the country employed thousands of workers.

The Elizabeth plant was set up as part of a new satellite city to Adelaide.

South Australian premier Tom Playford gave the land to GMH before he even owned it, and had to do some rapid negotiation to buy the property from a local farmer.

Designed to be a model plant with lawns, fountains and trees, it opened in 1960.

He started as a 16-year-old migrant who had just arrived from England with his family.

“We were all migrants in the same boat,” he said.

“It was a mass of humanity. It was noisy, it looked like chaos but it was very well organised.

“At the time we were building 240 bodies a day, so a car came off the line every minute.”

While the Holden was Australian-produced, a lot of the strategic and styling decisions were made in New York or Detroit.

In the thrall of GM America which was producing more and more powerful cars, they didn’t see the energy crisis coming, or take enough regard of the rise of smaller Japanese cars with their smart accessories as standard fittings.

Photo: Production of the HK at Holden. (Supplied: oldholden.com)

Some people saw the change coming but were ignored.

After he resigned from GMH, Laurence Hartnett tried unsuccessfully to produce his own small car, but he did succeed in establishing the importation of Datsuns.

It’s ironic that the father of the Holden helped usher in its greatest threat.

Holden and other makers eventually adapted to the small car market, but their slowness to react meant they had a lot of ground to make up.

The Elizabeth plant is so large it has its own streets named after famous car models like Torana and Commodore.

In its heyday when three shifts worked around the clock, it even had its own bank, and a massive social program of concerts and other entertainment.

In 1977 General Motors America began cutting back its overseas factories.

Then came radical tariff cuts with the Button plan in 1984.

Combined with the high Australian dollar, high wages, import barriers in Asia, and the refusal of further government subsidies, Australia finds itself today at the end of car manufacturing.

When she was 19, Jody Williams started as a door-trim girl at Holden’s Elizabeth plant.

She worked her way up to be the first female supervisor in paint shop, then a manager in human resources.

When asked how she would feel when that last car came off the line she said “sad, immensely proud”.

“We’ve worked really hard to build a great legacy that the new sales company can springboard from,” she said.

“I’ll probably cry a lot, then go for a drink, and probably visit the plant a couple of times, sit out the front for a bit and look at the lion emblem just until I can wean myself off it.”

Since the beginning of the 20th century, car manufacturing has employed tens of thousands of workers in Australia. Now consigned to history, it remains to be seen if we will ever see it rise again.

Mike Ladd’s two-part documentary on the history of Holden will be on Radio National’s Earshot Monday, October 16 and Tuesday, October 17.

Photo: The Holden factory will close its doors on October 20. (ABC: Malcolm Sutton)