Coffin up a Storm – ConspiracyOz

Do-it-yourself (DIY) coffin-making is catching on around the country, and around the world, offering a cheaper alternative to buying a casket.

The ABC first met the Community Coffin Club at Ulverstone in Tasmania’s north-west earlier this year, where mentors help people make coffins for themselves and their families.

She was contacted by dozens of people online asking her to share coffin designs and tips about how to start a club.

“There were men’s sheds in New South Wales, and there were some people in Victoria,” she said.

“There were inquiries from Queensland, South Australia and also as far away as Ohio and Canada and Yorkshire in England.”

Hobart to get coffin club

West Moonah Community Shed supervisor Simon Fraser said he was hoping to launch a coffin club in Hobart by the end of the year.

“I saw that story and thought, wow, that’s a fantastic idea that would run really well in Southern Tasmania,” he said.

“[Death] is not something that we talk about with ease, so I think it’s a good idea to look at ways of breaking down some of that taboo and making it easier for people to face up to mortality and to talk about it with each other.”

Photo: Declan Banim says he plans to use his casket as a bookshelf until he needs it. (ABC News: Carla Howarth)

“I don’t see a reason why you couldn’t build a coffin for less than $300 worth of materials as long as you’re willing to put in the time and effort,” he said.

“I think there is a section of the community who are quite interested in it, particularly when you have the ability to personalise your coffin.

“There are coffins that can be used as a book shelf until the time comes.

“You can get clever with the design of the coffin so it’s not just sitting around in the corner of the shed waiting for its use.”

He said the men’s sheds were trying to gauge community interest.

“Then we can go to the next step of really nailing down when the program would run and who would be supervising with the construction.”

Ronnie Clarkson, a wedding and funeral celebrant in regional Victoria, said she had support from locals for her plans to start a coffin club.

“People are really interested, and it sounds strange, but quite excited. They’re not adverse to the idea,” she said.

“We’d like to make coffins for babies and children, that can be donated.” 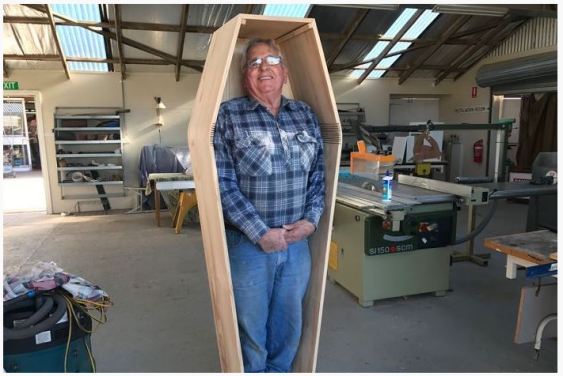 Ms Clarkson is hoping to start a club at the men’s shed in Yarram in Gippsland early next year.

“I spoke to some of the men down there, because I wouldn’t know one end of a saw from another,” she said.

“They were really interested and said: ‘Yeah, we would like to be involved with that. We can give you the technical know how, we’ve got the equipment, we’ve got the space’.

“We’re doing it to start a conversation about death.”